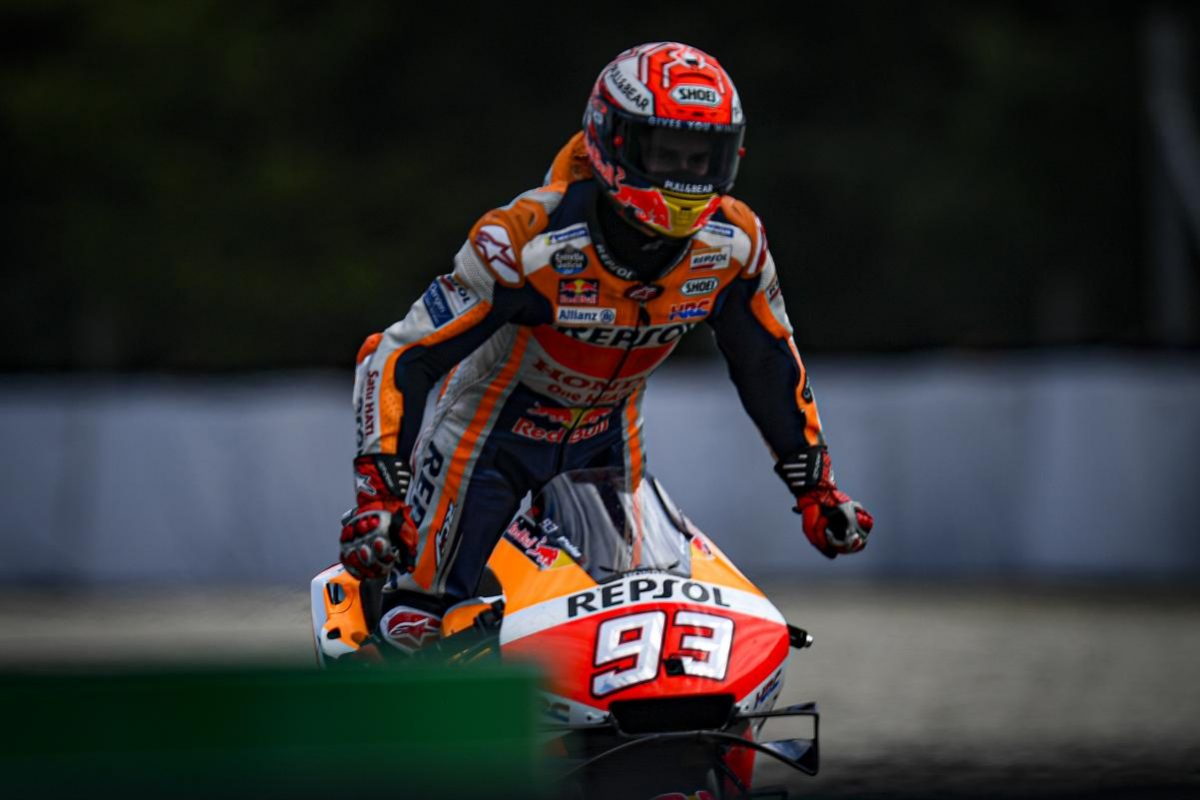 Marc Marquez has taken his 50th premier class race win at the Czech MotoGP as Jack Miller finished on the podium for a second time this season.

Marquez made a great getaway from pole and stayed in front all the way, Andrea Dovizioso followed him from start to finish, while Miller put a late move on Alex Rins to claim third.

The start was delayed by over half an hour due to a pre-race shower which left only part of the Automotodrom Brno wet, and the race was shortened from 21 laps to 20.

When it did get underway, Marquez launched clear of the field as Dovizioso leapt from the second row to second position and Miller, who qualified second, slotted into third.

Rins passed Miller at Turn 3 on Lap 3 and that was the order in which the top four remained for most of the race.

They ran together for the first 10 laps before stringing out, with Marquez in particular turning the wick up on his Repsol Honda.

He extended his lead past one second on Lap 13 and two seconds on the next lap, and it was then that Rins looked a threat to Dovizioso’s second position.

Rins, however, soon lost touch with the Mission Winnow Ducati and instead fell into the clutches of the Pramac Ducati of Miller.

The Queenslander took third place from Rins on the penultimate lap, failing to make his first move on the Suzuki Ecstar entry stick at Turn 1 but getting the job done at Turn 5.

Marquez had one scare when he nearly folded the front of his Honda at Turn 10 on Lap 12 but was otherwise comfortable as he started the final lap with a lead of 3.3s.

His championship lead over Dovizioso is now 63 points with nine races to go in 2019.

Rins ended up more than a second behind Miller, while Cal Crutchlow came from 11th on the grid to finish fifth on his Castrol LCR Honda.

Valentino Rossi (Monster Energy Yamaha) lost touch with the top four when he got stuck behind Pol Espargaro (Red Bull KTM Factory) early on, and ultimately took the chequered flag in sixth having been passed by Crutchlow on Lap 8.

Pol Espargaro faded to 11th while team-mate Johann Zarco plummeted from the front row to 12th on Lap 1 alone and eventually got home in 14th.

Zarco also played a part in two of the three DNFs, given that his contact with Franco Morbidelli at the fourth corner saw the latter’s Petronas SRT Yamaha go down and take Joan Mir’s Suzuki with it.

There is an official test on Monday (local time) before Round 11 at Austria’s Red Bull Ring next weekend (August 9-11).