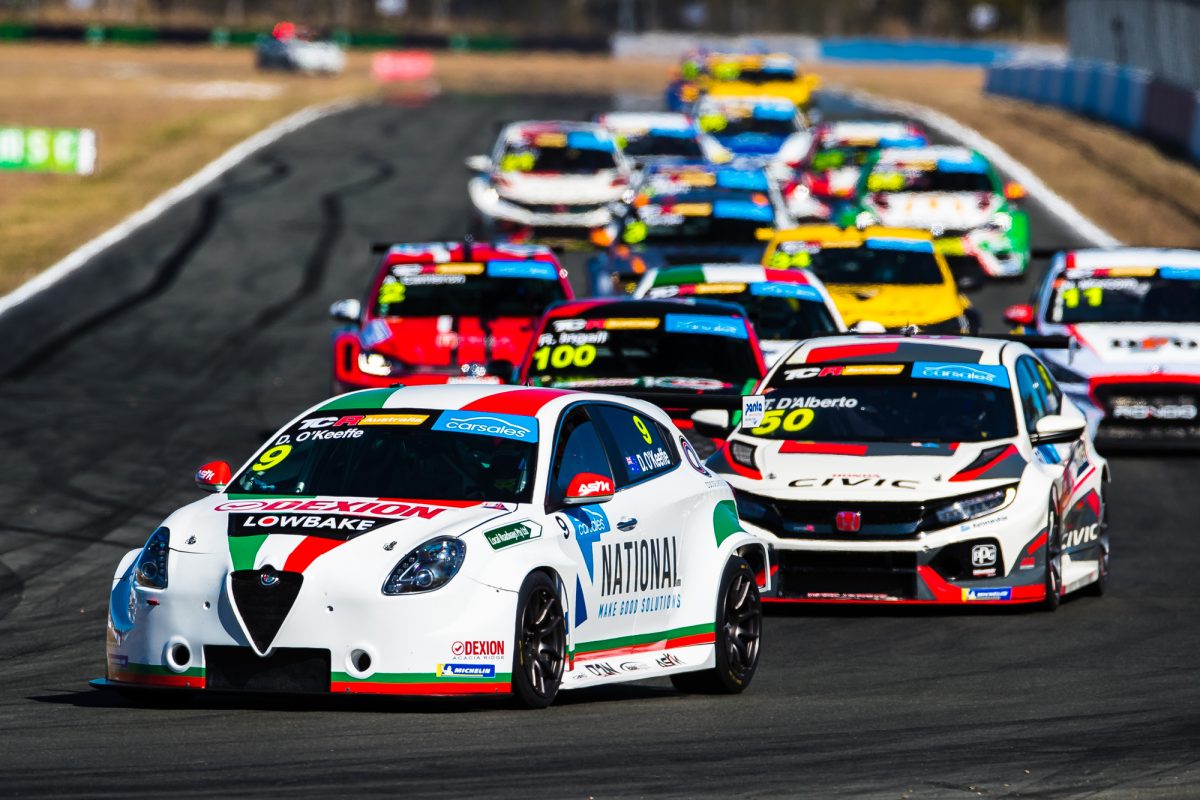 The Ash Seward Motorsport racer drove perfectly to complete a lights-to-flag victory from pole position, claiming a third win of the season in his Alfa Romeo.

O’Keeffe, currently sitting second in the series standings, had an advantage of around three-seconds before cruising home to the chequered flag.

Aaron Cameron (Melbourne Performance Centre, Volkswagen) produced a strong drive to round out the podium.

Pole-sitter O’Keeffe led the field into Turn 1 as Tony D’Alberto (Wall Racing, Honda) managed to jump Ingall to take second on the opening lap, with the latter slotting into third ahead of Jordan Cox (Garry Rogers Motorsport, Alfa Romeo).

Further back, there was contact between James Moffat (Garry Rogers Motorsport, Renault) and Alex Rullo (Kelly Racing, Opel Astra) on the start/finish straight, but both managed to keep their cars straight and rejoin the track.

Series leader Will Brown (HMO Customer Racing, Hyundai) made a fast start as he climbed five positions from 15th to 10th in the early laps.

Meanwhile, Leanne Tander (Melbourne Performance Centre, Audi) enjoyed a strong start, highlighted by an impressive move around the outside of Moffat to take seventh spot, having started from 11th on the grid.

At the front, O’Keeffe quickly asserted his authority on the race to open a comfortable lead over D’Alberto, who soon found himself under attack from Ingall.

Although, the man on the charge was Cameron as the Volkswagen Golf driver managed to catch and barge his way past Cox for third at Turn 6 on Lap 6.

Cameron continued to push which allowed him to join the D’Alberto, Ingall battle for second.

The battle ensued for several laps before Ingall struck with a well-judged overtaking move that began at Turn 6 and was completed at Turn 1 on lap 13.

Ingall began to move away from D’Alberto who then came under pressure from Cameron.

The former karting star dived underneath the Honda at Turn 4 to assume third position a lap later.

However, there was no stopping O’Keeffe at the front as he led home Ingall and Cameron.

After suffering an engine issue that ruled him out of Saturday’s race, Chris Pither was hit with a turbo issue on his Renault Megane that saw him suffer a loss of power.

The New Zealander was able to bring the car home in 16th position.

Alexandra Whitley (Alliance Autosport, Volkswagen) was the only retirement.

TCR Australia Race 3 is scheduled to begin at 1420 AEST.