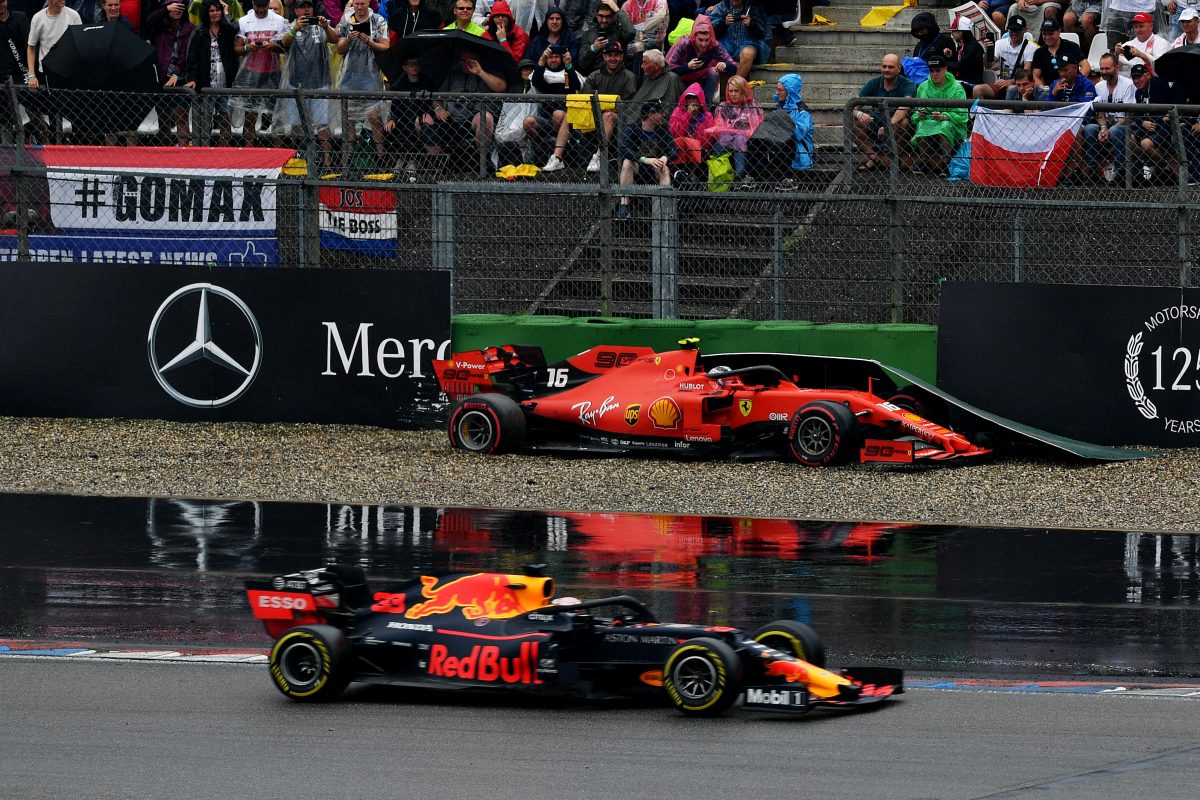 Max Verstappen won a chaotic German Grand Prix from Sebastian Vettel and Daniil Kvyat in a race that was dominated by changeable conditions.

Verstappen managed to keep it on the island as many around him fell victim to the conditions, including Valtteri Bottas, Charles Leclerc, and Nico Hulkenberg all crashing out.

Lewis Hamilton even left the road and was lucky to escape, though ended the affair out of the points despite having led the early stages.

An inspired strategy call from Toro Rosso saw Kvyat on the right tyre when it mattered to climb to second, only dropping to third in the closing laps as Vettel steamed through.

The German’s drive saw him climbed from last on the grid after a turbo problem in qualifying saw him fail to record a time.

Even Verstappen had a spin after he switched to slick tyres midway through the race, but was able to recover when so many others failed.

The Safety Car led the pack away for the formation lap as the field, and the Safety Car driver, assessed conditions for the potential of a standing start.

It remained on track for three laps, the race in limbo until it was deemed conditions were good enough to go racing, that running coming off the total race distance.

From the standing start it was Hamilton who got the best start as both Red Bulls plummeted through the field as they attempted to get off the line.

Bottas slotted into second ahead of Kimi Raikkonen third, Verstappen recovering to fourth by the end of the opening lap.

There were significant moves throughout the field in the early stages, Vettel climbing to 14th on the opening lap while Gasly fell to eighth.

Sergio Perez backed his Racing Point into the wall on the second lap as he exited Turn 11, the Safety Car deployed to recover the car which suffered damage to the rear end.

It triggered plenty of action in pit lane, with Vettel swapping his full wets for a set of intermediates.

Having passed the pit entry before the Safety Car was deployed, Hamilton and Bottas completed a lap at reduced speed before taking to the lane.

A close call for Romain Grosjean saw the Frenchman jump on the brakes as Leclerc exited the Ferrari box, stewards subsequently reviewed the incident and dolled out a fine to the team, leaving Leclerc to carry on without punishment.

On track, Kevin Magnussen elected not to stop, the Haas driver climbing to second behind Hamilton, with Lance Stroll further back taking the same strategy.

Magnussen was easy prey for Bottas once the race was resumed, losing another spot to Verstappen a corner later.

The biggest loser in the opening laps was Gasly, who’d started fourth but ran 18th after five tours, one spot behind Ricciardo.

Conditions improved to create a visibly dry line around the circuit after little more than 10 racing laps.

After 15 laps Ricciardo’s race came to a spectacular end as his Renault expired in a cloud of smoke.

With the Australian’s car parked in the run off at Turn 8, a Virtual Safety Car was deployed.

A perfectly timed stop for Leclerc saw him dive into the lane, rejoining the track as the VSC ended.

Having latched onto the back of Bottas, Verstappen lost the back end as he turned into the hairpin at the end of the back straight.

The Mercedes driver had left the door open, but Verstappen’s mild tank slapper snuffed out his charge on that occasion.

Leclerc’s fresh tyres paid immediate dividends, lapping more than three seconds faster than Hamilton on the first lap after the VSC was withdrawn.

Sainz left the road at the final corner, running wide on the exit of the penultimate turn and skating off onto the drag strip and lucky not to bury the McLaren in the gravel.

As Leclerc rounded the penultimate corner to complete the 28th lap, he buried his Ferrari in the gravel.

He’d already made the switch to dry weather tyres, and looked set to challenge Hamilton at the very front of the motor race after stellar stint on his second set of intermediate tyres.

With the yellows still out, and on dry tyres, Hamilton left the road where Leclerc had skated off, losing his front wing in the process.

It triggered chaotic activity in the pits, struggling to get a new nose on the car before a comedy of errors saw mechanics running back and forth chasing the correct set of tyres.

Hamilton finally emerged on a set of intermediate tyres in fifth, behind Alex Albon, as Bottas inherited the lead with Verstappen second and Nico Hulkenberg third.

However, Bottas was on slick medium tyres, and was forced into the lane on the next lap, handing Verstappen the lead as the Mercedes fell to third.

Shortly after the race restarted Hamilton was handed a five-second time penalty for entering the pits to the left of the bollard which delineates pit entry.

The Mercedes driver had been off the road almost opposite the pit entry, cutting across the track to drag his damaged car into the lane and picking up a penalty in the process.

Tucked up behind Albon, Hamilton hemorrhaged time, falling more than 10 seconds adrift of Verstappen out front before finally making a move stick at the hairpin on Lap 36.

A lap later, Bottas demoted Hulkenberg to third with Hamilton immediately latching onto the gearbox of the German, replicating Bottas’ move on the following lap.

The Renault driver’s race wouldn’t go much further as he became the latest member of the final corner club, skating into the barrier having run wide at the penultimate corner on Lap 40.

It prompted another Safety Car, Verstappen diving into the pits for a fresh set of intermediate tyres, the Dutchman emerging still in control of proceedings.

When the race resumed Hamilton found himself under attack from Albon and Carlos Sainz, the Englishman holding on to the spot despite a set of heavily worn tyres.

A lap later much of the field headed to the lane and switched to a set of slick tyres, while Hamilton remained on track to take over the race lead once again.

The remainder of the pack stopped next time around, leaving Stroll to lead after the Racing Point driver elected to stop earlier than almost everyone else.

Hamilton’s stop meant he served the extra five second time penalty he’d picked up earlier, dropping him to 12th in the running.

Predictably, Verstappen made short work of Stroll to retake the lead, while Kvyat proved rapid on the red-walled Pirelli tyres in third.

The Russian soon moved to second, easing through on Stroll courtesy of DRS on the run towards the hairpin.

Another off for Hamilton saw the world championship leader bouncing through the gravel after a spin at Turn 1, somehow avoiding the wall to carry on in 13th.

He then fell to last when he stopped for a set of tyres without heavy flat spots at the end of the lap.

Mercedes’ day of woe continued when Bottas replicated Hamilton’s Turn 1 spin, the Finn finding the wall to end his race and call yet another Safety Car.

Peeling off with five laps to run, the Safety Car released the field shortly before Gasly’s race ended after contact with Albon with damage to the front left tyre and front wing.

In the sprint to the flag, Verstappen was not challenged, while Vettel moved forward through Sainz, Stroll, and Kvyat to steal second place.

Toro Rosso recorded the second podium in the team’s history courtesy of Kvyat, while Hamilton struggled his way back to a pointless 11th place finish.