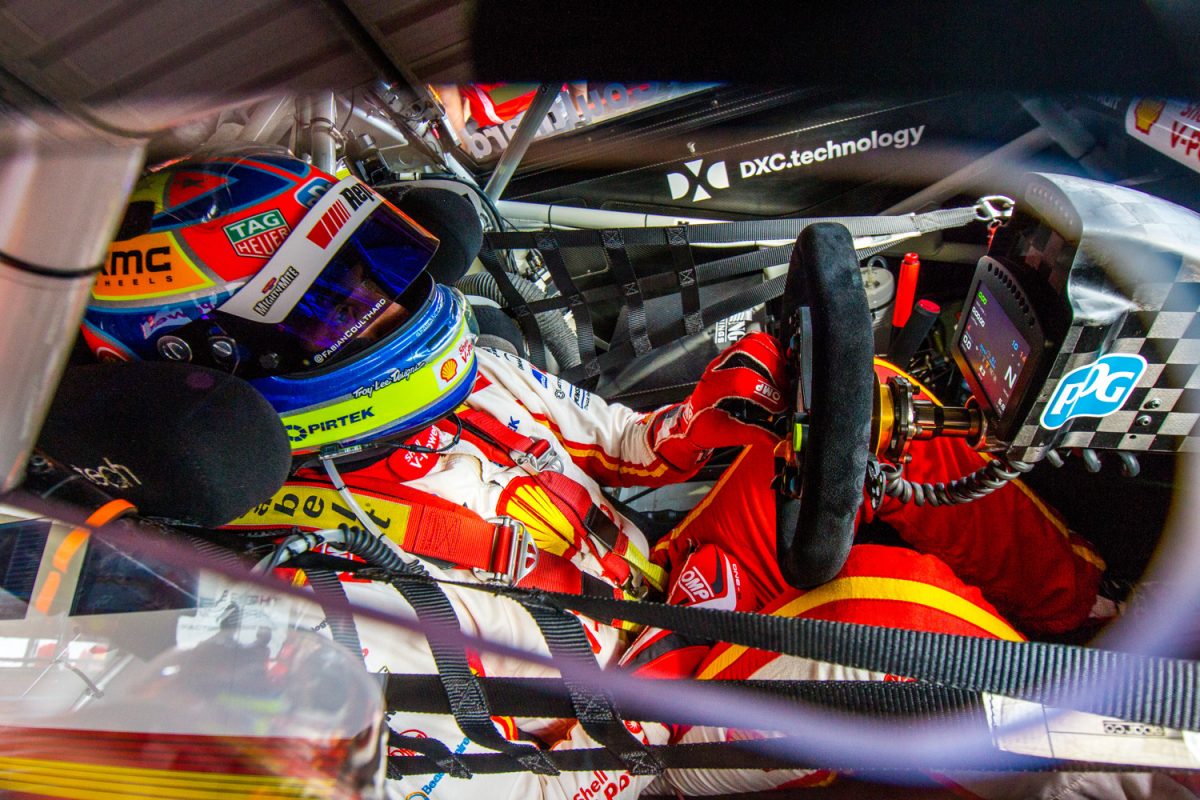 Fabian Coulthard labelled his Ipswich SuperSprint ‘a shocker’ after a catalogue of issues beset the #12 side of the Shell V-Power Racing garage.

The New Zealander struggled for pace throughout the weekend with his team constant chasing the set-up to bring the Ford Mustang back into the best operating window.

Coulthard also battled brake knock off, which affected many in the field, highlighted in Saturday’s race when he ran deep and through gravel trap at Turn 3 on lap 17 while battling for sixth spot.

After dropping down to as a low as 13th after the pit stops, he battled back to 10th spot at the finish.

Unfortunately it didn’t get any better for Coulthard, who turned 37 on Sunday, qualifying 11th after being forced to go through Armor All Qualifying part 1.

During that session he lost his number one mechanic Angus Connell to a hand injury that required a visit to a nearby hospital, ruling him out for the race.

Coulthard’s hope of a strong finish in Race 20 were dashed early after a clash with Penrite Racing’s Anton De Pasquale.

The pair were side by side on the run to Turn 4 when Coulthard suffered a small lock up and when De Pasquale attempted to turn in, #12 went across the nose of #99, taking both into the dirt and turning the Mustang around.

“Yeah pretty much (it’s been one thing after another). It’s been a shocker,” Coulthard, who recovered to 18th position, told Speedcafe.com.

“We were always off (the pace). At no point were we fast enough.

“Obviously we feel for Angus and what’s happened.

“Hopefully he’ll be back sooner rather than later; he’s my number one, he’s my guy and we need him. I’m not sure what we’ll do crew wise, but it just adds to the bad weekend we’ve had.”

When asked if there were any positives to take he replied, “Ah, it’s my birthday. Getting a year older, had some cake. That’s about it.”

Reflecting on the clash with De Pasquale, which was declared a racing incident by stewards, Coulthard added: “It’s been ruled on.

“Craig’s (Baird, driving standards advisor) got his view, I’ve got my view.

“Can you turn into a corner when a car’s there? I think not.

“I firmly believe that we could have gone side-by-side and he would have come off second best being on the outside. What can I do? They’ve got their view, I’ve got my view, we obviously don’t agree and I can’t do anything about it.”

De Pasquale described the tangle as unfortunate when interviewed by television crews post-race.

“I went on in down at Turn 3 and we came outside and I then faked to the outside and came next to him, but then he just went straight on,” said De Pasquale.

“I’ll let people upstairs make calls on that but it is unfortunate because we have both gone off the road.”

Coulthard’s shocker of a weekend sees him still occupy second championship albeit 433 points behind team-mate and Race 20 winner Scott McLaughlin, and only 87 ahead of Shane van Gisbergen in third.