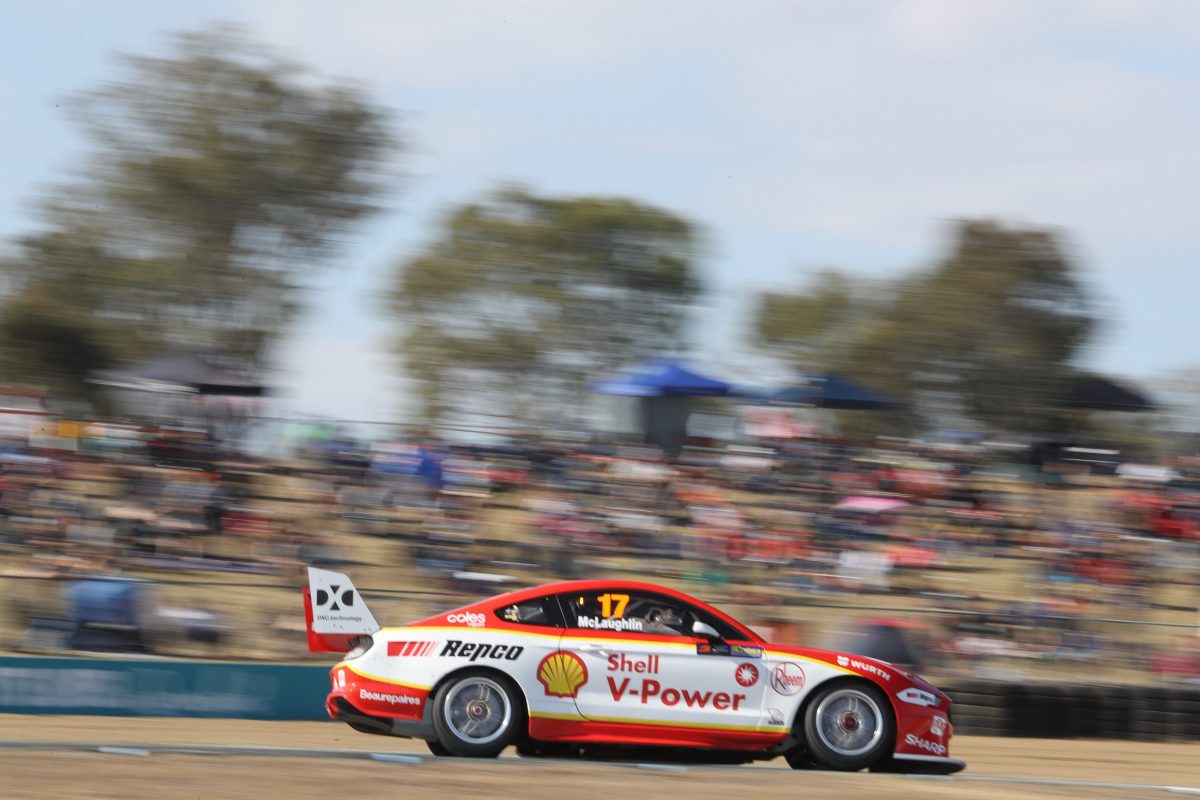 Scott McLaughlin laid down an impressive 1:08.3s in Practice 4 at the Ipswich SuperSprint but team-mate Fabian Coulthard will have to go the long way through Armor All Qualifying.

McLaughlin broke his own Virgin Australia Supercars Championship practice record at Queensland Raceway while Coulthard in the other Shell V-Power Racing entry and Penrite Racing’s David Reynolds were the biggest names to miss the top 10 ahead of the following knockout qualifying session.

All four Tickford/23Red Mustangs and both Red Bull Holden Racing Team entries earned a bye to Part 2 of qualifying, with Chaz Mostert best of the rest at 0.2361s off the pace in the #55 Supercheap Auto Mustang.

“There’s a bit of me, driving wise, I had a big think overnight just where I could improve in driving and work the best there,” said the championship leader.

“The car, we needed to make it a bit more lively for me; I don’t mind it being sideways and whatever, I think it’s going to help us in the race and have a bit more turn.

“I don’t care if we’re speedway a bit, just be a little bit loose and get me turned and go, it helps and that’s certainly what we tried to do today.”

Mostert was prominent throughout and eventually ended up second, while Jamie Whincup was 0.0203s slower again in the #88 Red Bull HRT ZB Commodore.

Next was Whincup’s team-mate, Shane van Gisbergen, who was briefly top during the final runs with a 1:08.7449s in the #97 ZB Commodore, while Lee Holdsworth rounded out the top five in the #5 The Bottle-O Mustang.

Will Davison (#23 Milwaukee Mustang) found no improvement on his final run but the 1:08.8261s which had him on top with three minutes remaining stood up for sixth position in the end.

Cameron Waters was the man to knock Coulthard out of the top 10 when the Tickford driver scraped in himself.

He consolidated his berth in Part 2 of qualifying, even though it was ultimately unnecessary, by improving to seventh with a 1:08.8350s with the chequered flag out in the #6 Monster Energy Mustang.

“Obviously we rolled out and the track was kind of probably the best condition it has been all weekend and my car felt heaps better than it did yesterday because the track temp was so different,” said Reynolds.

“And then I just think we got let into a false sense of security and led down the garden path.

“Now I’m in the remedial session, so I’ve got to start there.”

Armor All Qualifying for Race 20 at the Century Batteries Ipswich SuperSprint starts at 1120 local time/AEST.