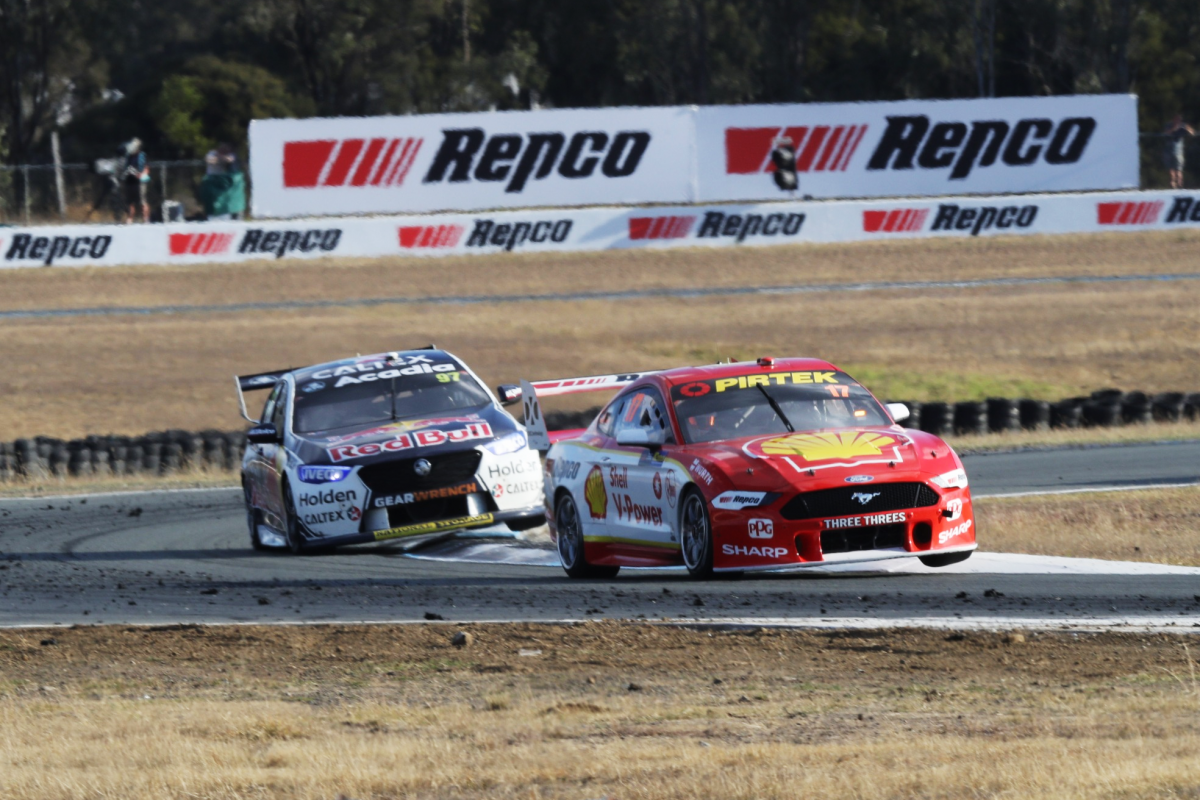 Scott McLaughlin has hung on to win Supercars Championship Race 20 at the Century Batteries Ipswich SuperSprint despite late pressure from a strong-finishing Shane van Gisbergen.

McLaughlin’s margin at the chequered flag was 0.7006s although van Gisbergen was inside that split that for the last five laps around Queensland Raceway.

However, he did not get close enough to the #17 Shell V-Power Mustang to try and fashion a pass, and McLaughlin took his 14th win of the season.

Chaz Mostert completed the podium in the #55 Supercheap Auto Mustang while Jamie Whincup was fourth in the second of the Red Bull Holden Racing Team entries, and Will Davison fifth in the #23 Milwaukee Mustang.

McLaughlin’s championship lead is now 433 points after team-mate Fabian Coulthard tangled with Anton De Pasquale on his way to 18th in the #12 DJR Team Penske Mustang.

Mostert had bested McLaughlin from the outside of the front row when the red light went out but could not clear the Armor All Pole Position man by the time they got to the first corner.

They ran side-by-side until McLaughlin made the position his through Turn 2, while Whincup (#88 ZB Commodore) filed into third after briefly ceding it to team-mate van Gisbergen (#97 ZB Commodore), and Davison took up fifth behind the two Triple Eight cars.

McLaughlin broke the lap record on Lap 2 with a 1:09.6229s and continued to gap Mostert, who had Whincup just about tailing him until the seven-time champion peeled into pit lane at the end of Lap 14.

The margin from first to second was around 3.3s when McLaughlin responded by pitting a lap later and rejoining about 3.4s ahead of Whincup.

Mostert took his first service on Lap 19 and van Gisbergen was reportedly meant to follow him into the lane, but instead pitted a lap later.

Davison stopped a lap later again and rejoined behind Cameron Waters before coming from a long way back to pass his Tickford stablemate at Turn 3 on Lap 23.

When Coulthard completed the cycle at the end of that lap, McLaughlin had almost four seconds on Whincup after they had each taken on around 43 litres of the required 120-litre total fill, van Gisbergen was another four seconds back (48 litres), Mostert (56 litres) was fourth having also briefly dropped behind Waters, and Davison (48 litres) was fifth.

McLaughlin moved his lead past five seconds on Lap 30, as van Gisbergen caught and passed Whincup on Lap 32.

Van Gisbergen brought McLaughlin’s advantage back under five seconds on Lap 37, before McLaughlin, Whincup, and Mostert pitted together at the end of Lap 38.

Mostert jumped Whincup in the pits but resumed around nine seconds behind McLaughlin, before van Gisbergen split them when he pitted a lap later and took up the chase from around five seconds behind the championship leader.

Davison pitted on Lap 40 before Mark Winterbottom brought an end to the cycle five laps later.

At that point, McLaughlin had a 2.7s lead over van Gisbergen, while Mostert, Whincup, and Davison rounded out the top five.

Van Gisbergen continued to reel in McLaughlin, bringing the gap under two seconds on Lap 54 and under a second on Lap 59, as Davison caught up to Whincup having been about 4.7s back after his second pit stop.

Only 0.4782s separated #17 and #97 at the start of the final lap but van Gisbergen was not ever close enough to look for a move.

“That was hard,” said McLaughlin, whose victory seals the manufacturers’ championship for Ford already.

“Shane just pushed me the whole way, he was obviously just coming and coming.

“Mine was pushing like a bus or a truck; it just had no turn in it. A bit to think about.

“Awesome battle, we always have good battles, me and Shane.

“Credit to Shane and his boys and Triple Eight, they’re coming back, as well as the Tickford guys.”

Van Gisbergen said: “My car was awesome today and (I) tried as hard as I could and, yeah, bloody cool.

“I knew we had a lot of adjustment in the roll bars, so I was more worried about how we qualified it, but quick tune-up and we were away.”

Mostert had a lonely run home while Whincup kept in front of Davison.

Waters made it three Tickford cars in the top six in the #6 Monster Energy Mustang, Andre Heimgartner (#7 Plus Fitness Altima) took seventh, Rick Kelly (#15 Castrol Altima) was eighth, and Nick Percat (#8 Hare & Forbes ZB Commodore) recovered from an apparent stall at the start to finish ninth after qualifying eighth and then dropping to the back of the 24-car.

Winterbottom rounded out the top 10 in the #18 Irwin Tools ZB Commodore and De Pasquale dropped two positions on the final lap to be home in 11th.

His team-mate David Reynolds had been running in the top 10 until late in the race, when he had to make a third pit stop to put in around another litre of fuel in order to make the 120-litre mandate.

Reynolds brought the #9 ZB Commodore to the chequered flag a lap down in 21st, three positions behind Coulthard.

The DJR Team Penske driver had qualified 11th and was occupying that position when De Pasquale challenged him at Turn 3 on Lap 9.

Coulthard tried to fire back down the inside at Turn 4 but locked up and when De Pasquale attempted to turn in, #12 went across the nose of #99, taking both into the dirt and turning the Mustang around.

Garry Jacobson was the sole non-finisher due to an engine problem for the #3 Rabble.Club Altima.

While McLaughlin is almost an event-and-a-half ahead of Coulthard in the championship, van Gisbergen has closed to 87 points off second place.

The next event of the Virgin Australia Supercars Championship is the OTR SuperSprint at The Bend Motorsport Park on August 23-25.