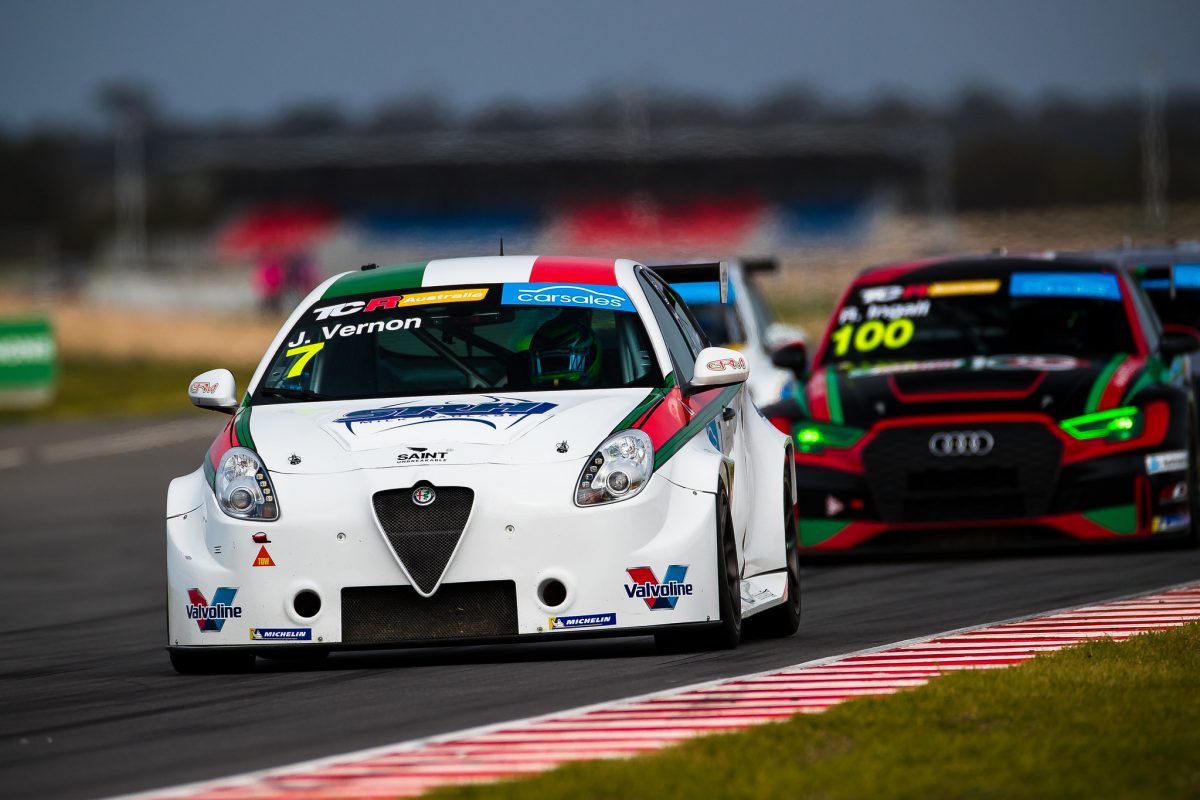 Vernon was set to contest the full TCR season in the #7 Alfa Romeo Giulietta Veloce but the team has elected to drop the driver for Round 4 after a difficult campaign headlined by incidents.

The latest saw the 2017 Toyota 86 Racing Series winner make an unforced error that resulted in collision with Alex Rullo which ruled him out of Races 2 and 3 at The Bend Motorsport Park.

GRM has recruited former Improved Production racer Cox as a stand in after the YouTube sensation starred for Wall Racing on debut in TCR Australia at The Bend earlier this month.

Cox, who drove Wall Racing’s third Honda Civic, turned heads having been in contention for podium results, scoring a best finish of fourth in Race 3.

The drive is a one-off at this stage with Vernon expected to return for Round 5 at Winton next month.

“We have been watching Jordan for several years and he is very impressive in a front wheel drive car,” said GRM director Barry Rogers.

“Like many he came to our attention following the onboard vision across the top of Mount Panorama and a couple of years ago we watched him in his Honda Civic at the Adelaide 500 where again he showed immense ability in a front wheel drive car.

“We obviously have several cars on the horizon for 2020 and there will be drives available, so it’s a good opportunity to assess possible candidates.

“For us, a driver’s ability is very important, but even more so is how they integrate with the team and their work ethic and attitude.

“Jimmy (Vernon) is a young up and coming talent and we identified him during the 2017 Toyota 86 Championship, which he went on to win.

“Jimmy is a young man with plenty on his plate including the responsibilities of running the family’s sign writing business.

“After getting involved in a few incidents, we felt it best to give him a round on the sidelines to take breath and really think about how he goes about his racing and how much he really wants to do it.

“We expect that the break will do Jimmy the world of good and he’ll be back behind the wheel at Winton for Round 5.”

Meanwhile, Cox is looking forward to another opportunity to shine in the series.

“It’s an outstanding opportunity. It’s the biggest chance I’ve ever had in motorsport and one that I’ve very grateful for,” said Cox.

“It’s a bit of mixed feelings. We were making progress with Wall Racing, they are great guys, but Garry put an awesome deal on the table and its one that I have to take.

“I really can’t thank (Wall Racing boss) David’s (Wall’s) efforts enough for getting me on the grid at The Bend, but for my future, the chance to race with GRM in the Alfa was too good to refuse.

“It’s a different team and different car, but I’d like to pick up where I left The Bend. I want to work toward getting the car suited to myself as quickly as possible.

“One thing I learnt from The Bend is that you aren’t going to walk in and towel everyone up … you need to work at it to be successful. I’m really looking forward to the opportunity.”

TCR Australia Round 4 will be held over three races from August 2-4, with the event broadcast live on SBS and via the Shannons Nationals live stream carried by Speedcafe.com.