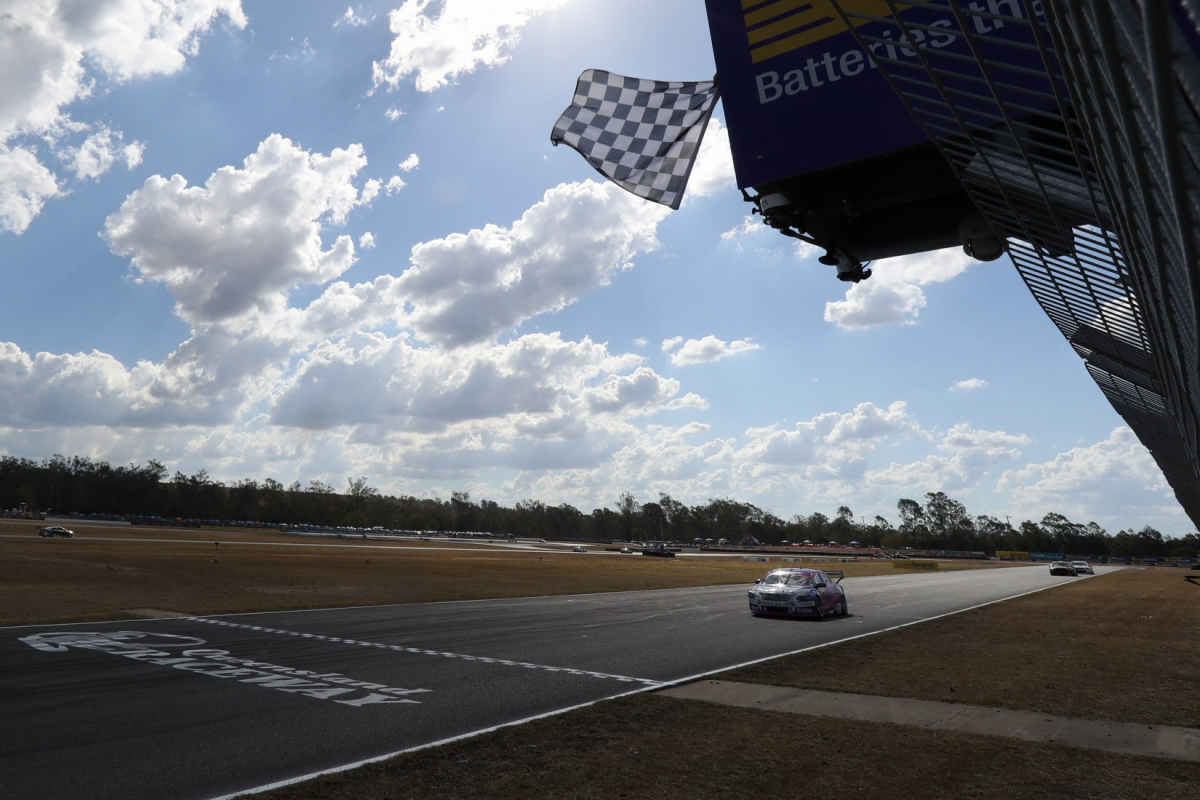 Bryce Fullwood has consolidated his hold on the Dunlop Super2 Series by passing Thomas Randle to win Race 2 of Round 4 at Queensland Raceway.

Randle led until he ran wide with an airbox fire on the third-last lap and Fullwood drove his #16 MW Motorsport Altima through the gap which the previous day’s race winner had left.

In the end, Randle had to just hold off Kurt Kostecki in the battle for the minor placings, as Fullwood won by 1.6608s.

Kurt Kostecki made a poor getaway from Armor All Pole Position but Randle walked his car away well from the outside of the front row, and thus it was the #5 Tickford FGX Falcon leading Fullwood, Kurt Kostecki (#55 Triple Eight VF Commodore), Adam Marjoram, and Jack Perkins (#54 Eggleston Motorsport VF Commodore) through the opening corners.

Dylan O’Keeffe prevailed in a Lap 1 dice with Zane Goddard over sixth position, and the front-runners began to settle into a rhythm.

The top three remained tight as they gapped the rest of the 17-car field, and Randle’s lead only crept over half a second on the fifth lap.

Fullwood continued to circulate a few tenths back from the leader, who began to struggle with a cramp in his right foot.

While that cleared towards the end of the race, Randle ran wide at Turn 3 on Lap 18 with an airbox fire and Fullwood was there to capitalise.

That settled matters at the very front of the field while Kurt Kostecki, whose deficit to the top two ebbed and flowed during the 20-lap encounter, got close to Randle but remained third.

Marjoram ran fourth for the duration, marking his best ever finish in Super2, although the West Australian had to work for the position at the end when O’Keeffe closed in on the #15 Image Racing VF Commodore.

The Garry Rogers Motorsport driver did not manage to make a pass but he too achieved a career high with fifth position in the #44 VF Commodore.

O’Keeffe had passed Perkins by braking very late into Turn 3 on Lap 10, with a small touch on the way through the corner, but Perkins had bigger problems two laps later when he had a collision with Goddard.

The MW Motorsport driver had dived down his inside at Turn 4 and when Perkins tried a switchback, he turned around the #28 Altima at Turn 5 and then nearly pulled the left-hand side doors off Car #54 when they hit again as Goddard spun.

Jake Kostecki (#56 Kostecki Brothers Racing VF Commodore) therefore inherited sixth and stayed there until the end of the race.

Goddard came home 13th, while a 15-second penalty for Perkins only dropped him from 14th to 15th, behind Ash Walsh.

Walsh generally struggled in the #35 Matt Stone Racing VF Commodore and was seen breaking into big slides on multiple occasions.

Will Brown was also having a bad day after what was found to actually be a prop shaft failure in qualifying (originally reported as a transaxle failure), and that got even worse when he ran off at Turn 1 having dropped a wheel into the dirt on approach to the corner on Lap 9.

Brown was running 12th at the time but fell to 15th before he received a mechanical black flag and the Eggleston Motorsport crew had to attend to the flailing left-front guard and side skirt on the #38 VF Commodore.

He ended up being the last finisher, a lap down in 16th, while Matt Chahda (#18 Matt Chahda Motorsport FGX Falcon) was the only DNF.

Fullwood’s series lead has ballooned to 283 points, almost a full round’s worth, with Goddard still second, Kurt Kostecki third, and Randle up to fourth.

Next up is Super2’s showpiece round, featuring the single 250km race on the Saturday of the Supercheap Auto Bathurst 1000 weekend, which takes place from October 10-13.