Randle breaks through in Race 1 of Super2 at QR

Randle breaks through in Race 1 of Super2 at QR 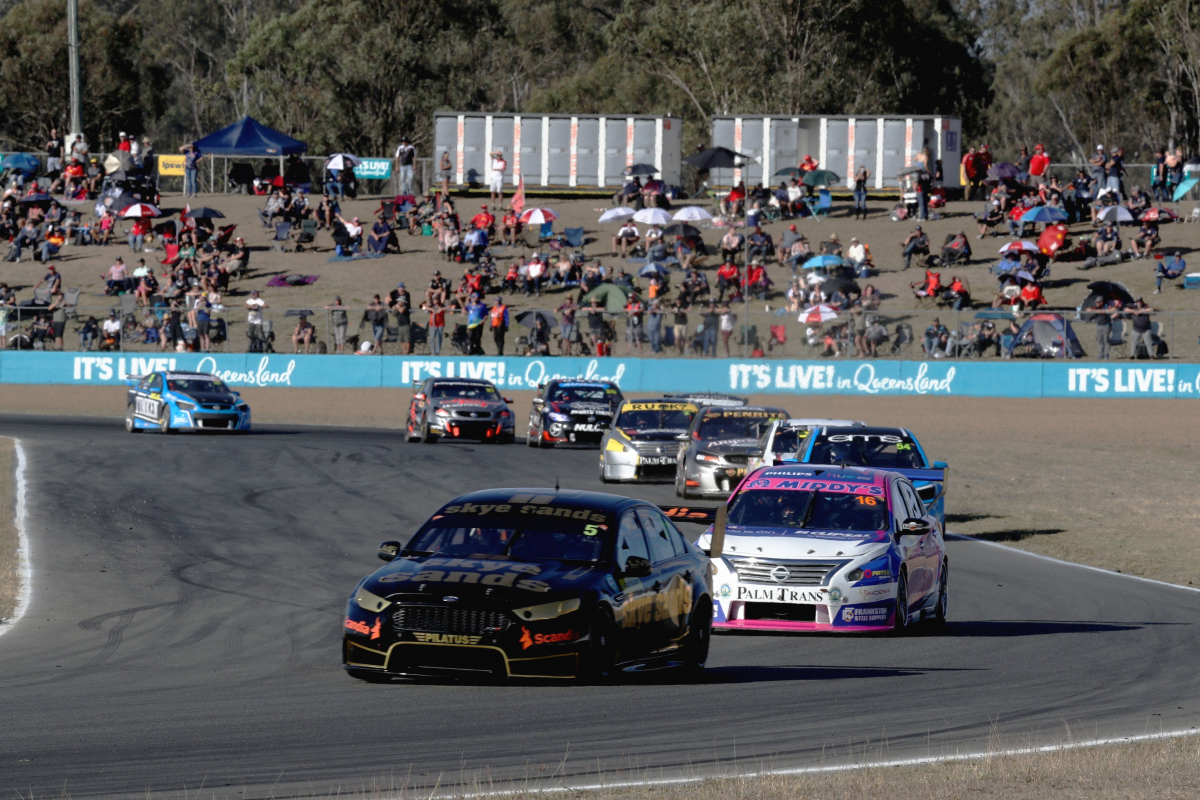 Thomas Randle is now a Dunlop Super2 Series race winner having led all the way in Race 1 of Round 4 at the Century Batteries Ipswich SuperSprint.

The Tickford Racing driver cleared away midway through the race and went on to win by 1.5234s, while Bryce Fullwood extended his series lead by finishing second, and Kurt Kostecki completed the podium.

There was confusion at what would have been the race start when an orange light flashed above the red before both extinguished.

Jack Perkins bolted from the second row as others around him moved off slowly, although there was no serious incident and the field came around to the grid again after an extra formation lap of Queensland Raceway.

At the start proper, Armor All Pole-sitter Randle (#5 FGX Falcon) led Fullwood (#16 MW Motorsport Altima), Perkins, and front row starter Kurt Kostecki (#55 Triple Eight VF Commodore), who broke into wheelspin when the lights went out, down to the first corner.

As the top two broke away, Kurt Kostecki made a big lunge down the inside of Perkins’ #54 Eggleston Motorsport VF Commodore at Turn 4 on Lap 2 and took up third position.

The gap between Fullwood and Kurt Kostecki closed up on Lap 4 when the Safety Car was called to retrieve the #49 Image Racing VF Commodore of Jordan Boys, which was stuck in the gravel trap at Turn 3.

Jake Kostecki had a pace advantage over Perkins and made the move for fourth position on Lap 8, the second lap after the restart.

Brown continued his rise from a poor qualifying position but was made to work for eighth position, dragging with Everingham down Dick Johnson Straight before finally making the move into Turn 1 on Lap 10, where they made contact on exit.

Randle turned up the wick at the halfway point of the race, which was shortened by one lap to 19 due to the extra formation lap, and enjoyed a lead of over a second with five laps remaining.

Kurt Kostecki was pressuring Fullwood for second but gave the last start race winner a reprieve when he locked up at Turn 3 on Lap 16, and that error effectively settled the battle for the podium.

For Randle, the result was redemption after two Safety Car restart infringements cost him a breakthrough victory three weeks ago in Townsville.

Perkins likely would have been classified there anyway given that Goddard had been issued a five-second penalty for the contact with his team-mate.

For Goddard, however, getting bottled up behind Car #54 cost him a chance to gap those behind and he was officially 11th with the time added.

Brown therefore ended up sixth having put another good move on Walsh at Turn 1 on Lap 16.

Everingham also capitalised on that pass when he went deep under brakes at Turn 3, and he managed to hold on to what would become seventh position despite a huge lock-up as he executed the manoeuvre.

Boys went on to finish two laps down in 16th, the last of the finishers, with Brenton Grove (#10 Triple Eight VF Commodore) failing to make the end due to damage from contact with Mason Barbera (#99 Garry Rogers Motorsport VF Commodore) at Turn 4 on the restart lap, an incident which went unpenalised.

Fullwood’s series lead is now 199 points while Goddard retains second in the standings despite finishing outside the top 10.

There will be another Armor All Qualifying session tomorrow at 1050 local time/AEST, which sets the grid for Race 2 of the weekend from 1250.