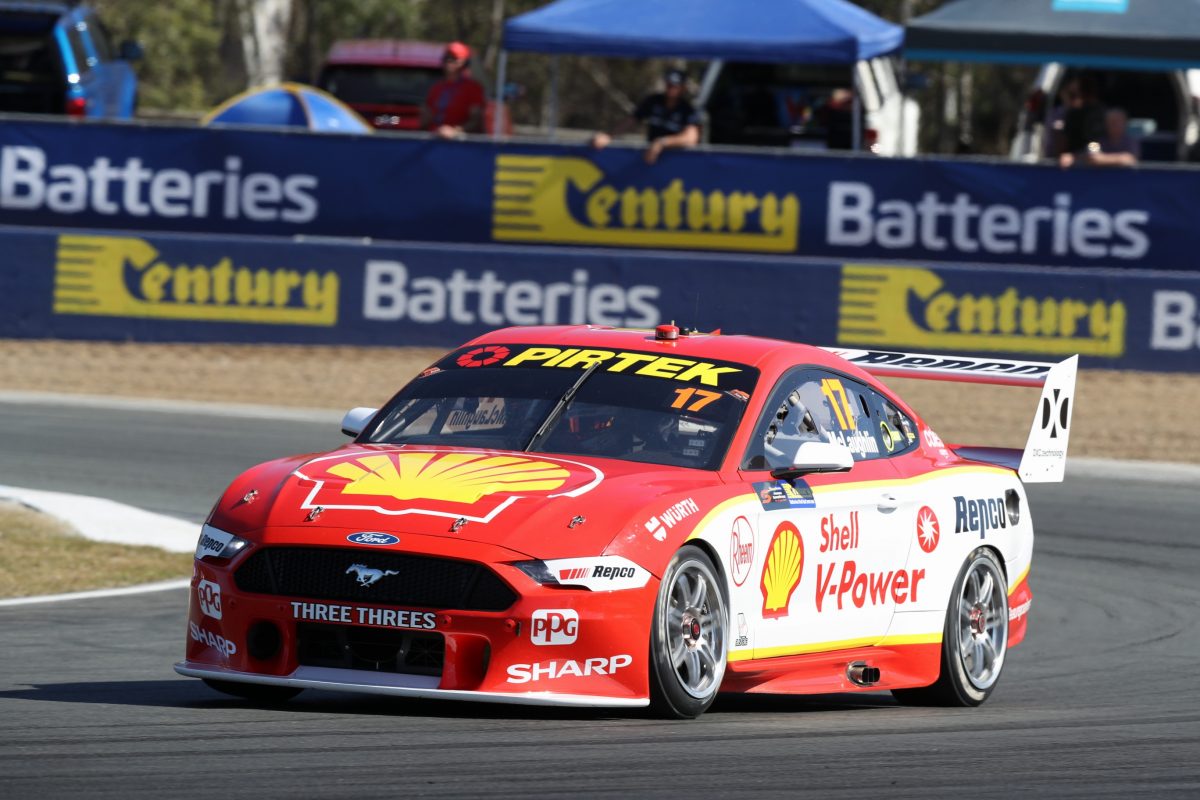 McLaughlin laid down a best of 1:09.1926s in the last practice session before Armor All Qualifying for this afternoon’s first race of the Century Batteries Ipswich SuperSprint.

The Shell V-Power Racing driver ended up 0.0590s quicker than Penrite Racing’s David Reynolds, while Will Davison backed up his Friday pace by finishing third in the #23 Milwaukee Mustang.

McLaughlin had a slow start to the half-hour session with he and team-mate Fabian Coulthard the last to set their first representative lap times.

The championship leader also had an off at Turn 6 on an old tyre set and was 13th at the halfway mark, before going top with a 1:09.3626s.

He was shuffled back a couple of positions as the final runs rolled out before taking the #17 Mustang back to first position with the chequered flag out.

McLaughlin’s best usurped Reynolds, who logged a 1:09.2516s and then pitted the #9 ZB Commodore with a minute remaining.

Reynolds said post-session: “I’m not really a hundred percent happy with it.

“Even though we were second it didn’t feel that competitive. We’ll have to wait ‘til qualifying to find out where we really sit.

“Hopefully we can make the best of both worlds with the car we had on Friday and the changes and go forward.”

Davison was the initial pace-setter and returned to the pointy end with a 1:09.3173s on his final run, while Chaz Mostert improved slightly at the end to place the #55 Supercheap Auto Mustang, which had an overnight engine change, in fourth position.

“Still a bit of a question mark there,” said Mostert of his pace.

“I think our biggest problem is just car feeling at the moment, but (we’re) throwing a lot of things at the car but still with the same issues.

“Look, it’s good to be fourth, up in that top five with problems; I’m sure it’s probably a bit track-related and everyone is chasing the same thing.

“Still a couple of cars in front of us doing a better job than us; we’ll just keeping trying to chase them.”

Cameron Waters (#6 Monster Energy Mustang) made for three consecutive Tickford-run Fords while Todd Hazelwood was again the best of those in a Triple Eight ZB Commodore with a 1:09.5669s in the #35 Matt Stone Racing entry.

Coulthard was 16th in the #12 DJR Team Penske Mustang, one position ahead of the lead Nissan of Andre Heimgartner (#7 Plus Fitness Altima).

Coulthard was also one multiple drivers to see a bad sportsmanship flag for overuse of track limits on the extended exit kerb at Turn 2, after a general warning to all cars earlier in the session.

Armor All Qualifying for Race 19 of the Virgin Australia Supercars Championship starts at 1325 local time/AEST.