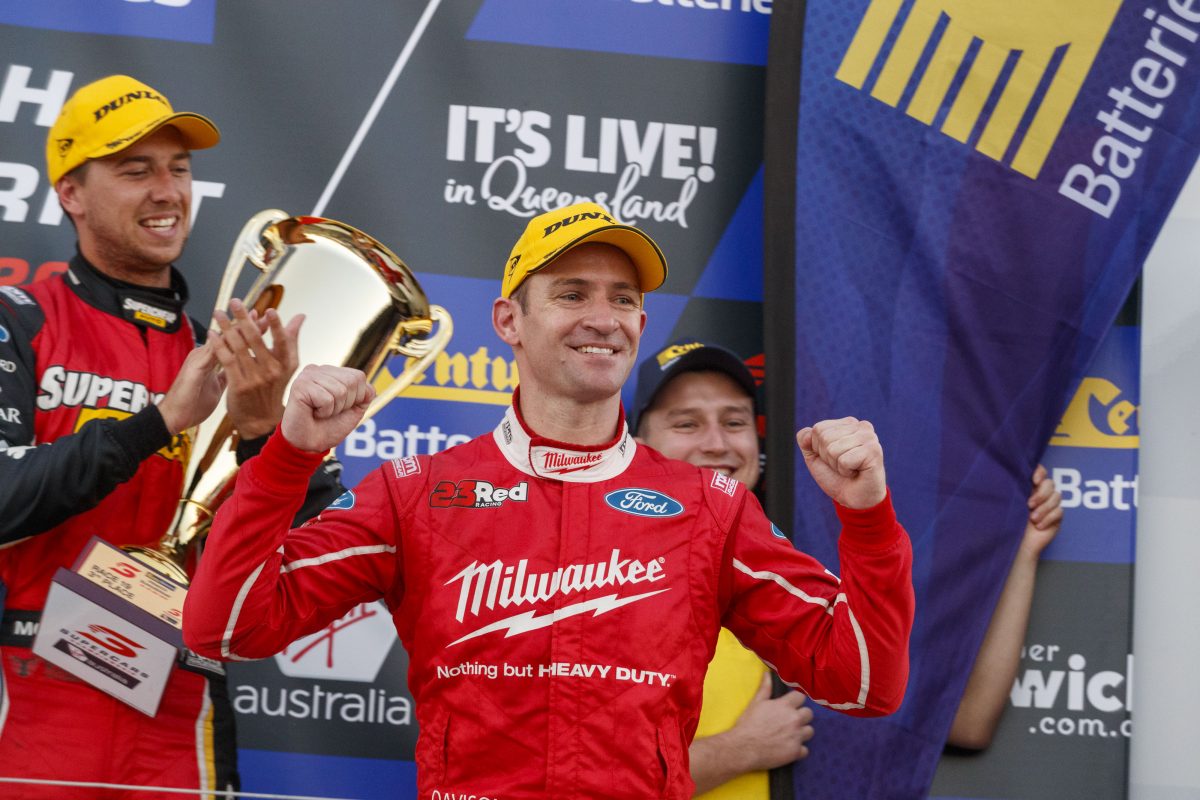 Will Davison celebrates a maiden podium at Ipswich

An ecstatic Milwaukee Racing boss Phil Munday is planning a special brewery celebration for his team after recording a breakthrough Supercars podium at the Ipswich SuperSprint.

Will Davison delivered the team’s first podium courtesy of an impressive drive to second behind Triple Eight’s Jamie Whincup in Race 19 at Queensland Raceway.

The team, which runs as a customer at Tickford Racing, has long been striving for a podium having burst onto the scene last year, emerging from the remains of Lucas Dumbrell Motorsport.

Ironically Munday was absent for his team’s success, having elected to stay in Melbourne to look after his wife, who had recently broken her arm.

However, he plans to make up for it by taking the team to one of the breweries he co-owns in Melbourne to celebrate next week.

Last year The Public Brewery in Croydon crafted a special 23Red ale to mark the team’s strong start to the 2018 campaign.

“We’ll have a night at the brewery for all the boys, definitely, but we’ve got a ride day Monday and Tuesday so it’ll have to be next week or the week after,” Munday told Speedcafe.com.

“It’s a bit of a shame that I wasn’t there but I had most of my children with us at home and the grandchildren and my great grandson, so it was pretty special too, to have them all there and my wife Carol.

“(I’m) just ecstatic, basically, that we finally achieved the goal that we set out for and that was a podium. They’re very hard to get but how good was that?

“I mean, Will’s done a great job all weekend, the boys have done an awesome job to prep the car out of the box.”

Reflecting on the enormity of achievement, Munday said it was a just reward having witnessed his team come from the back of the Supercars grid to the front inside two years.

The team started its Supercars life operating on its own out of a workshop in Kilsyth before teaming up with Ford powerhouse Tickford this year.

“We’ve come from the back of the grid to almost the front and look, (it is) a credit to the guys, a credit to Will,” he added.

“But as you know, in all of this it takes a lot of money and, I guess, a lot of consistency not to give up on it. It’s so hard to do, but what a reward to get our first podium.”

For Davison, the result was a first visit to the podium since winning the 2016 Supercheap Auto Bathurst 1000.

The 36-year-old has shown strong pace throughout the Ipswich SuperSprint weekend, recording top three results in each session.

While keen to celebrate next week, he admitted it was devastating to achieve the podium without Munday, who had offered him a lifeline 23Red drive at the end of 2017.

“We hadn’t been out of the top three in any session, qualifying and the race today,” said Davison.

“I’m devastated he’s (Phil) not here to be honest, but he was there in spirit. (He) had all the family there, he’s got a massive family, they were all watching.

“He’s a great addition to pit lane, he’s a cool guy to work for.

“He’s invested a lot and we did our own thing last year and made a massive move to change it all up in a short period of time to give me an opportunity to get results, and I’m just really appreciative.”

Davison will be aiming to build on the podium when the Ipswich SuperSprint continues tomorrow.