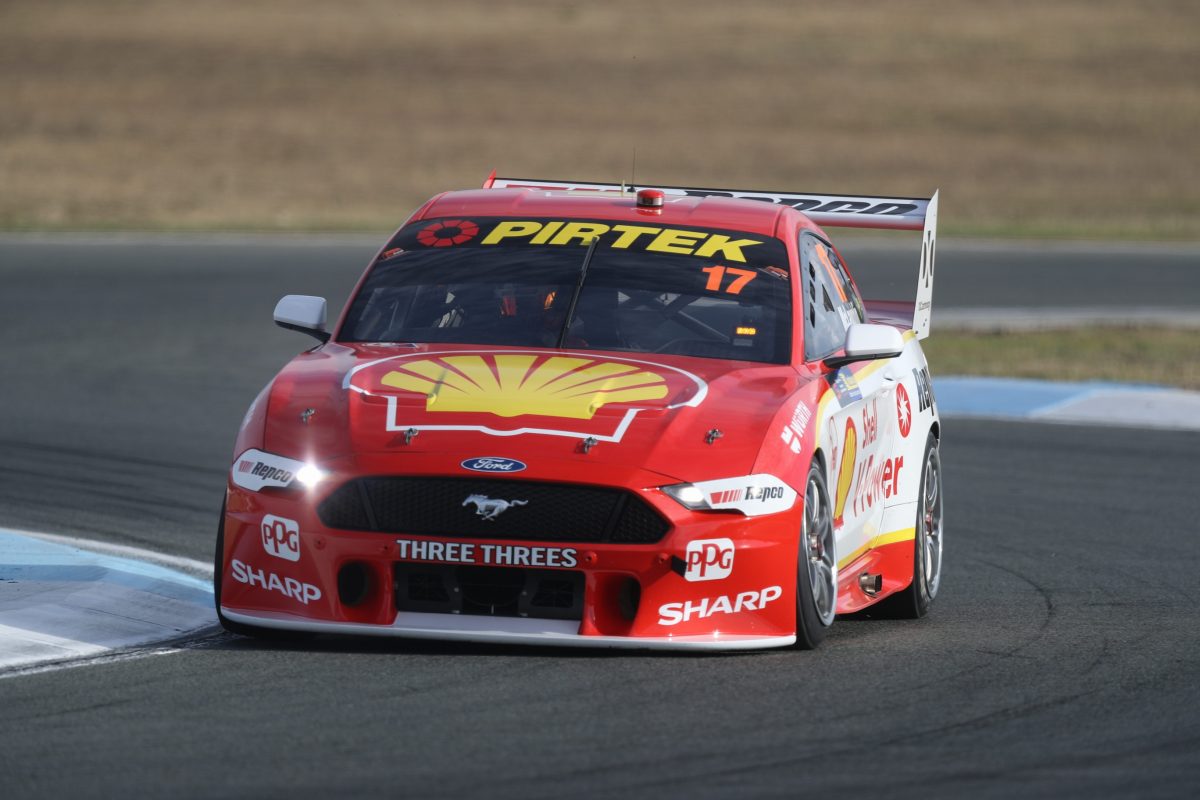 Scott McLaughlin and Will Davison have finished first and second respectively for the second Supercars Championship practice session in a row at the Century Batteries Ipswich SuperSprint.

McLaughlin found almost four tenths of a second relative to the benchmark which he set in Practice 1 earlier in the day by taking his #17 Shell V-Power Mustang to a 1:08.8277s on new tyres.

Davison was the only other man in the 1:08s bracket in the half-hour hit-out at 0.1145s off the pace in the #23 Milwaukee Mustang.

Both DJR Team Penske entries, both Triple Eight Racing Engineering entries, both Erebus Motorsport entries, and three of the four Tickford/23Red entries made the top 10 which sets the starting order for knockout Armor All Qualifying for Race 19 tomorrow at Queensland Raceway.

McLaughlin was the pace-setter for the majority of proceedings and even clocked a 1:08.9888s on practice tyres on his penultimate run.

Davison briefly bettered that, but he needed new tyres to do so, and was again ultimately just over a tenth of a second away from McLaughlin but better than everyone else.

McLaughlin and engineer/DJRTP technical guru Ludo Lacroix were nevertheless somewhat disappointed given that the Kiwi did not maximise his pace.

“He’s angry at me,” said McLaughlin of Lacroix.

“Sounds like I got to go to the office and have a big think about it.

“It’s overall feeling really nice. Obviously parc ferme tomorrow after quali, so you’ve got to think about that for the race.

“We’re working on having a fast car, but hopefully looking after those rear tyres, so we’ll see how we go.”

Chaz Mostert consolidated his place in the top 10 with a 1:09.0438s after the chequered flag which put the #55 Supercheap Auto Mustang third, while Matt Stone Racing’s Todd Hazelwood (#35 ZB Commodore) was best of those in Triple Eight-built cars in fourth.

Fabian Coulthard (#12 DJR Team Penske Mustang) and Jamie Whincup (#88 Triple Eight ZB Commodore) were vulnerable to having to go into Part 1 of Armor All Qualifying before they moved themselves up to seventh and eighth respectively.

David Reynolds (#9 ZB Commodore) was ninth in the second of the Erebus cars and Lee Holdsworth (#5 The Bottle-O Mustang) 10th.