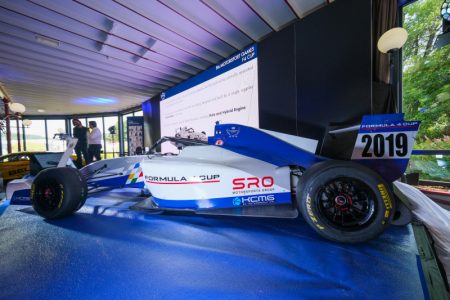 Formula 4 Cup will use an all-new hybrid car

The promoter of the FIA Motorsport Games has revealed further details of the event which will take place in Italy later this year.

The GT Cup competition is set to build on the 2018 GT Nations Cup, with two one hour races feeding into a 60-minute finale.

Driver pairings will again be restricted, with only all-Bronze or Bronze/Silver combinations allowed.

In the Touring Car Cup, a mixed format will see teams do battle in TCR machines in one 25-minute race and one 30-minute race, with points awarded across the two.

Formula 4 will use an all-new car for the competition, and is set to use hybrid technology.

While specifics of the weekend format were not revealed, all cars are set to be prepared by Hitech GP with identical set-ups and limited tyres, while data will be shared between all drivers and engineers.

The Digital Cup for sim racers will use the Playstation game Gran Turismo, while the drifting competition will use the Turns 10 to 14 section of the Vallelunga circuit.

For the Karting Slalom Cup, drivers must be aged between 14 and 16, with drivers running along parallel courses in a relay format.

Plans for Australia’s team into the Motorsport Games are already underway, with CAMS announcing earlier this month that work had already begun on selecting competitors for Australia’s entry.

The inaugural FIA Motorsport Games, promoted by SRO, will be held at the Vallelunga circuit from October 31-November 3.