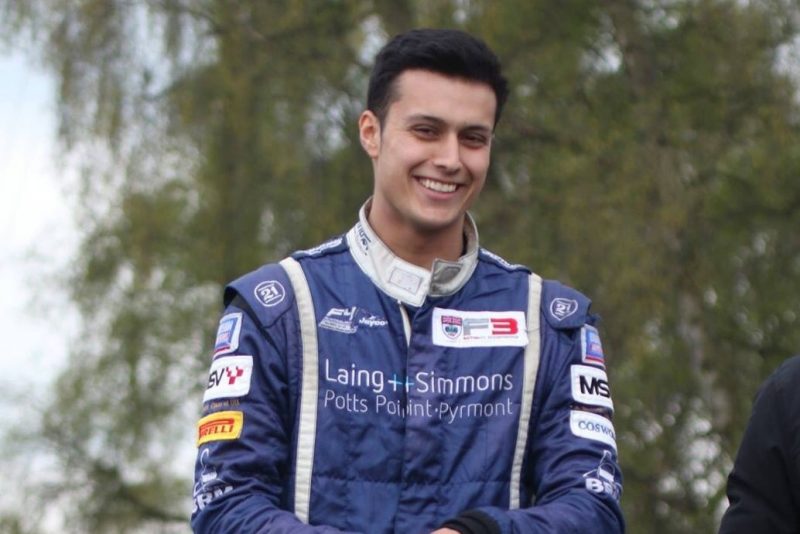 Harry Hayek is eyeing a career in GT racing after a torrid two years that have seen him largely relegated to the sidelines.

A heavy crash while racing in British Formula 3 saw Hayek break his back in 2017, before he made a one-off appearance in the Kumho Tyre Super3 Series last season.

However, having been diagnosed with a kidney disease, the outing proved too much and prevented him pursuing further opportunities.

Now in remission, Hayek is now looking to rekindle his fledgling career.

“When I jumped in for that Kumho round, although my back had healed, I was still on heavy medication,” Hayek told Speedcafe.com of his one-off Super3 outing last year.

“In my head I was ready, and I felt that I was ready, but physically body wasn’t able to cope. I was getting severe cramps, migraine headaches.

“From there I had another close to a year off and just recently, in the last few months, I’ve come into remission.

“They’re taking me off all the medication, so all the heavy drugs I’m off now, and that’s when we started looking to, I guess, make the comeback and start driving again.”

That began with an outing in Formula 4 at Phillip Island before he joined the Toyota 86 Racing Series at Townsville earlier this month.

Another three outings in the series are set to follow while Hayek continues to work away on future plans.

“As you can understand, the sport is very, very expensive,” the Sydneysider explained.

“A lot of time, money, and effort goes in to racing and when we were racing overseas we had sponsors and everything was going great.

“Then it took a bit of a twist and trying to come back, it is difficult but it’s what I love.

“Right now I’ve just been working in my family business, funding my racing. We’re in real estate, so all the sales I make, everything goes towards the racing.”

Initially looking at a career in Supercars, over the last 12 months Hayek has broadened his horizons and is entertaining the prospect of a potential return to competition in Europe.

“We started thinking ‘what exactly do I want out of the sport?’ And from the start, everything that I’ve said is I just want to become a professionally paid racing driver,” he reasoned.

“I’ve never really been set on a championship and, based off that, we’ve been looking at the Supercars as an option so I can stay in Australia and that’s what we can attack.

“But the more time we’ve spent reflecting on that question, to actually make it as a professionally paid driver in the Supercars, you can agree, it’s a very small window and the steps that you take are very limited to what categories you run.

“So just recently we’ve started looking into venturing into the GT side of things, where we can race here or I guess that also leads overseas.

“Whether that be racing and becoming a factory driver or racing alongside a gentleman driver, I guess my goal is just to become a professionally paid driver.

“We’ve actually got a contact over in the UK that I met when I was over there racing, and there’s something GT related that’s popped up, that’s surfaced,” he added.

“Right now we’re just trying to negotiate a deal and then get over there to do some testing.

“That’s what we’re trying to get our hands on and then take that opportunity.

“But the 86 Series, I guess it’s a very good deal and you’re racing on some fantastic tracks, it’s close racing, and that’s probably exactly what I need coming back from a single seater background.”