Steven Johnson has no regrets over knocking back GRM

Steven Johnson has no regrets over knocking back GRM 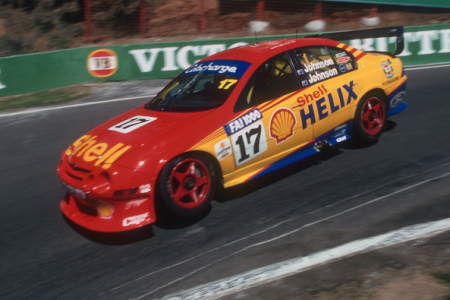 Steven Johnson drove with Dick in two Bathurst 1000s, including the latter’s farewell in 1999

Steven Johnson says that he has no regrets over turning down the seat at Garry Rogers Motorsport which Garth Tander ended up taking in order to drive with his father.

While Johnson would go on to become a full-time driver in the V8 Supercars Championship in 2000, taking over the seat vacated when Dick retired, he had in fact been offered the drive which launched Tander’s career.

Steven Richards’ early-season departure to Britain in 1998 to become a Nissan test driver for the British Touring Car Championship meant that a drive in one of GRM’s two Commodores had become available.

Speaking on the V8 Sleuth Podcast, Johnson revealed that he was offered the drive but knocked it back in deference to the opportunity to share a car with his father given that Dick’s career would soon be coming to a close.

“That was a black and white offer to go, and a multi-year deal for me to race there full-time in Garry’s Commodore,” he said.

“It was a really hard decision because, being such a close family too and knowing that Dad was going to come to the end of the career in the not too distant future, I decided to decline that drive.”

Despite the obvious appeal of driving together at Sandown and Bathurst, Dick actually tried to convince Steven to take up the offer.

“He actually told me I should take it,” recalled Johnson.

“I went against him, to drive with him later in the career.”

Johnson, who made his first Sandown 500 and Bathurst 1000 starts in 1994, did end up driving part-time in 1998 in the ‘Racing for Life’ Falcon run out of Dick Johnson Racing.

He got his moment driving with his dad in the enduros later that year, and again for Dick’s last Sandown and Bathurst in 1999, plus the 2000 Queensland 500 when Jason Bright was unavailable for the Bathurst lead-in due to his Indy Lights commitments.

While Tander went on to win the 2000 Bathurst 1000 and get picked up by the HSV Dealer Team when it was on the rise, winning the championship there in 2007, Johnson has no regrets.

His only disappointment was that Dick’s drive in the 1999 Bathurst 1000 was only to fourth when a podium was deserved in the circumstances.

“I would have, and I still to this day – sliding doors, we talk about it all the time and what would have happened if I did this or did that – I wouldn’t change anything for the world.

“I loved what I did, I’ve had a great time doing it, and that fourth in ’99 was hard because… it was hard but it wasn’t hard.

“It would have just been so good and fitting for him to stand on the podium for his last race there, but all in all, once we got the car back, and we knew how bad the brakes were, they literally had no brakes left, it was on the backing plate, we don’t know how he got it up to fourth so I still think that was one of his best drives of his career, just doing that.”