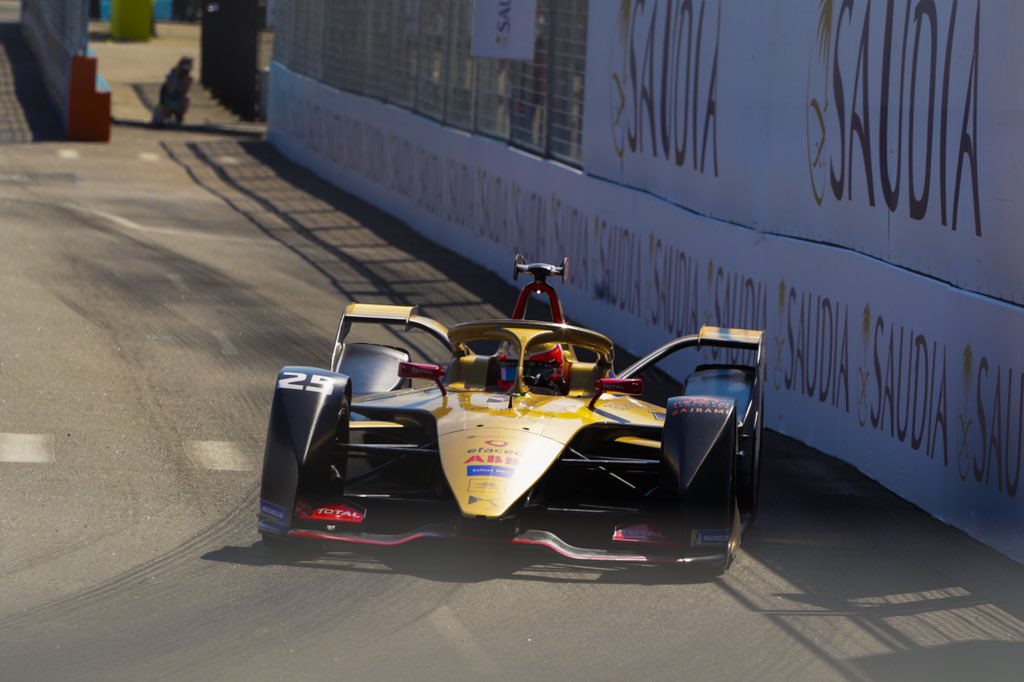 Jean-Eric Vergne has won the Formula E championship for a second time as Robin Frijns took out the season finale on the streets of Brooklyn.

Vergne was relatively reserved during the race as he became the first multiple champion in Formula E history with back-to-back titles by emerging in seventh position on the day.

His DS Techeetah outfit also claimed their maiden teams’ title after having their hopes scuppered last season during the double-header finale.

Saturday’s race winner, Sebastien Buemi, jumped Lucas di Grassi and Mitch Evans to second in the standings by finishing on the podium as those two collided on the final lap.

Alexander Sims was left to hold off the fast moving Buemi after starting from pole position, his first in the series.

Mirroring the circumstances of 24 hours earlier, a Geox Dragon was involved in a Lap 1 incident with Andre Lotterer spinning Jose Maria Lopez.

Dutchman Robin Frijns had a look at Buemi in a bid to re-take the second position that he lost on the start, but had to stay behind the Nissan e.Dams driver.

Meanwhile Vergne had gone from 12th to 11th by the end of the first lap, moving towards a point-scoring position and his eventual championship.

Attack Mode was available three times each instead of the usual two and Frijns used it to make a brave lunge on Buemi into Turn 1, but wasn’t able to get past the on-form driver just yet.

The opening lap clash between Lopez and Lotterer had further repercussions when the former stopped on-track on Lap 5, bringing about a Safety Car, while DS Techeetah’s Lotterer would soon also retire.

On the restart, Sims broke away from the pack, leaving Buemi and Frijns to continue their argument over second.

Frijns was then able to swoop around Buemi at Turn 1 on Lap 9, then closed up on Sims with 21 minutes remaining, before muscling past the BMW I Andretti Motorsport on Lap 17.

From there, Frijns pulled away while his Envision Virgin Racing team-mate, Sam Bird, was eyeing Buemi for third.

He could not get by, and about one second covered Sims, Buemi, and Bird in second to fourth respectively at the chequered flag.

In terms of the championship contenders, di Grassi and Vergne were still stuck in 10th and 11th respectively with around half an hour remaining.

The former used Attack Mode to then get by Gary Paffett for ninth position on Lap 12 and Vergne soon also made his way past the HWA Racelab entry.

Evans was sitting just head in eighth, attacking Audi’s Daniel Abt but unable to find a way past the German.

Instead, Abt passed Stoffel Vandoorne (HWA Racelab) and Evans eventually followed, then they got past the Nissan e.Dams car of Oliver Rowland in consecutive laps to sit fifth and sixth.

That was where Abt remained, but Evans appeared to go across the nose of Di Grassi, in the other Audi on the final run to Turn 11.

They ended up in the wall and Rowland was back in sixth for the chequered flag, from Vergne, Vandoorne, Antonio Felix da Costa (BMW Andretti), and Paffett.