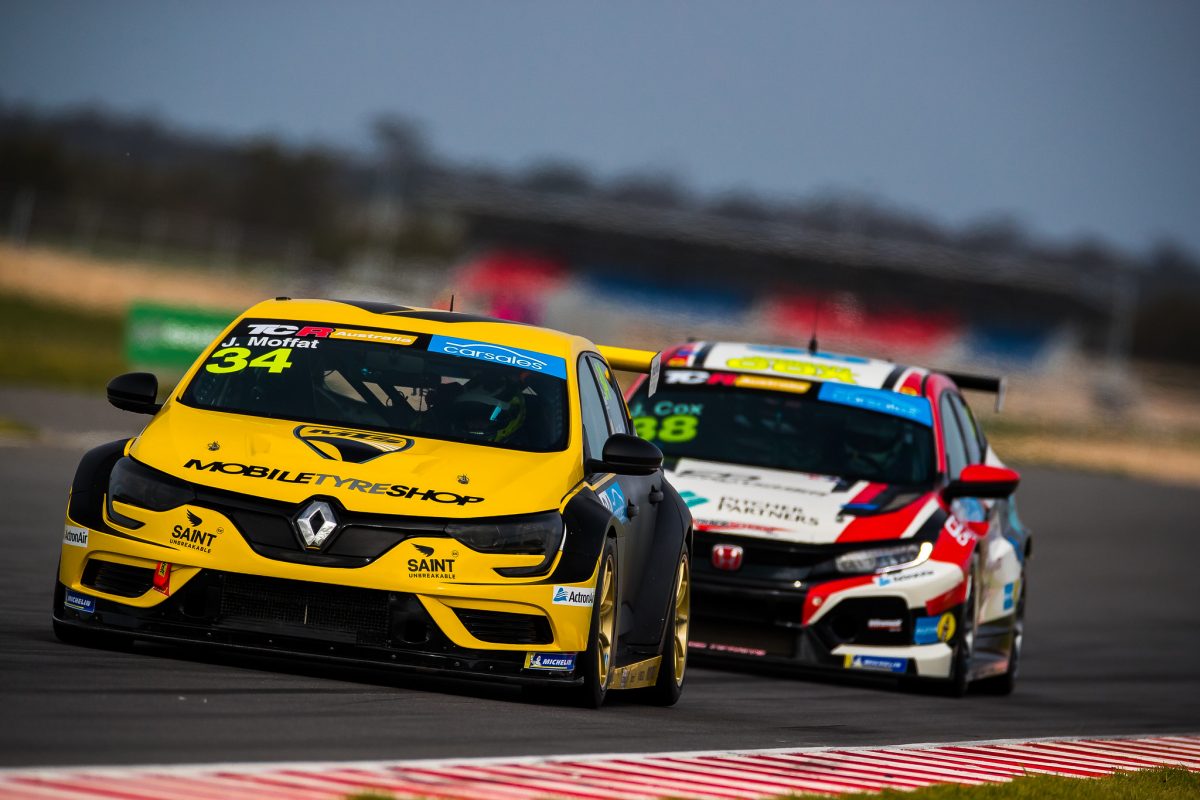 James Moffat has praised TCR Australia’s unpredictability after admitting he never envisaged to bounce back from a practice crash at The Bend Motorsport Park.

The Garry Rogers Motorsport driver thought his weekend may be over prematurely after being the innocent victim of a heavy crash during Friday practice.

Moffat’s Renault Megane copped significant damage to the rear after being hit by an out of control Will Brown (HMO Customer Racing – Hyundai) at 140km/h after aquaplaning on standing water on the approach to Turn 6. 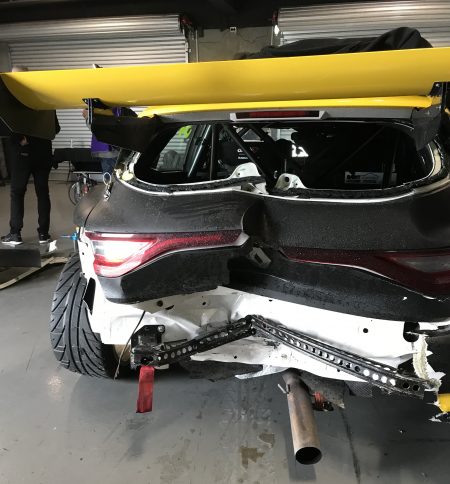 The damaged Megane after Practice 1

The damage ruled the former Supercars full-timer out of Practice 2 and placed doubt on a possible return for Saturday’s race due to a lack of spares, being one of a handful of cars that exist globally.

However, after taking the rear roll bar and exhaust to nearby Tailem Bend for off site repairs and a trip to a Bunnings Warehouse store to retrieve polycarbonate to create a new rear windscreen the car returned to action.

Moffat went on to score pole position for Saturday’s race, the first for the Megane TCR car in the world, before being taken out of the lead by Wall Racing’s Jordan Cox.

On Sunday he fought back to a pair of third place finishes having started the day from seventh on the grid.

“No (I never envisaged the turnaround), but that’s the beauty of this series I think, anything can happen,” said Moffat.

“And it’s proving that, and I think that’s what’s making it an exciting form of racing.

“When you’re faced with those sort of situations (on Friday) it’s just about getting back out there.

“I drove the car back so I thought, ‘Oh, maybe we’ve got half a chance, maybe it’s not that bad,’ but then when I hopped out and the back of the car was missing, I thought ‘Oh, no way we’re getting back out.’”

GRM is very much a pioneer by electing to run the new Megane recently developed by Swiss team Vukovic Motorsport.

However, after recording three podiums, Moffat, who now sits second in the series, is confident progress is being made in turning the car into a weapon.

Team-mate Chris Pither in the sister Megane finished fifth in Race 1 before crashing out of second in Race 2 in an incident that ruled the car out of the final heat.

“We’ve definitely made a lot of progress with it, there’s only four of them racing in the world, and we’ve got two of them here,” Moffat added.

“There’s about 800 Hyundais out there, and Alfas, and Hondas, and there’s quite a few Audis, so we’re outnumbered in that department.

“Every time we take the car out we learn more about it, I’m learning.”

“I’ve really enjoyed that challenge as well, (it’s a) different driving style, and I’ve got one of the best gurus in pit lane, with Richard Holloway down there, and Dave Swenson involved with Chris’s car.

“We’ve got some great brainpower behind us, we’re slowly chipping away at it.

“I still see that there’s a lot of potential in the car, you know, the Hyundais and Hondas and Audis and all those cars have got three, four, five years of development on us.

TCR Australia will be back in action next month when the series heads to Queensland Raceway on August 2-4.