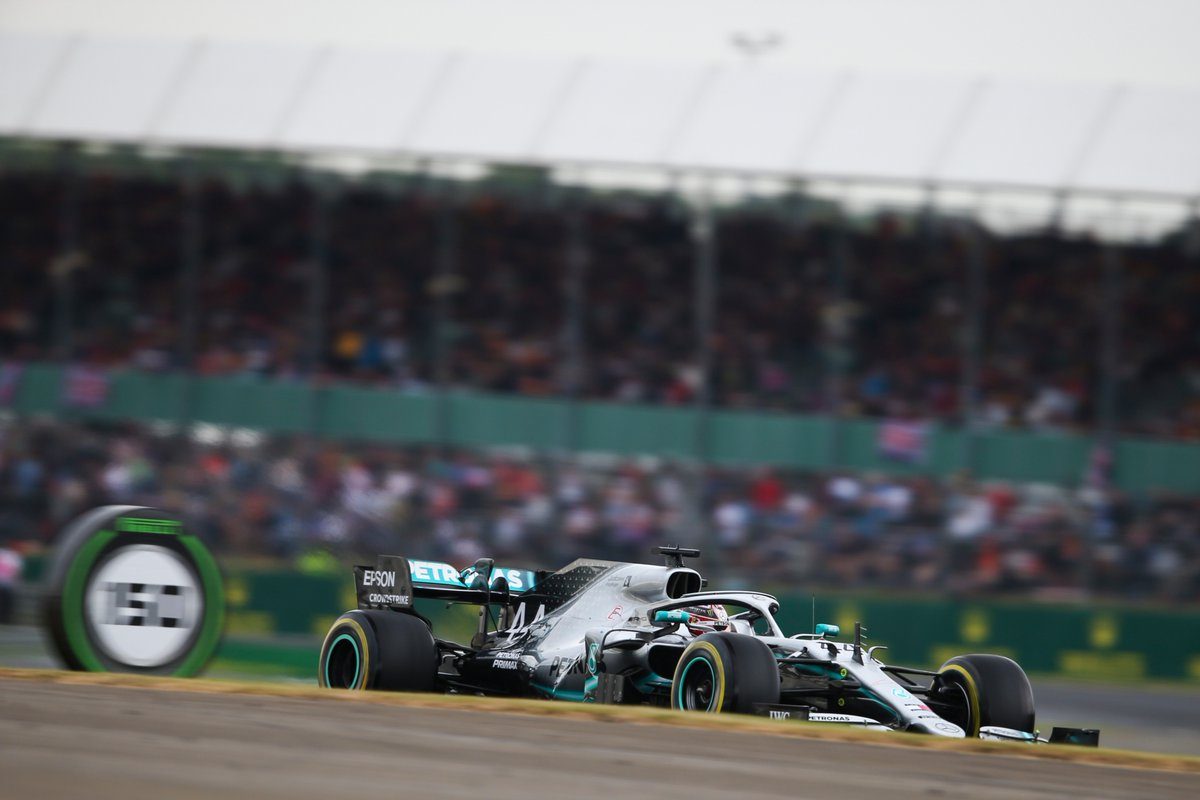 Lewis Hamilton has won the British Grand Prix for a sixth time thanks in part to a fortuitous Safety Car which allowed him to effectively jump Mercedes team-mate Valtteri Bottas.

Hamilton was able to retain the lead when he made his sole pit stop under the race’s sole Safety Car, and also nicked the bonus point for the fastest lap from Bottas on the final lap.

Bottas ran second from the restart until the end of the 52-lap race, with Charles Leclerc third in a Ferrari, from the Red Bulls of Pierre Gasly and Max Verstappen.

The latter looked likely for a podium until he was shunted by Sebastian Vettel, who ended up classified in 16th position, while Daniel Ricciardo finished where he started in seventh position.

Bottas led Hamilton, Leclerc, Verstappen, Gasly, and Vettel through the opening corners, while Lando Norris squeezed past Ricciardo to take seventh at Maggotts.

Hamilton appeared to have more speed on his team-mate in the first few laps but when he criss-crossed passed Bottas off Brooklands on Lap 4, the Finn stuck his Mercedes straight back down the inside at Copse.

While Hamilton was largely keeping Bottas within DRS range, the key battle became that between Leclerc and Verstappen for third.

Verstappen attacked through Village and The Loop on Lap 11 but that only made him vulnerable to Vettel at Brooklands, forcing the Red Bull driver to defend.

A Ferrari and a Red Bull did swap spots at Village a lap later, but that was when Gasly passed Vettel, only to pit at the end of the lap and swap his medium compound tyres for a set of hards.

Ricciardo, still eighth at that time, followed Gasly into the lane and switched from softs to mediums, with his undercut of Norris soon rewarded.

Leclerc and Verstappen pitted together on Lap 14, going from soft and medium tyres respectively to mediums, and while Verstappen just got his nose in front in the fast lane, he undid the Red Bull crew’s good work when he ran wide and handed the spot back at The Loop on their out lap.

As such, the Dutchman’s attacks continued, including a big dive at Stowe on Lap 18 which he had to get out of when Leclerc squeezed him late into the corner.

Bottas, meanwhile, had pitted for another set of mediums, leaving Hamilton to assume the lead, and that would be critical when Antonio Giovinazzi slid his Alfa Romeo off the road at Vale and drew a Safety Car on Lap 20.

Hamilton was able to complete his pit stop and remain in the lead, from Bottas, while Vettel pitted from second and resumed in third.

Verstappen, Carlos Sainz, and Ricciardo also pitted, as did Leclerc, although the latter had trundled around for an extra lap before filing into the lane.

As such, the order ahead of the Lap 24 restart was Hamilton, Bottas, Vettel, Gasly, Verstappen, Leclerc, Sainz, and Norris, while Ricciardo was 11th.

Of those aforementioned, Bottas and Norris were on mediums and the rest on hards.

Ricciardo passed Renault team-mate Nico Hulkenberg at Brooklands on the restart lap, taking advantage of the battle between Norris and Alexander Albon (Toro Ross) which bottled up the mid-pack.

As that happened, Sergio Perez clattered into the side of Hulkenberg and while the front wing on the Racing Point was damaged, the Renault continued for the time being.

Verstappen and Leclerc were going at it again and they banged wheels at Club as the former held the spot from the outside on Lap 24.

Ricciardo rounded up Albon at Brooklands on Lap 25 and was pressuring Norris for eighth within a few more laps, although that was ultimately resolved by the McLaren driver having to pit again.

Gasly let Verstappen take over fourth position on Lap 27, but Leclerc’s move on the Frenchman on Lap 36 was well-earned when he hung on the outside at Village. 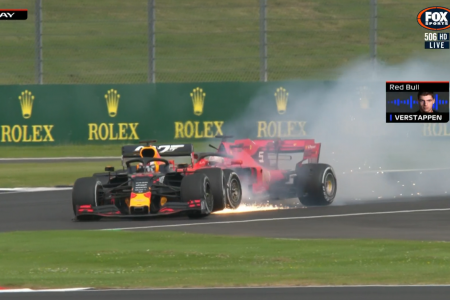 Verstappen rounded up Vettel for third into Stowe on Lap 37, only for Vettel to arrive with the fronts of the Ferrari locked up at Vale and punt the Red Bull.

Verstappen drove out of the gravel and resumed in fifth while Vettel had to pit for a new nose, at which time the Ferrari crew also took the opportunity to give him medium compound tyres.

Bottas pitted with seven laps remaining to take on soft compound tyres, having been on mediums since the start of the race, holding on to second position.

Despite chat that Hamilton might also make a second stop, the Brit stayed out and his new margin of a bit over 20 seconds was largely unchanged in the remaining laps, until he pulled out a 1:27.369s on the final lap.

Ricciardo closed up on Sainz and even had a look at Stowe on Lap 46 but that McLaren was not pitting again and they remained as you were, in sixth and seventh.

Kimi Raikkonen got his Alfa Romeo up to eighth, Daniil Kvyat finished ninth in his Toro Rosso, and Hulkenberg did make it home in 10th despite appearing to slow with around nine laps to go.

Norris missed out on points, as did Albon, while Racing Point’s Lance Stroll was last on the lead lap in 13th.

Vettel was given a 10-second time penalty for the Verstappen hit which was all but academic.

There were three drivers not classified as finishers, namely Giovinazzi and the Haas pair of Romain Grosjean and Kevin Magnussen.

Both had to pit for punctures at the end of the opening lap when they touched as they entered the Wellington Straight, and neither made it to a double-digit haul of laps.