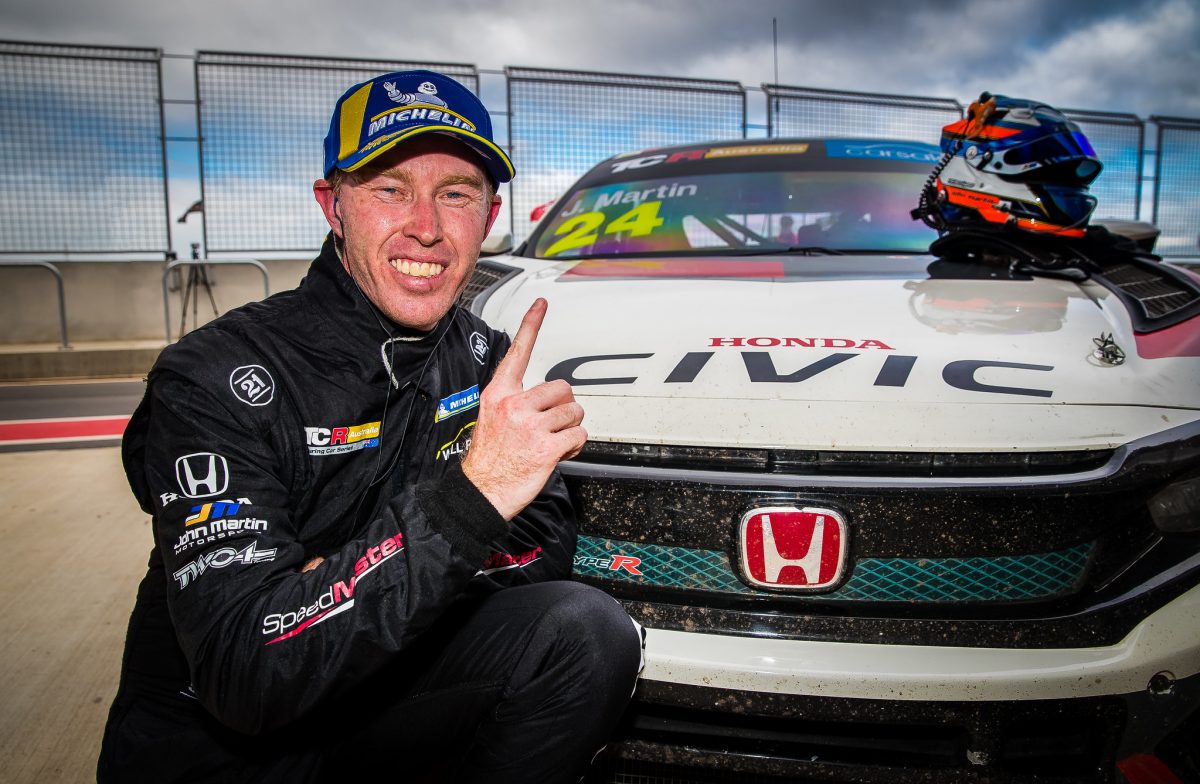 John Martin admitted his maiden TCR Australia win felt like it was ‘a long-time coming’ having been plagued by incidents prior to his triumph at The Bend Motorsport Park.

Martin produced an impressive drive in Race 3 at the South Australian circuit having started from fourth on the grid.

Martin’s victory has come after a campaign littered by misfortune.

The Queenslander was taken out of Race 3 at Sydney Motorsport by Nathan Morcom and was the victim of first lap contact in the opening race at Phillip Island.

That weekend worsened when his Civic Type R suffered a puncture in Race 2, before being involved in an opening lap shunt in the final heat, that required Wall Racing to place Martin in a different chassis for the trip to The Bend.

“It obviously feels amazing,” said Martin, who also finished third in Race 1 and fourth in Race 2.

“It feels like it’s been a bit of a wait, sort of a long time coming.

“We’ve had plenty of pace and decent pace at Eastern Creek (Sydney Motorsport Park) in qualifying, and a few tyre issues.

“And then at Philip Island, (we) just couldn’t take a trick, and to come here (The Bend Motorsport) we’ve had reasonable pace.

“I just couldn’t get my s*** together in qualifying, qualified nowhere. That was all on me.

“The car was great just yesterday (but) we had that overheating problem.

“I knew if I could get to the front, and get a lap, where I could break them, and then I’d drive away, but it’s just so hard to do that, so, yeah finally got that opportunity in the end there.”

A move to touring car racing is a new career step for Martin this season, having spent the majority of his career racing in single seaters, in the defunct A1GP and Superleague Formula, and in sportscars.

While inexperienced in front-wheel-drive tin tops, the Queenslander is enjoying the challenge.

“Coming in to this year, hadn’t really done too much, and this is obviously a totally different kettle of fish,” he added.

“So I’m still learning as I go along, it’s just different.

“Even the way you explain the set-up stuff to the boys, in a normal car I would do something like this, or be asking for this, but in this it’s either backwards or that it just totally doesn’t work.

“(I’m) learning every time I go out, the boys are doing an amazing job because every time I’ve been out the car is getting better, getting kind of what I want in it, and I’m learning to drive it too.”

Martin’s victory has seen the Honda driver climb to seventh in the TCR Australia Series standings ahead of Round 4 at Queensland Raceway from August 2-4.