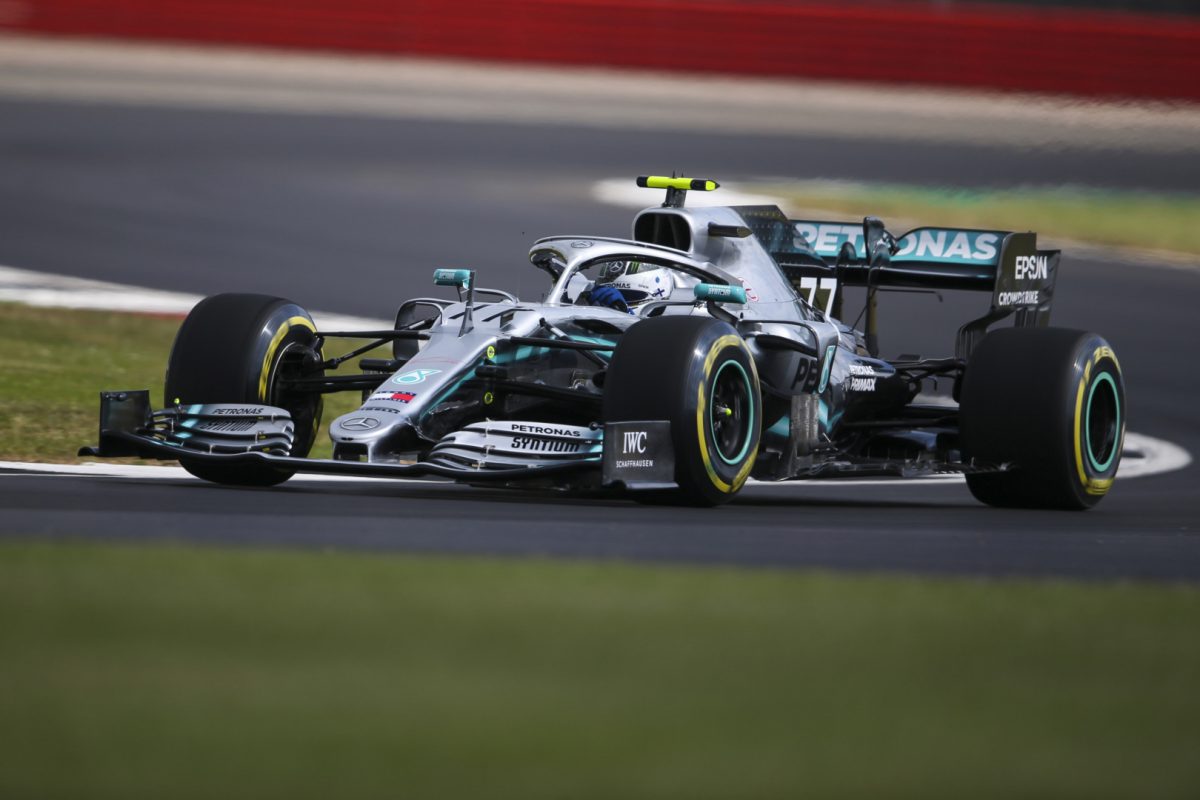 Valtteri Bottas has taken pole position for the British Grand Prix after Mercedes team-mate Lewis Hamilton could not quite find enough time on his final run in qualifying.

Bottas ended up on top with a track record 1:25.093s and while Hamilton improved after a poor first run, he fell short by 0.006s.

Charles Leclerc was third fastest in his Ferrari while Daniel Ricciardo put his Renault seventh on the grid.

Bottas’ fastest lap came on his first run, bettering Hamilton’s opening Q3 flyer by 0.252s after the Brit made an untidy run through Brooklands.

Red Bull Racing’s Max Verstappen sat third, Leclerc was curiously more than half a second off the pace in fourth, and they were followed by their respective team-mates in Pierre Gasly and Sebastian Vettel.

The Renaults of Ricciardo and Nico Hulkenberg were seventh and eighth respectively, while Lando Norris and Alexander Albon stayed in their garages due to a shortage of soft compound tyres.

Norris put his McLaren eighth on the timing screen when he did set a lap time, and that was where he would stay.

Albon, the only driver to drag himself out of the bottom five in the final runs of Q2, made incremental progress when he put his Toro Rosso ninth on the grid.

The starts of the Mercedes’ final runs suggested that the pace was coming out of the Silverstone Circuit, only for Leclerc to then put in the fastest first sector.

Hamilton, however, got better over the course of his lap, but the quarter of a second between he and Bottas proved just too much to bridge even if the latter was not happy with how he finished the session.

“I knew that the first lap was good but it was not perfect and honestly I should have improved in the second run,” said Bottas.

“I didn’t quite get the lap together, especially in the first part of the lap, but I’m glad it was enough.

“It’s not easy to get a good lap together, it’s very easy to do mistakes, and I think everyone was struggling a bit so (I’m) happy to be on top.”

Leclerc also fell short, 0.079s slower than Bottas, but did enough to jump Verstappen, and Gasly saw to it that both Red Bulls would split the Ferraris by qualifying fifth.

Ricciardo was just over a second off the pace and just over two tenths faster in the end than Hulkenberg, who rounds out the top 10.

The two Mercedes will start the race on the medium compound after Bottas did not go faster when he went out on softs at the end of Q2, as will the two Red Bulls, while the rest of the top 10 will set off on the red-marked tyres.

The next row outside the top 10 is an all-Alfa Romeo affair with Antonio Giovinazzi qualifying 11th and Kimi Raikkonen 12th.

Carlos Sainz (McLaren) lost his Q3 berth in the final runs of Q2 and is due to start 13th, ahead of Romain Grosjean (Haas) and Sergio Perez (Racing Point).

Magnussen was 15th when he had to abort his final lap, and his spot in Q2 was taken by Perez when the Mexican lifted himself out of the drop with the chequered flag out.