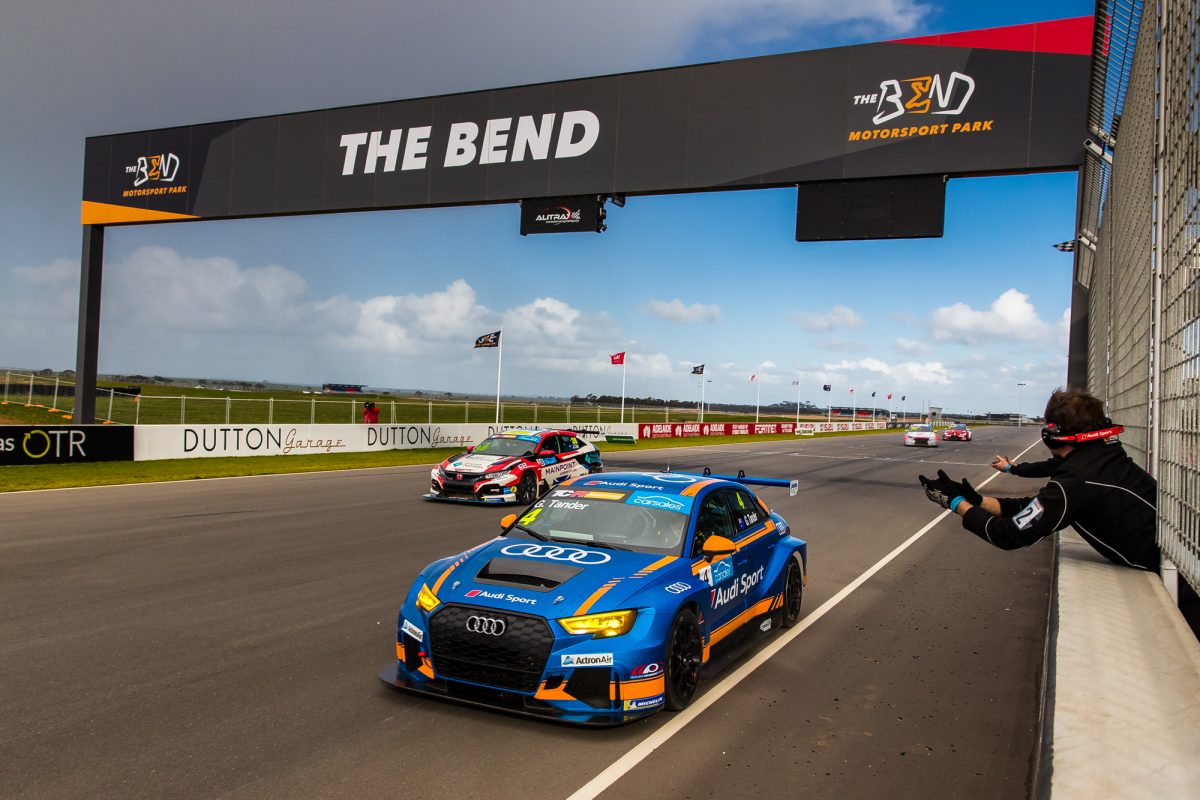 Garth Tander recovered from a mistake to claim a maiden TCR Australia win in a thrilling opener at The Bend Motorsport Park.

Tander claimed a first win for Audi in the series from championship leader Will Brown, who hauled his HMO Customer Racing Hyundai from 16th to second, while Aaron Cameron (Volkswagen) claimed third.

The race saw five drivers spend time in the lead with Tander moving to the head of the 19-car field in the early laps, but a mistake at Turn 11 on Lap 6 saw him drop to fourth.

Cox crossed the line in second but a 10 second penalty for an opening lap clash with pole-sitter James Moffat (Garry Rogers Motorsport – Renault) dropped him to seventh.

There was drama before the race had started as light rain briefly fell moments before the formation lap with the entire field on slick Michelin tyres.

The tricky conditions made for a frantic start as Moffat initially led the field into the Turn 1 but he soon came under attack and was passed by Tony D’Alberto, who started from second, at Turn 4.

Moments later D’Alberto spun out of the lead on his own at Turn 8, handing the advantage back to Moffat.

However, the action continued as Jordan Cox (Honda) made contact with the rear of Moffat, firing the Renault into the gravel trap on the exit of Turn 16.

As a result, Garth Tander (Audi) inherited the lead having started from fourth before the Safety Car was deployed to retrieve Moffat.

The race resumed with Tander leading from Cox, Cameron, Martin, while series leader Brown scythed his way from 16th to sixth.

Tander quickly opened up a gap on Cox but all eyes were on third as Cameron ran wide at Turn 1, which dropped him to eighth.

Further back, Brown pounced to climb to third with Alex Rullo taking a short-lived fourth after dropping behind Martin, with smoke pouring from some loose bodywork on the rear of the Opel Astra.

Just when the race appeared to settle into a rhythm, Garth Tander surrendered the lead after running too deep at Turn 1, which saw the former Supercars star drop to fourth.

The mistake handed the lead to Cox, who was closely followed by Brown and Martin, but that was soon to change as the latter dived by to take second spot, Tander would follow the Honda shortly after.

The battle continued to rage at the front with Cox unable to hold on as Martin took the lead.

However, Tander surged back to the front where he stayed until the chequered flag, with Cox second, although eventually classified in seventh after the penalty.

D’Alberto managed to recover to eighth in front of Moffat and Rullo, who rounded out the top 10, with Russell Ingall (Audi) just behind.

Meanwhile, Chelsea Angelo (Opel Astra) retired with a tyre blowout believed to have been triggered by contact.

Angelo was joined on the sidelines by championship contender Dylan O’Keeffe (Alfa Romeo) and Jason Bright (Volkswagen), who also suffered tyre issues, while Andre Heimgartner (Subaru) stopped on track in the closing stages.

The field will return for a further two 14 lap races on Sunday.

Stewards have since handed out penalties to Cameron and D’Alberto.