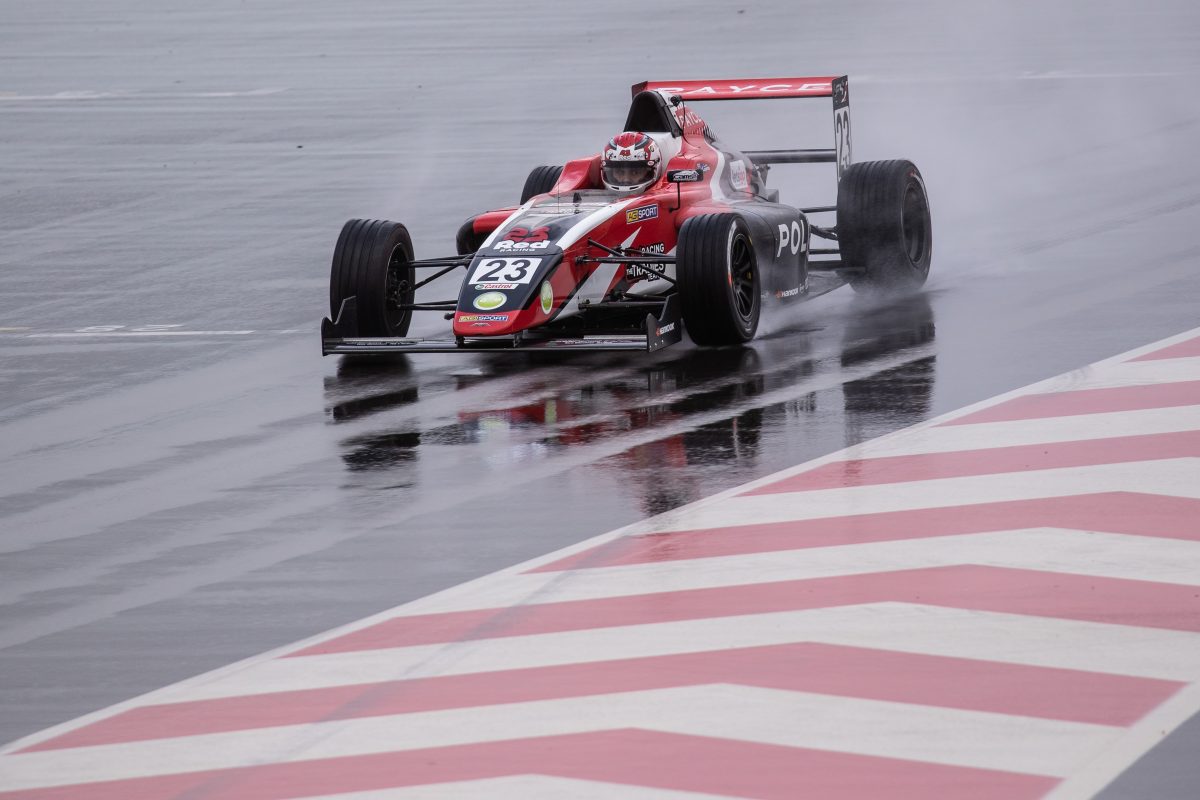 Luis Leeds has secured a maiden Australian Formula 4 Championship with a round to spare after recording two third place results at The Bend Motorsport Park on Saturday.

Leeds (#23 AGI Sport) recorded his 13th consecutive podium finish in a season where he has only missed the podium once during Race 2 in Melbourne, when F4 supported the Formula 1 Australian Grand Prix.

“It’s been a long time in the making. It’s an effort from everyone around me. To finally get it done is a big weight off my shoulders,” said Leeds of the title win.

“The car’s got a few battle scars, I did have to work for it but ultimately I wanted to go out there and win. That’s the mindset I’ve always got.

“I’m not sure what happened in that race, we were just struggling with a bit of pace. I’m looking forward to analysing what happened and go back stronger tomorrow.”

While Leeds wrapped up the title, Team BRM’s Lachlan Hughes was the star performer crossing the line first in both races for the day, before being awarded a five second post-race penalty in the latter race for his incident with team-mate Ryan Suhle.

Hughes was set to take his third race victory in as many rounds over Jackson Walls (#11 Objective Racing) by just 0.152 seconds, however contact with Suhle earlier on Lap 5 demoted Hughes to second after an investigation by the stewards.

Suhle was punted off the road by his team-mate when attempting to make a move around the outside for second place at the left-hander of Turn 2. They both escaped without damage as Suhle recovered to the race track at the tail of the field.

Hughes went on to hunt down race leader Walls, executing a fantastic dive down the inside of Turn 17 with three laps to go and take what was then a provisional race victory.

Hughes crucially finished 5.06 seconds ahead of pole-sitter Leeds in third, meaning he was still able to salvage a second place result and retain the round win.

Walls inherited his first ever Formula 4 victory beating his previous highest result of third at Sydney Motorsport Park during Round 2 earlier in the season.

Suhle was able to take back one position over Emerson Harvey (#76 Shannons/Focus on Furniture) for sixth and seventh respectively.

This morning’s race was a much stronger result for Team BRM as Hughes and Suhle locked down a one-two finish in wet conditions.

Leeds placed again in third, overcoming his team-mate Astuti and Walls who fought hard in the middle of the field.

The AGI Sport driver suffered from poor visibility for the majority of the morning race, falling victim to a fogged up visor.

Astuti would cross the line only 0.361s behind Leeds in fourth as Walls followed in fifth.

Smith only climbed one position to finish sixth while Harvey had a race to forget in seventh after he jumped away slowly from pole position to fall to the back of the field by the end of Lap 1.

The final round of the championship takes place over Sunday featuring three races.

Hughes will start the first race from pole when they set off at 0940 ACST/local time on Sunday.