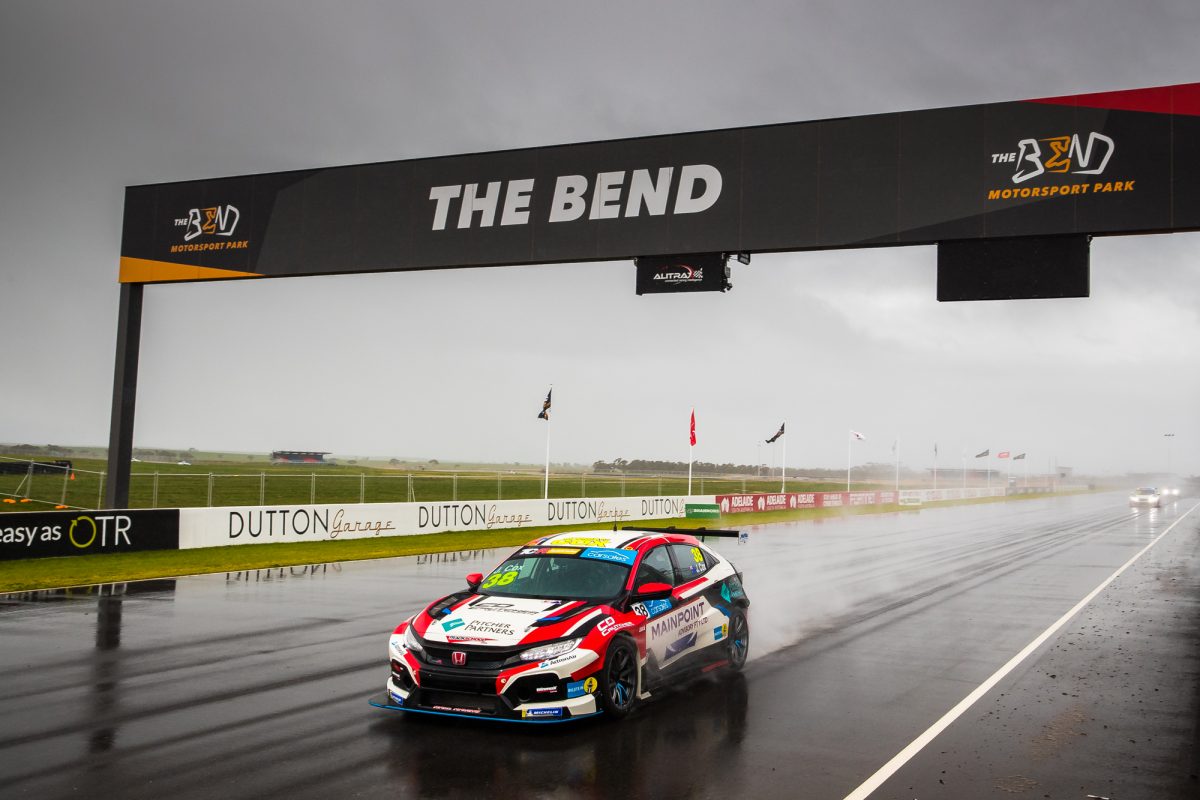 TCR Australia debutant Jordan Cox topped the times in wet conditions in opening practice at The Bend Motorsport Park that was headlined by a crash involving Will Brown and James Moffat.

The Wall Racing Honda driver quickly adapted to his Civic Type R, topping the times early before slotting into second in the slippery conditions.

A late effort once the session resumed after a red flag from the former Improved Production racer saw him stop the clocks with an impressive 2:10.00s.

Cox was 0.6s faster than his nearest rival Dylan O’Keeffe in the Ash Seward Motorsport Alfa Romeo, while Nathan Morcom in the HMO Customer Racing Hyundai was third.

The session was, however, halted after 12 minutes when series leader Brown (HMO Customer Racing  Hyundai) fired into the back of Moffat at speed on the entry to Turn 6.

It appears Brown aquaplaned before hitting the rear of Moffat’s Renault hard, causing significant damage to the rear of the Garry Rogers Motorsport entry.

“It was 100 per cent my fault. The car aquaplaned and I slid into him,” said Brown.

“I went straight down to apologise. It’s definitely not something I like. I would rather have crashed into the wall than hit him.”

“It was a massive hit. I didn’t even see him coming,” added Moffat.

“It was pretty slippery at that corner and I think he got caught out. He’s been to apologise and that’s fine.”

Neither car would return to the track when the session resumed after a brief red flag.

The session began with the track drenched following a period of prolonged rain at the 4.95km South Australian circuit.

Series leader Brown posted the first indicative lap of 2:16.44s in his Hyundai i30 which was soon surpassed by the Wall Racing Honda Civic of Tony D’Alberto and Andre Heimgartner’s Kelly Racing Subaru.

Times continued to tumble as a dry line started to appear with O’Keeffe ducking into the 2:13s bracket before the session was halted after 12 minutes.

A flurry of fast laps followed once action continued as Cox, O’Keeffe and Morcom took advantage.

Russell Ingall (Audi) on his debut in the category was ninth fastest as Alex Rullo (Opel Astra) completed the top 10.

The 19 car field will return to the track for a second 30 minute practice at 1530 local time.