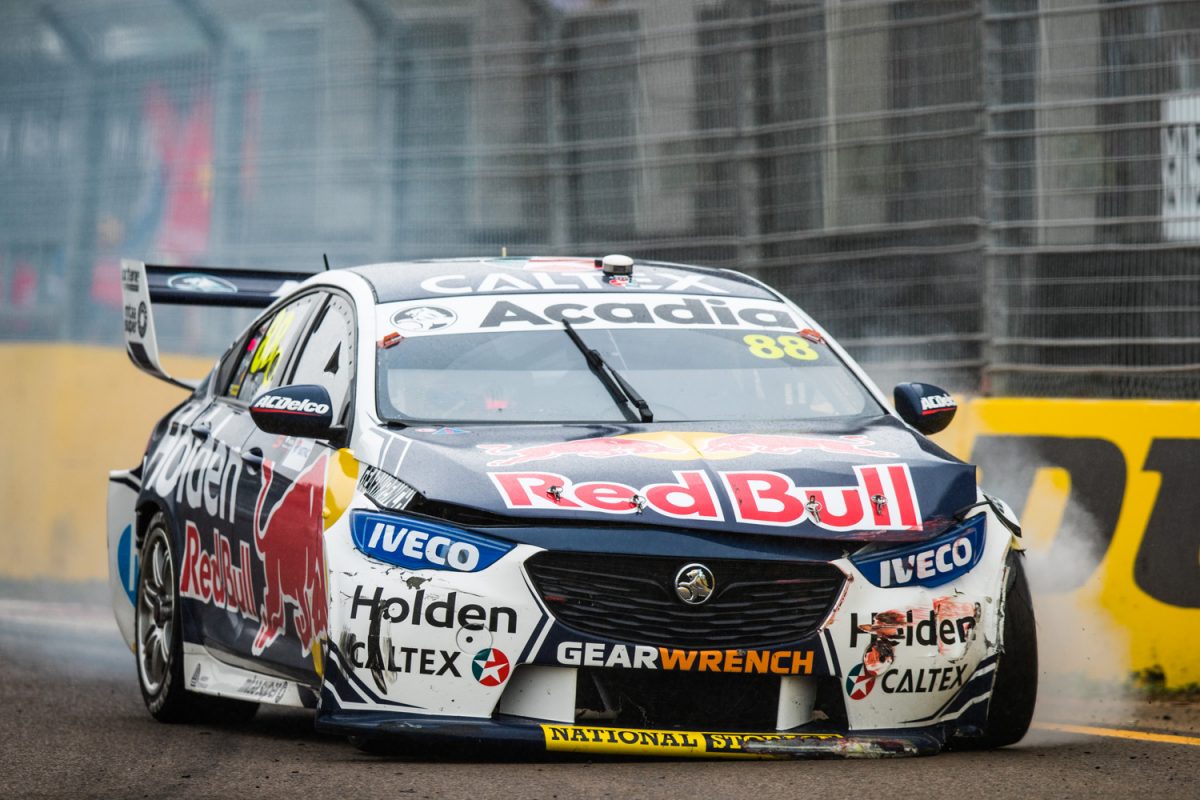 Jamie Whincup following his impact with the wall during Race 18

Triple Eight was surprised to see Jamie Whincup crash out of Race 18 but believes the pace he was showing would have seen the seven-time champion challenge for victory.

Whincup made a rare unforced error when he lost control of the #88 Red Bull Holden on the exit of Turn 6 in slippery conditions.

The error resulted in the car sustaining damage to the front and rear after spearing into the inside wall. Whincup attempted to limp the car back to the pits before being instructed to stop on circuit.

After starting from 12th on the grid, the series’ most successful driver had scythed his way up to fifth by Lap 15 before the mistake caught his team by surprise.

Although team manager Mark Dutton has confirmed the his driver was pushing hard and the team were prepared to take risks.

“(I was) very surprised but on the flip side he was pushing hard, his lap times compared to everyone else, I truly believe we were on for the win with Jamie, so that’s how quick he was,” said Dutton.

“Obviously he started from P12 there, so you saw him coming through real strong in those slippery conditions.

“We were prepared to take some risks and you’ve got to be prepared, or do it together, we knowingly decided how hard to push in those conditions and unfortunately sometimes you push too hard.

“We all do it together.”

The team has since confirmed upon return to its Brisbane workshop that the #88 chassis has avoided significant damage and will be repaired in time for the team’s test day at Queensland Raceway next Thursday.

“It looks like the damage is mostly just bolt-on parts, so the front rail extensions and all the cooling system at the front was damaged, which is ultimately what meant we couldn’t keep going,” Whincup’s engineer David Cauchi told the team’s website.

“From what we’ve seen so far, there’s no chassis damage, so it’s just the bolt-on parts, a couple of suspension items and bodywork items.

“It is a bit of extra work before the test day in terms of renewing all the spares, so there’s a decent amount of extra work, but nothing too outrageous.”

While the team suffered the disappointment of Whincup’s retirement, his opposite number Shane van Gisbergen ended the team’s winless run, that stretched back to April, with a hard fought victory on Sunday.

The victory arrives just days after confirmation that Holden has recommitted a further two years to Supercars and Triple Eight.

Triple Eight’s drivers will be back in action this weekend to contest the fourth round of the Australian GT Championship at The Bend Motorsport Park.