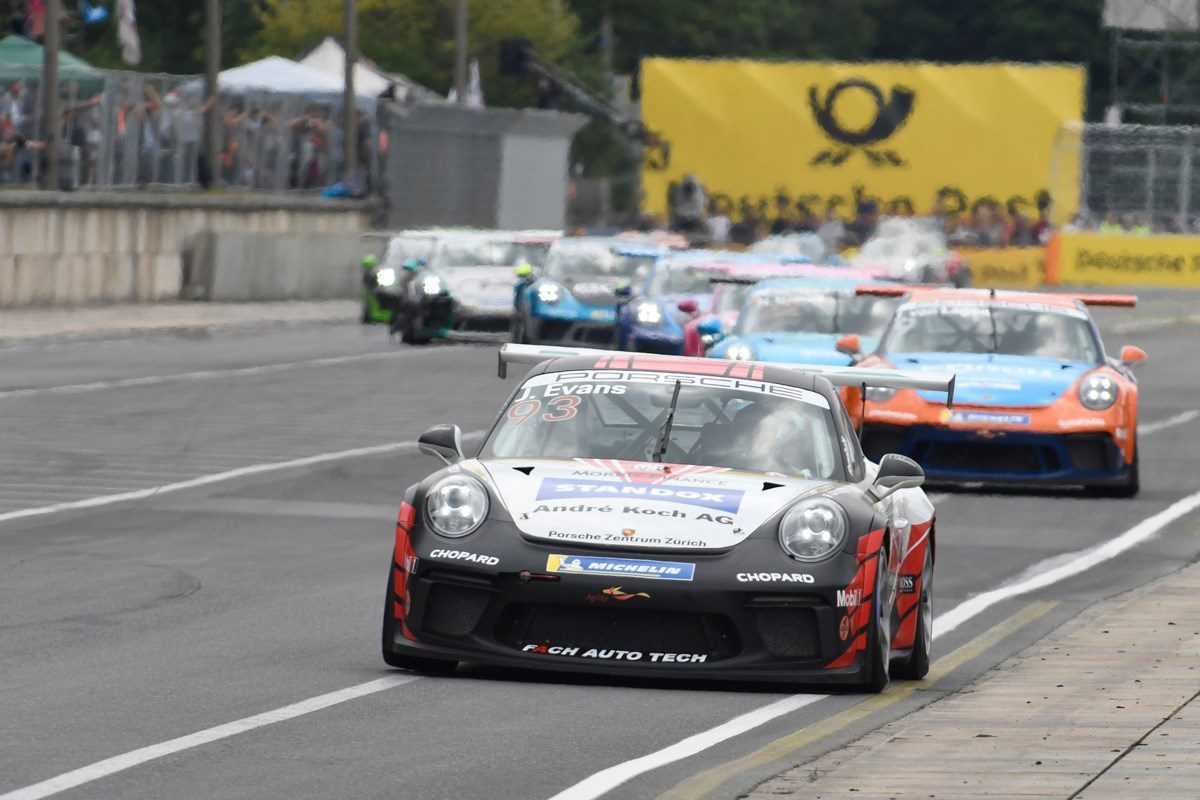 The Kiwi driver finished third in the opening race of the weekend behind Julien Andlauer and Michael Ammermuller, climbing from seventh on the grid.

There was an early touch between Andlauer and pole-sitter Larry ten Voorde, dropping the latter down the order, only to later retire after another incident.

Evans lined up ninth for the second race, progressing to fifth in the 31-lap encounter, with Ammermuller heading affairs from Leon Kohler and Andlauer.

It was Ammermuller’s second win of the year and came after contact saw the leading three, all team-mates at Huber Racing, eliminated from the race.

Carrera Cup Germany heads to Zandvoort next on August 9-11, though Evans will be in action to the Porsche Supercup at Silverstone this weekend (July 12-14). 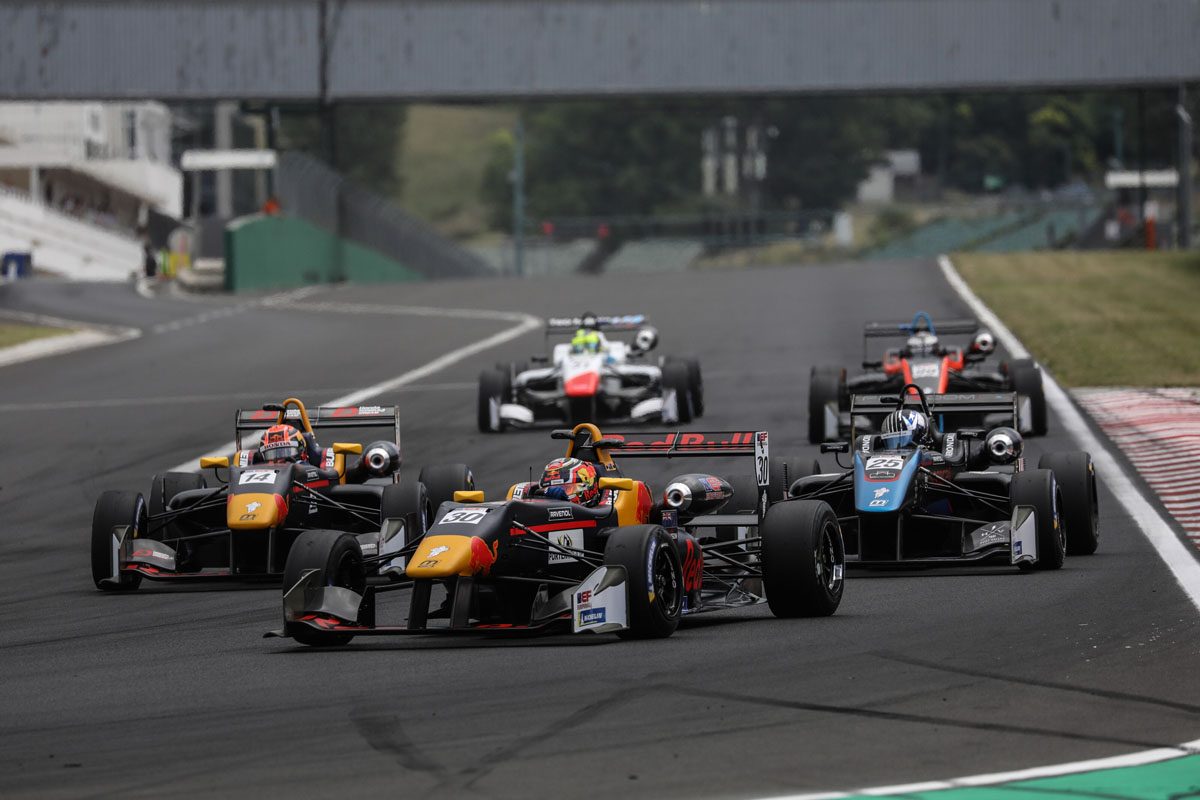 Liam Lawson at the Hungaroring

Liam Lawson snagged a podium in the opening Euroformula Open race of the weekend at the Hungaroring, before slipping to 10th in Race 2.

The Kiwi was the best placed of the three Antipodeans in the opening race, with Calan Williams across the line eighth while Jack Doohan trailed home in 16th.

Doohan had qualified eighth before he slipped down the order in the 17-lap affair, finishing nearly 30 seconds in arrears of race winner Marino Sato.

The Japanese driver then claimed victory in the weekend’s second race as Doohan recovered to seventh, one spot ahead of Williams and three clear of Lawson.

Euroformula Open next moves to the Red Bull Ring in Austria on July 13-14. 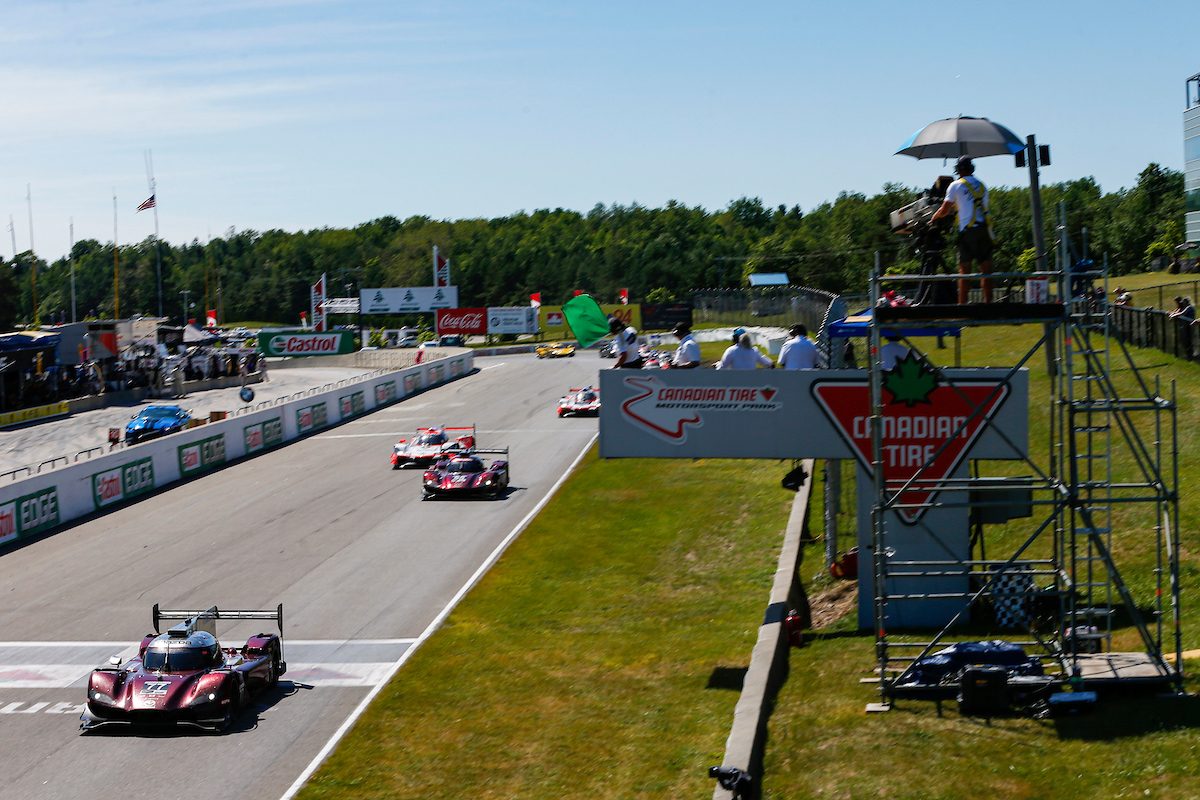 The race winning #77 leads the field at Mosport Park

Tristan Nunez and Oliver Jarvis headed a second one-two result for the team in as many weeks, with Harry Tincknell and Jonathan Bomarito coming home second.

The Penske pairing of Dane Cameron and Juan-Pablo Montoya were third in their Acura DPi entry.

The pair banked 116 laps to finish ahead of the BMW M8 GTE of John Edwards and Jesse Krohn, with Nick Tander and Patrick Pilet third in another Porsche.

Australian Ryan Briscoe was fifth in the Ford GT he and Richard Westbrook piloted.

Taking out the GTD class was the BMW M6 GT3 of Bill Auberlen and Robby Folley, while the sole LMP2 entry finished 31st in the 34 car field, 24 laps down on the overall race winner.

Lime Rock hosts the next round of the series on July 19-20, though DPi and LMP2 classes will be absent from that event. 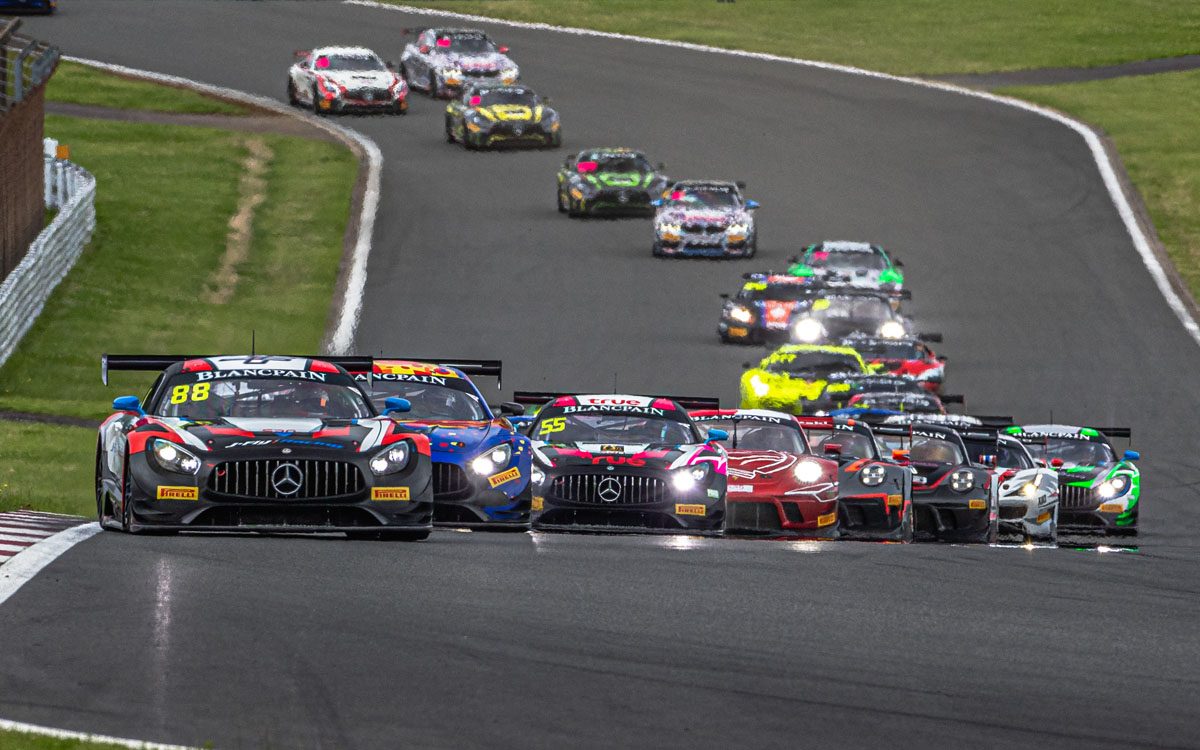 The start of Race 2

Honours at Fuji International Speedway were shared between Mercedes and Audi in the latest round of the Blancpain GT World Challenge Asia series.

Roelof Bruins and Manuel Metzger took out the opening race of the weekend aboard their Mercedes-AMG GT3, before the Audi pairing of Weiron Tan and Martin Rump triumphed in the second.

Tan and Rump had finished a narrow second in the opening race before going on better in Race 2, which saw the Triple Eight Race Engineering Australia entry and Prince Abdul Ibrahim and Jazeman Jaafar home in fifth.

They’d moved up from an 11th place finish in the opening race of the weekend.

Aussies Andrew Macpherson and Ben Porter combined to bring the AMAC Motorsport Lamborghini home in 15th in Race 2, one spot back from where they’d ended the opener.

New Zealander Chris van der Drift was a Lap 2 retirement in the Porsche 911 GT3 R he shared with Li Chao in Race 1, the duo faring no better in Race 2 as they completed just 13 laps.

The Blancpain GT World Challenge Asia calendar takes teams to the Korea International Circuit for the next round on August 3-4. Alex Marquez has retaken the Moto2 championship lead from Thomas Luthi by winning at Germany’s Sachsenring.

The EG 0,0 Marc VDS rider was slow away from pole on his Kalex and exited the first corner in fifth after a touch with Iker Lecuona (American Racing KTM).

Marquez’s second attempt to pass Lecuona at Turn 1, who was by then leading, came good on Lap 7, and he led the rest of the way.

Luthi (Dynavolt Intact GP Kalex) finished fifth despite a long lap penalty for contact with the other Marc VDS entry which saw Xavi Vierge go down at Turn 1.

That became a pass also for the championship lead given that Marcos Ramirez followed him through to make a Leopard Racing Honda one-two.

Tuuli appeared to be creeping away from them after battling for the first three laps, before an incident between Eric Granado (Avintia) and Lorenzo Savadori (Gresini) saw the latter crash into an air fence and draw a race-ending red flag.

Moto2 and Moto3 resume after the summer break at Brno on August 2-4, while MotoE is back a week later at Spielberg. Jonathan Rea leads the Superbike World Championship for the first time in 2019 after he swept the Donington round and Alvaro Bautista crashed out of the opener.

The four-time champion took the points lead from the previously unstoppable Aruba.it Ducati rider when he won Race 1 by more than 11 seconds, as Bautista highsided on Lap 11 while running fifth.

In the Superpole Race, Rea passed leader Tom Sykes’ BMW at his second attempt and was leading when a red flag brought a premature end to proceedings.

Sykes was not among the several who had initially gone down on oil dropped at the Melbourne Loop, but did so on his way back to the pits and was ultimately classified a non-finisher, promoting Bautista to fourth.

The factory Kawasaki man leads Bautista by 24 championship points on the way to Laguna Seca this weekend (July 12-14 local time). 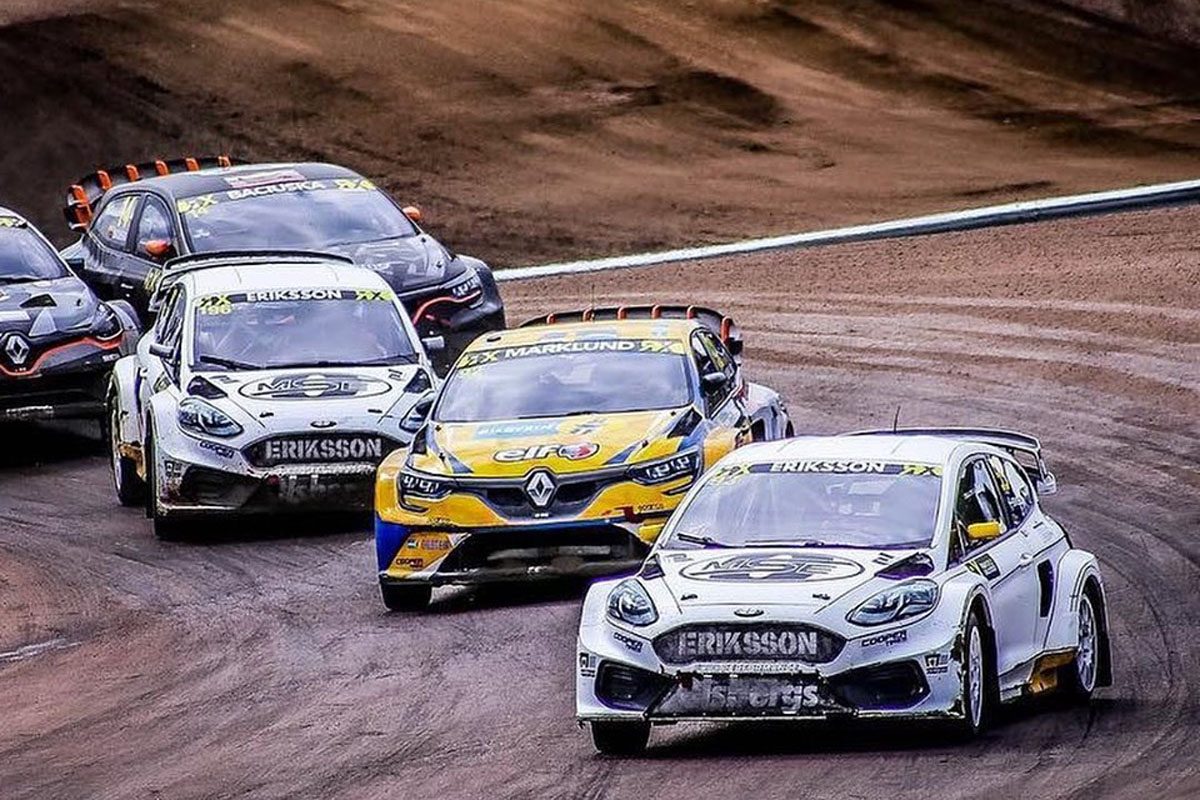 Wildcard entry Sebastian Eriksson won the Swedish round of the World RX, seeing off the challenge of Kevin Hansen in the final.

Eriksson was the fastest driver in the final qualifying session, and then won the semi-final over Gronholm to snare pole for the final.

He then survived the final which saw punctures for Gronholm and Timmy Hansen.

The World RX now moves to Canada on August 3-4 for the seventh round of the 2019 season. Norbert Michelisz, Mikel Azcona, and Tiago Monteiro, each took a race win in the Portugal World TCR event on the streets of Vila Real.

Azcona (Cupra) took out Race 2 after passing Ma Qing Hua when the Alfa Roma driver made a mess of his joker lap.

Race 3 went to Monteiro after the Honda driver got by KCMG team-mate Attila Tassi on Lap 4.

Esteban Guerrieri (Honda) leads Michelisz by a reduced margin of 24 championship points on the way to the seventh event at Ningbo on September 13-15 after two non-points results in Portugal.