Triple Eight team Mark Dutton said he was excited to be able to assist in extinguishing a dramatic pit lane fire on Nick Percat’s car during a chaotic Sunday race at Townsville.

Dutton rushed to the Brad Jones Racing driver’s aid after a fire broke out on his Commodore following a fuel hose failure in a pit stop. As Percat left the pit box, a fire ignited from the spilt fuel on the ground and on the rear of his car.

Aware of the situation, Percat stopped at the end of pit lane where he was soon greeted by Dutton and a member of the DJR team Penske pit crew, who had swiftly grabbed fire extinguishers to put out the fire.

Relieved that nobody was hurt, Dutton admitted it was an exciting experience, revealing that he was prepared to run down to the BJR pit bay to help out.

“It was so exciting and fun because nobody got hurt and the car didn’t burn to the ground,” said Dutton.

“It was pretty good. Jordan, one of our pit crew, he was first on the spot.

“I walked out and I was actually really excited to run down to the other end of the pit lane, if they needed a hand. That’s where I was looking as (it was) Ben Croke from next door at DJR Penske who pointed down the pit lane.

“I didn’t even know the car was there because I was excited about heading down that way. So of course you run over and do what you can. Get to pull the pin while you’re running. 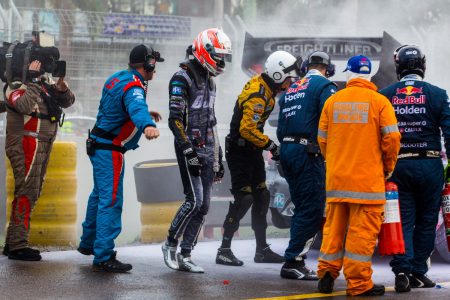 Nick Percat climbs out of the burning BJR Holden

“Good on Percat being able to get out of the car, because that’s part of the requirement with how quick he jumped out of the car.

“Good on him because at the end of the day this is sport and we don’t want anyone hurt.

“There’s no team hats at that stage. It’s all everyone’s welfare, and everyone would do it for each other.”

Brad Jones, team owner of the car involved, praised the camaraderie in the paddock following the incident as no less than three rival teams including Walkinshaw Andretti United assisted in extinguishing the fire.

The Supercars family sentiment was echoed by race winner Shane van Gisbergen who also revealed that Dutton has experience of putting fires out and labelled him a ‘superman’.

“It wasn’t only our team. DJR was there. I think the Walkinshaw guys were helping down the other end. That’s pitlane. We all battle and go crazy on the track but we’re all one big family,” said van Gisbergen.

“(I) had my birthday a few weeks ago, demo derby. Every car that lit fire, Dutto (Dutton) was there, superman with his fire extinguisher. I think he’s had some practice.”