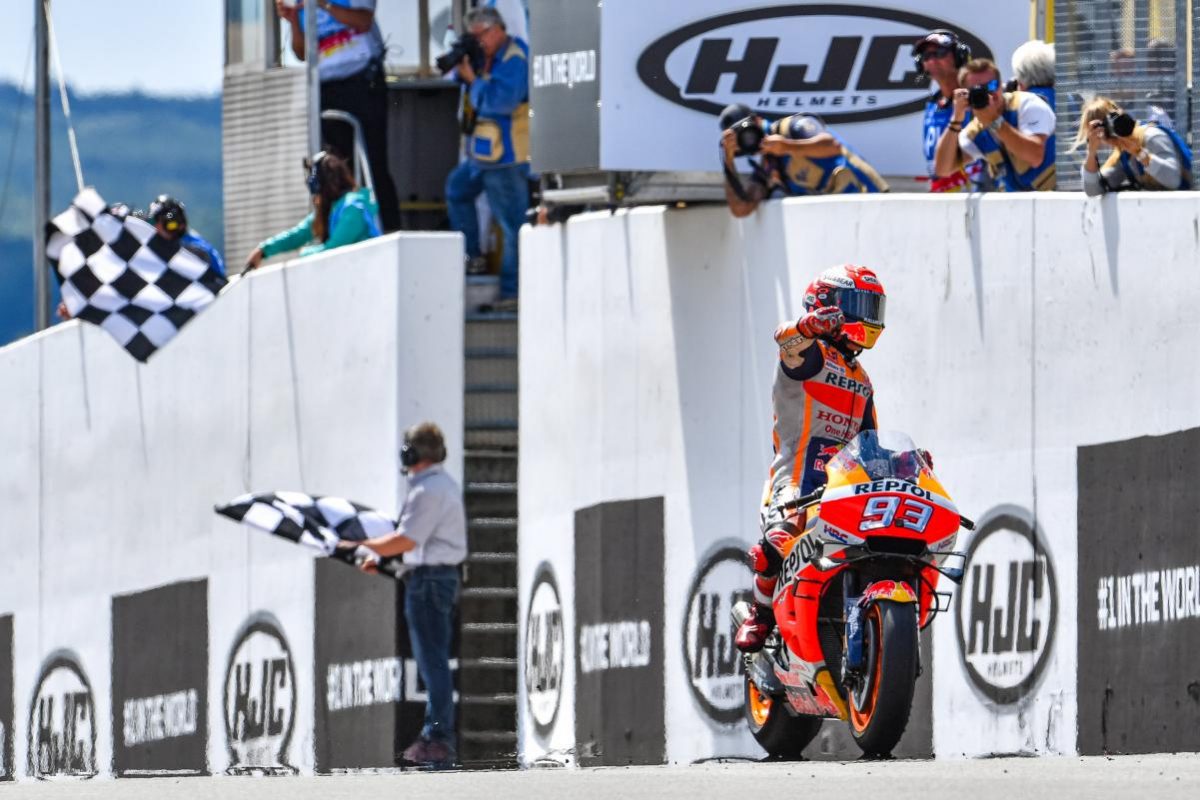 Marc Marquez is more than two races clear of his championship rivals after a dominant victory in the German MotoGP.

The Repsol Honda rider was unchallenged for most of the 30 laps around the Sachsenring having been headed only during the run to the first corner.

Maverick Viñales was strong enough on his Monster Energy Yamaha to keep Cal Crutchlow behind him as they finished on the podium, while Jack Miller was sixth.

Fabio Quartararo (Petronas SRT Yamaha) started well from the middle of the front row but Marquez braked late into Turn 1 and emerged with the lead, from Viñales, Miller, Alex Rins, Crutchlow, and Quartararo.

Rins had to twice pass Miller before he overtook Viñales at Turn 12 on Lap 4, but could not match the pace of Marquez.

The #42 Suzuki Ecstar entry was more than three seconds adrift of the lead when Rins lost the front end at Turn 11 on Lap 19, his second crash in as many races.

Crutchlow did not take long to pass Miller’s Pramac Ducati and then caught up to Viñales by Lap 9.

The Brit tailed the Spaniard until he nearly had a spill on the penultimate lap, which prompted him to give up the chase and bring the Castrol LCR Honda safely home in third.

Marquez, meanwhile, got almost seven seconds up the road before he eased off on the final lap, taking the chequered flag with his arms crossed in appropriately nonchalant fashion.

His team-mate Andrea Dovizioso took fifth, Miller sixth, and Mir seventh, the latter fading towards the end after looking like he might end up at the head of that pack.

Valentino Rossi (Monster Energy Yamaha) had a watching brief as he finished eighth, ahead of Franco Morbidelli (Petronas SRT Yamaha) and Stefan Bradl, who stood in for Jorge Lorenzo on the second Repsol Honda entry.

Quartararo crashed out on Lap 2 while trying to reclaim sixth position from Petrucci, with Aleix Espargaro (Gresini Aprilia) and Johann Zarco (Red Bull KTM Factory) also failing to make the finish due to falls.

Marquez’s championship lead over Dovizioso is 58 points heading into the summer break, which concludes with Round 10 in the Czech Republic on August 2-4.