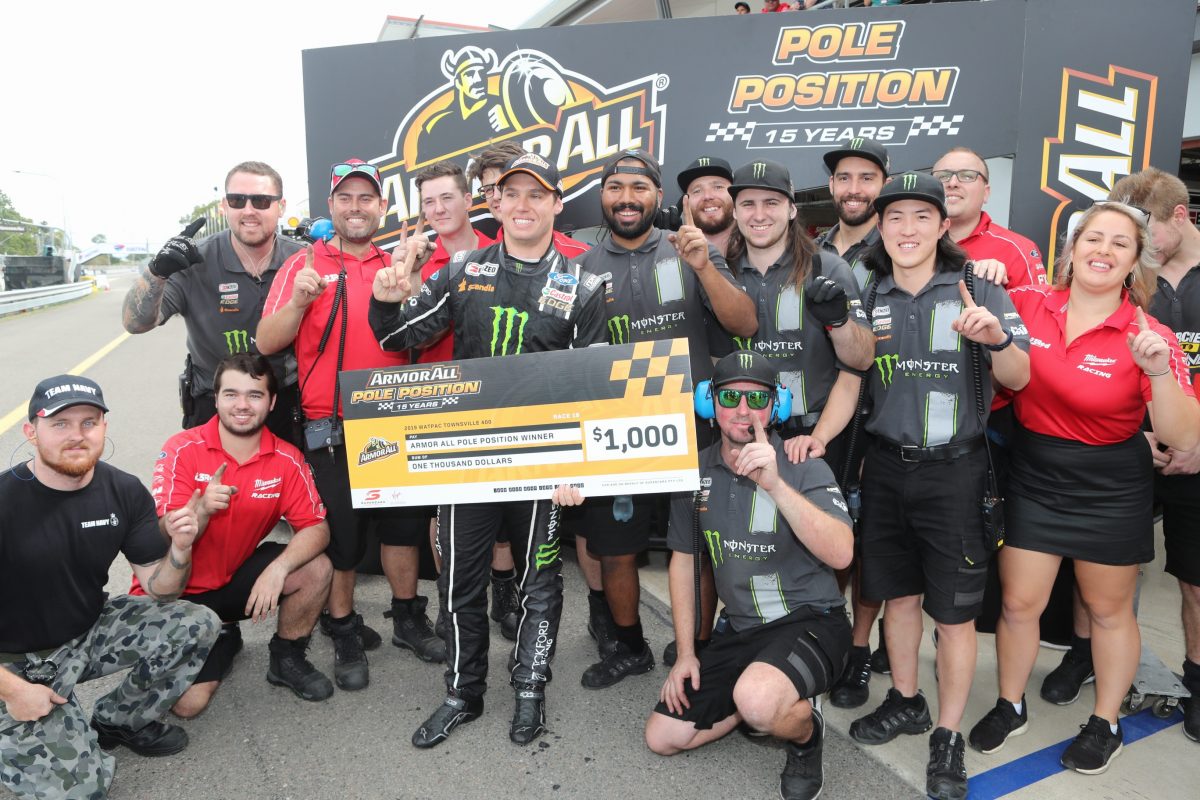 Cameron Waters has pipped Scott McLaughlin to Armor All Pole Position for Race 18 at the Watpac Townsville 400 by 0.0159s.

Waters provisionally qualified fifth but his 1:12.4869s would not be beaten by the four drivers who followed, although McLaughlin got close.

The provisional pole-sitter was no more than a few hundredths away from Waters at all three timing points in his #17 Shell V-Power Mustang and still more than a tenth faster than third placed qualifier David Reynolds.

Waters’ was a tidy lap which looked the goods given that he had taken the #6 Monster Energy Mustang to a best lap of just over a tenth quicker in the earlier qualifying session.

It is the first time he will start from first position since qualifying was washed out at Pukekohe in late 2017, and comes after he copped a penalty on his way to 21st in Race 17 a day prior.

“All the boys around me during the lap, I told them all to shut up, don’t jinx it,” said Waters.

“Absolutely pumped to get pole; yesterday was a day to forget and we really turned the car on its head for today and its really, really good. Pumped.

“It was a good lap. There was a little bit in it at Turn 3 but the rest of the lap was pretty clean. These top 10 laps are all about doing a clean lap; managed to get one and it was good enough.”

McLaughlin believed he had more time in him but was not too disappointed.

“You have a good run and everyone thinks you can do it, but we’re human and that lap by Cam was impressive,” said the championship leader.

“Kicking myself a little bit, I was a bit soft into Turn 1 there so I probably lost a bit of time there where I could have gained it. It’s alright.

Reynolds (#9 Penrite ZB Commodore) was second-last onto the circuit and beat Waters by almost two tenths to the first sector but had a ragged run through the second sector which he attributed to dirt on the track, ultimately stopping the clocks at 1:12.6240s.

Todd Hazelwood was less than a hundredth slower than Waters to the first sector and while his pace drifted somewhat in the next two, the second-year driver still bettered the earlier laps from Fabian Coulthard and Shane van Gisbergen.

The fourth position is a personal best for the Matt Stone Racing driver, and his #35 ZB Commodore was also the fastest Triple Eight-built car at 1:12.7605s.

Coulthard was in fact the biggest mover after Waters, provisionally qualifying eighth but ending up fifth with a 1:12.8599s in the #333 DJR Team Penske Mustang.

Anton De Pasquale (#99 Erebus ZB Commodore) dropped net one position to seventh, while Lee Holdsworth (#5 The Bottle-O Mustang) and Tim Slade (#14 Freightliner ZB Commodore) each moved up one to eighth and ninth, respectively.

That was because James Courtney (#22 Mobil 1 Mega ZB Commodore) used the last of his new tyres to make the shootout, before brushing the wall exiting Turn 3 on his way to a 1:13.2260s.

Race 18 of the Virgin Australia Supercars Championship, another 70-lapper, starts at 1510 local time/AEST.