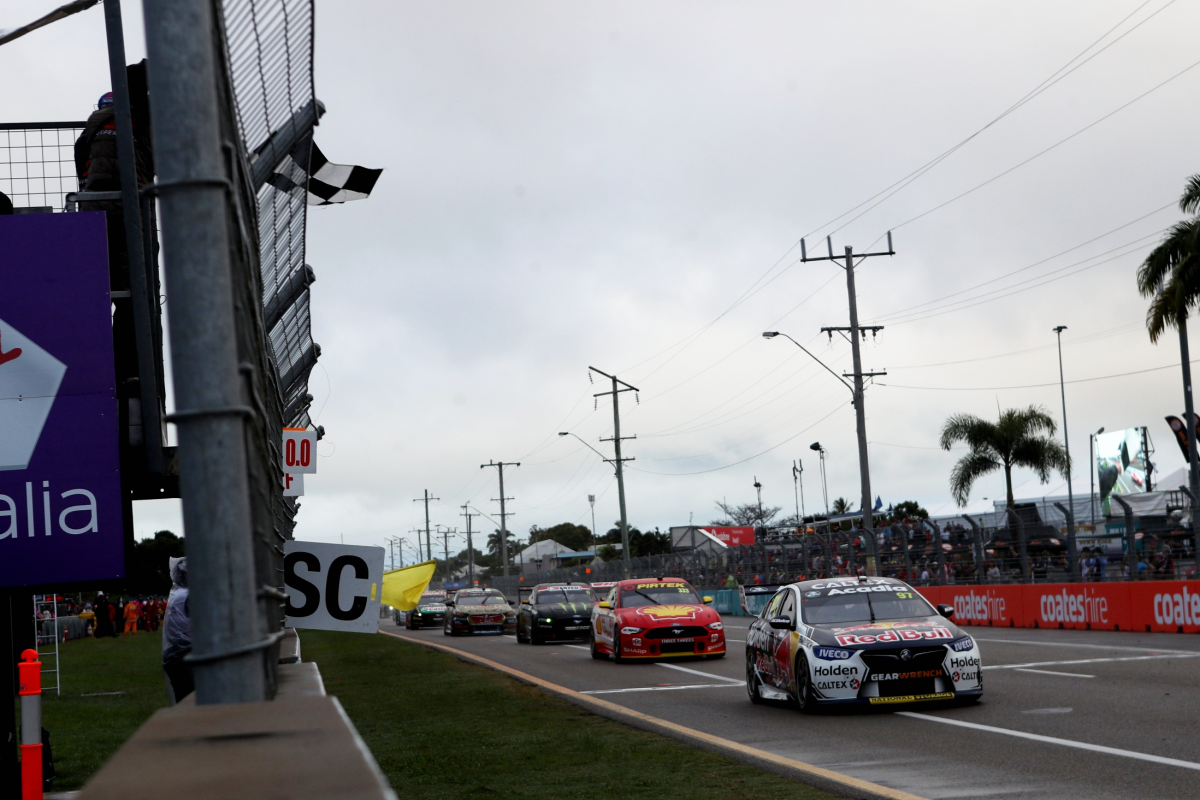 Shane van Gisbergen has won Race 18 of the Virgin Australia Supercars Championship under Safety Car after rain caused chaos on the streets of Townsville.

The #97 Red Bull HRT ZB Commodore led the #333 Shell V-Power Mustang of Fabian Coulthard and the #6 Monster Energy Mustang of Cameron Waters across the finish line.

Anton De Pasquale (#99 Penrite ZB Commodore) took fourth after leading for almost half the race having been one of the first onto wet tyres while championship leader Scott McLaughlin (#17 DJR Team Penske Mustang) came back from a lap down to finish 11th after copping a puncture in a second-corner clash with David Reynolds.

Jamie Whincup failed to finish due to a crash, while there were fires in two cars and the Brad Jones Racing pit bay near the end of the race which lasted 64 of the scheduled 70 laps.

With the track wet and all cars on slicks, the first two rows walked their cars away well at the start as Armor All Pole-sitter Waters led McLaughlin, Reynolds, and Todd Hazelwood.

Reynolds rode up on McLaughlin’s right-rear corner as they braked for Turn 2, breaking the left-front steering arm on the former’s #9 Erebus ZB Commodore, with race control soon advising that no further action would be taken.

Waters was 2.8s up on second placed Hazelwood at the end of the standing lap but the Matt Stone Racing driver would quickly fall down the order.

Coulthard passed Hazelwood (#35 ZB Commodore) on Lap 2 but continued to lose time to Waters, with the lead peaking at well over five seconds, while McLaughlin circulated at the back having taken new slicks.

Whincup appeared as though he might have been getting held up by van Gisbergen when he pitted at the end of Lap 16, taking another set of slicks, while Coulthard had reeled Waters in and jumped him when they both pitted on Lap 18.

On the next lap, Whincup lost the rear of the #88 Triple Eight ZB Commodore at Turn 6 and clouted the inside wall, drawing a Safety Car when he stopped on-track due to low oil pressure.

The Safety Car ensured the completion of the first pit stop cycle, and Coulthard led Waters, van Gisbergen, Mostert, Nick Percat (#8 Elite Roads ZB Commodore), and Lee Holdsworth (#5 The Bottle-O Mustang), while De Pasquale was 16th having gone onto wets and McLaughlin second on-track but a lap down due to sinking almost 100 litres of fuel.

The race restarted on Lap 26 and van Gisbergen was passed by Mostert and Percat as they crossed Boundary Street, then by Holdsworth at Turn 11.

With rain getting heavy, van Gisbergen went to wets on Lap 29, while Waters passed Coulthard for the lead on Lap 30 before they both pitted, along with Percat, at the end of the lap.

After the front-runners had pitted for wets, De Pasquale had assumed a lead of about 35 seconds from Waters and van Gisbergen, who had passed Coulthard on Lap 32.

Coulthard was fourth from Mostert, and Percat, with about half the race to go.

Of those aforementioned six, the 120-litre fuel requirement had been met by Waters, van Gisbergen, and Coulthard only.

De Pasquale’s lead dropped under 20 seconds when he made errors and ran long at Turn 2 and then at Turn 11 in quick succession, while Waters fell from second to fourth when he threw his car up the road at Turn 2 on Lap 36.

Mostert was on something of a march but still had to pit again, and he was running second to De Pasquale by about four seconds, and ahead of third placed van Gisbergen by about six seconds, when he pitted at the end of Lap 60.

The Safety Car was called on Lap 61 when Garry Jacobson parked the #3 Rabble.Club Altima at Turn 10, prompting De Pasquale to pit.

Car #99 initially slotted into the train in fifth position, behind van Gisbergen, Coulthard, Waters, and Mostert, before Race Control advised that De Pasquale and Mostert should swap positions due to their position when De Pasquale exited pit lane.

Percat, who had been on for a strong result before he punted Waters at Turn 3 on Lap 54, was in the lane when his fuel hose broke.

He carried a fire to pit exit before parking as rival crews helped put out that blaze, while another broke out in the fuel spilt in the BJR pit bay.

Meanwhile, replays revealed that Jacobson’s Altima had also been on fire when he pulled over to cause the Safety Car.

Time-certainty meant that the race would finish under Safety Car, and so it would be that van Gisbergen’s move on Coulthard on Lap 32 would prove to be the race winning pass.

“It’s been a tough, tough year for us and we’re getting better, but that one wasn’t me for sure, that was Shippy (engineer Grant McPherson) and the boys there,” said van Gisbergen.

“I was really struggling to keep my head when we didn’t have the grip and they kept it under control and kept me focused to the end. That’s a real team victory.”

Waters ended up on the podium despite being pushed up the runoff area by Percat, and Mostert made it two Tickford entries in the top five.

Reynolds did get classified as a finisher in 20th, four laps down.

McLaughlin’s championship lead is down to 292 points over team-mate Coulthard, while van Gisbergen has moved up to third at 207 points further back.

The next event is the Century Batteries Ipswich SuperSprint at Queensland Raceway on July 26-28.