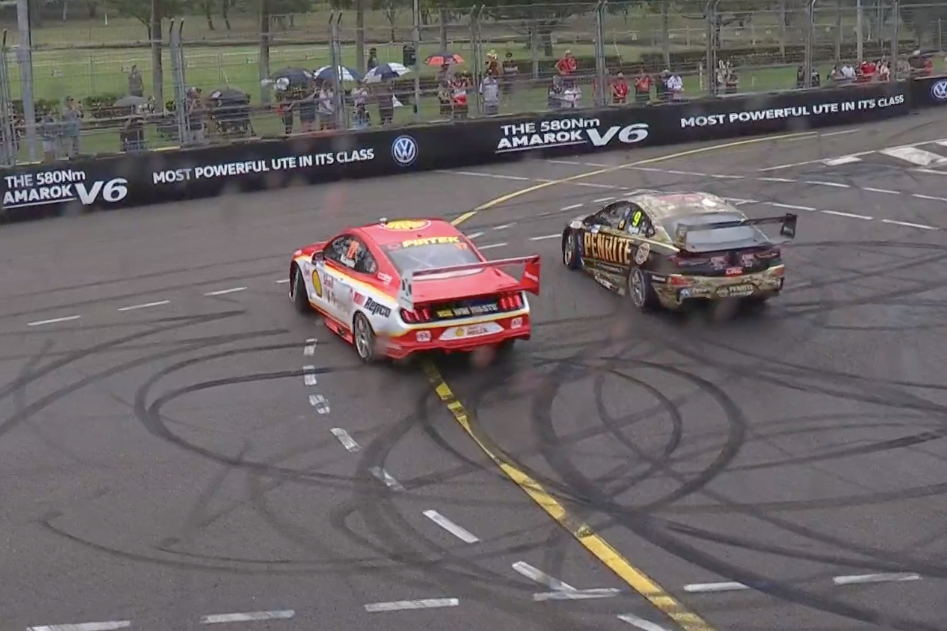 Scott McLaughlin believes that David Reynolds simply cannot accept blame for their first-lap clash in Townsville, which the championship leader denied was his fault.

The pair made contact on the run to the second corner in Race 18 of the Virgin Australia Supercars Championship when Reynolds attempted to challenge McLaughlin for second position.

McLaughlin sustained a puncture in the hit, which indirectly led to him going a lap down for a period of the race, while Reynolds broke a steering arm.

Reynolds claimed that McLaughlin moved right and was therefore at fault, suggesting that the Shell V-Power Racing driver needs to be “man enough” to deal with the contact which comes with hard racing.

McLaughlin, who labelled Reynolds a ‘desperado’ after the race, did not think he was at fault.

After one confrontation between the pair, McLaughlin retrieved footage of the incident which he showed to Reynolds when they met a second time in the Penrite Racing transporter.

McLaughlin believed that the vision proved that it was in fact Reynolds who caused the collision, an assertion which Reynolds denied.

“I didn’t really know how wet it was, so I just held back a little bit,” McLaughlin told Speedcafe.com.

“Dave obviously thought he could see a move down the inside but just didn’t give me enough room or I don’t know what the hell happened.

“I went down and saw him after the race believing that I had just held my line, he reckons I turned in, ‘go see the footage’.

“So I did, went back and brought the footage to him and basically said ‘This is what happened, I don’t feel I turned in, just want to ask for some sort of explanation’.

“I explained my position and just was disappointed because obviously it’s just hard to… some people always think they’re right and some people can accept the blame.

“Certainly, it wasn’t him today.

“He still reckons that we were racing and those things happen. Yeah, absolutely, but it’s also… at the end of the day, we recovered and he didn’t, so he ruined his own race more than anyone else.”

Despite the disagreement, McLaughlin claims that he has no particular rivalry with Reynolds.

“I don’t have a rivalry with him,” he added.

“I race everyone how they are; it’s just what it is.

“I went down to ask him, he told me to go look at footage and then come back, so I did. And then he had no response. I have nothing for it.”

McLaughlin initially ended up last of those still running, aside from the Reynolds car which was being repaired in the garage, and dropped off the lead lap when he took a fuel fill of nearly 100 litres under the first Safety Car period.

He did not get that lap back until Lap 57, at which time he was still 14th, and was eventually classified in 11th position, while Reynolds took 20th.

The 26-year-old leads the championship by a reduced, 292-point margin over team-mate Fabian Coulthard, who finished the race in second position.

“Shows how fast our car was,” reasoned McLaughlin.

“We had a couple of mishaps in the pits as well. I think I nearly went off on the slicks too; all in all, pretty good recovery.

“Our car had really good pace, I’m proud of the guys for that. Fabs got a podium, overall good day.

“Again, just disappointing, but I guess that’s what you build up the big gaps for, in case you have days like today, which might happen again, so we just got to keep our heads down, keep focused.

“I’m still nearly a round ahead (in the standings). Compared to the guy who was in the incident with me, I’m in a lot better position than he is post-race.”