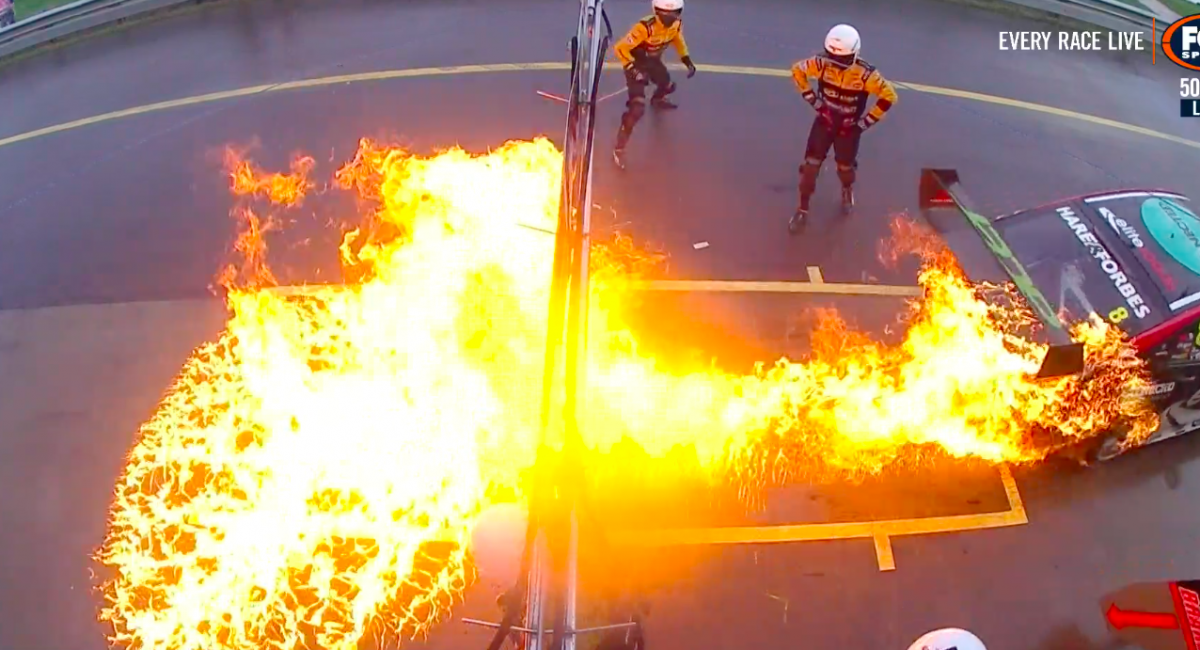 Brad Jones has sung the praises of rival crews after several jumped to his team’s assistance when fires broke out in one of its cars and pit boxes in Townsville.

Nick Percat had to pit under what was ultimately the Safety Car which ended Race 18 in order to make the minimum 120-litre fuel fill, at which time the hose appeared to rupture.

As Percat drove off, the fluid spilt in the pit bay ignited, as did the rear of the #8 ZB Commodore.

Crew members from Walkinshaw Andretti United, which is adjacent to Brad Jones Racing in the pits, helped to put out the pit bay fire.

At the top end of the lane, DJR Team Penske and Triple Eight Race Engineering staff, including the latter’s team manager, Mark Dutton, attended to the car when Percat stopped near pit exit.

“I think it’s one of the great things about Supercars I guess,” Jones told Speedcafe.com.

“Everyone’s extremely helpful and I saw the Walkinshaw guys and the Team CoolDrive team (BJR third entry) got their extinguisher but at that point I was heading in the opposite direction to the fire.”

The blaze appeared to arise due to a breakage or disconnection of the hose itself from the Siamese coupling, which caused fuel to pour onto the ground and the back of Percat’s car.

Jones was unsure exactly how the drama started, but also had praise for his own crew for how they reacted.

“I was standing right next to the refuelling tower and I thought, as far as fires go, our guys handled it really, really well,” he said.

“We got rid of the people fast, it just… I thought it was as well executed as it could be within our garage.

“I thought it was such a terrible thing but I felt like we handled it the very best we could.”

Percat revealed that he took his cue to exit his car when he felt his driver’s seat getting hot.

“I obviously saw the fire as I left (but) I didn’t know how it’d happened so I was couldn’t really see if my car was on fire,” he told Speedcafe.com.

“As I got further down pit lane, the whole underside must have been on fire as the seat got real hot, so that’s why I ejected out. And turns out it was on fire.”

The mess finally put paid to Percat’s chances of a strong result.

He had run in the top six for most of the latter half of the race and while he still needed to pit again at that point in time, so did most of those who followed, as well as then-race leader Anton De Pasquale.

However, Percat locked up and pushed Cameron Waters into the Turn 3 run-off on Lap 54, for which he was issued a 15-second time penalty to be served either at his next pit stop or, if taken under Safety Car, added to his race time instead.

Despite the fire, he managed to finish the race and, having taken the chequered flag as the last car one lap down, remained in 19th position when his race time was adjusted.

Waters, who had already made an error of his own which cost him the effective lead, finished third.

“That was actually a really fun battle,” said Percat of his regular duels with Waters.

“It was cool to race him like that; that was just my mistake, I just grabbed the white line on the left side as I braked and locked the left front and unfortunately drilled the back of him.

“Thank god he’s still on the podium; I would have felt really bad because obviously I knew the position we were in.

“If Waters finished third off the back of me wiping out, I would say (I could have finished) somewhere in the top five.

“But obviously we had to do that fuel drop, so that’s another separate issue again.”

Percat also lamented the horror show which unfolded for BJR with his other two team-mates, Tim Slade and Macauley Jones, also incurring penalties for driving infringements.

“This wasn’t just one of those days as a team,” he observed.

“Me and Sladey have had driving penalties, I think Macca might have got one, I caught fire, fuel drops… it’s just not gone well.”