Fabian Coulthard has reflected on a 15-year journey of highs and lows to reach his Supercars ‘happy place’ as he prepares for his 400th race start today at the Watpac Townsville 400.

The milestone has been described as ‘pretty crazy’ by the New Zealander who states that he has ‘been around longer than some race teams’, and arrives just days after confirmation of a new deal to stay at Shell V-Power Racing for 2020.

“It’s a bit of both (worrying and enjoyable to reach 400 races),” Coulthard told Speedcafe.com.

“It’s not a stat I’ve tracked, but I’ve been around in Supercars more than some race teams so it’s a pretty crazy milestone. “I’ve driven for a lot of teams, I’ve finally established myself here with DJR Team Penske.

“You always want to align yourself with a team and a car that can give you the results, and I think we’ve seen this year that I’ve certainly found a happy place and just loving going racing.”

It is his rise through the ranks from making his category debut in 2004, when he drove for Tasman Motorsport in a one-off round at Oran Park, to racing for the DJR Team Penske powerhouse which he is most proud of.

However, this journey has not been plain sailing.

After his debut, Coulthard went on to drive the enduros with Jason Richards in 2004 before rejoining Tasman for next year’s endurance campaign.

Drives at Paul Morris Motorsport followed in 2006 and 2007 but the latter saw the Kiwi fail to complete the season after being dropped after the enduros.

It wasn’t until 2008 when he joined Paul Cruickshank that Coulthard notched up his first full season and it was at the team where he scored his first podium in 2009 at Symmons Plains.

A move to Walkinshaw Racing beckoned but it was after he lost his seat to Russell Ingall that his career gained traction at Brad Jones Racing, where he scored a maiden win at Symmons Plains in 2013 on his way to sixth in the championship.

Four successful seasons eventually prompted a move to DJR Team Penske in 2016, where Coulthard has now emerged as a regular race winner and a title contender in 2017.

“I think there have been lots of highlights. Me getting myself to where I am today, driving for this team, that’s the end goal; to drive for a top level team, the best team, that can give you the best opportunity to win races,” said Coulthard. 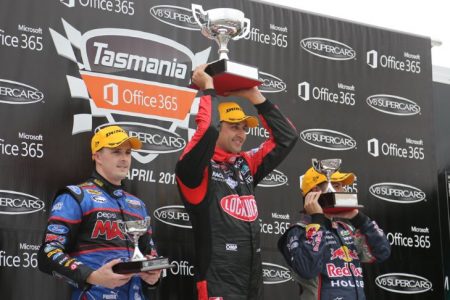 Coulthard celebrates his first Supercars win at Symmons Plains in 2013

“But (that is) not forgetting that all the teams that I’ve driven for, up until this point, have played an incremental part in me getting to where I am, so I can’t thank those people enough.

“I drove my first Supercar with Tasman back in ’04, just did a one-off race, and then drove the enduros with JR (Jason Richards), which was awesome, he was a family friend of ours and a great mate, so that was pretty special.

“But then progressing through there’s been times where I’ve been moved on to other teams through whatever reason – Russell Ingall shuffled me along twice, once at Morris’, once at Walkinshaw Racing with a whole heap of money – and then you’re like, ‘Well, what do you do?’

“You sit there and you go, ‘Well there’s the potential that I may not be racing next year,’ but thankfully, for whatever reason, my skills and ability have then shown who I’ve driven for next that I’m worthy of a drive.

“I’m thankful for those people that had the belief, Brad Jones especially.

“After the Walkinshaw years, he took me on, and they were probably some of my best years in Supercars before coming to Shell V-Power Racing, so everyone’s played a key role and it’s been pretty incremental.”

Coulthard admits that it is not easy to endure such a period of time in one of the toughest national series in the world with both challenges on and off the track.

“It’s looks very easy for the outside, there’s a lot of people that sit behind their keyboard and say how easy it is to drive a Supercar but you look along this field, there’s 24 of us in it this year, and the field spread’s only covered by eight tenths of a second, so it’s the most competitive championship in the world,” he added.

“If we as a team don’t do everything right then it reflects poorly on the driver, but it’s a team sport, it’s a team effort, we all have to put in a hundred percent to get the outcome and the results that we’re after, and this year we’re doing that.

“But for those people that knock you back and say that you’re no good and that you don’t deserve what you’ve got and things like that, that’s a motivator for me. I turn a negative into a positive and let my results speak for themselves on the track.” After a difficult 2018 campaign that saw Coulthard struggle for pace and play second fiddle to title contender Scott McLaughlin, the 36-year-old says his time at DJR Team Penske has been among his happiest.

This season he has returned to form in a Shell V-Power Racing Mustang, sitting second in the standings.

“People have a short memory; 2017, we were in the hunt, right up until the end, and what happened in New Zealand sort of ruined any chances of getting that dream of a championship, but last year I knew I just had to get through,” he recalled.

“Our focus changed – it’s been well-documented – midway through last year that the focus was turning to (Car) 17 and getting this team a drivers’ championship; we won the teams’ championship the year before so, as a team, we wanted to tick that box, and I did my role of helping Scotty (McLaughlin) out the best I could and that was that.

“But I think now you’ve seen (in) the first half of the year that Fabian hasn’t forgotten what to do, Fabian can still drive, and the results speak for themselves.”