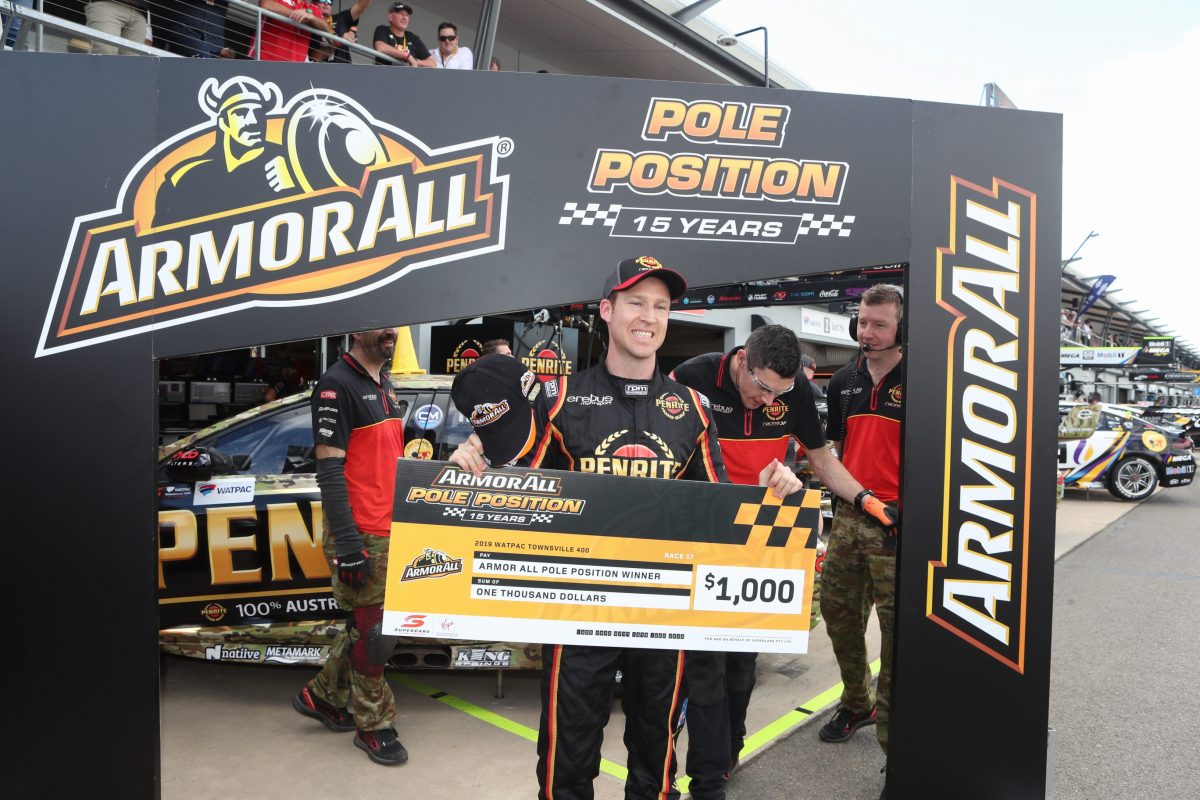 David Reynolds has taken a first Armor All Pole Position of 2019 by beating Chaz Mostert in Qualifying for Race 17 at the Watpac Townsville 400.

Reynolds set a 1:12.1060s with the chequered flag out in the #9 Penrite Racing ZB Commodore, going 0.1128s faster than the #55 Supercheap Auto Mustang of Mostert.

Championship leader Scott McLaughlin will start off Row 2 alongside Shane van Gisbergen, and Will Davison inside of Jamie Whincup just behind them.

Fabian Coulthard, who was fastest in the day’s earlier practice session, locked up during his first run on new tyres and could only improve to 13th position at the end of the 20-minute session.

McLaughlin was fastest ahead of the final runs but Mostert and Reynolds were each within a tenth of a second of the #17 Shell V-Power Mustang’s pace in second and third respectively.

The Kiwi failed to improve on his 1:12.3015s at the end, but Mostert found a tenth of a second and Reynolds almost three tenths.

“I’m so happy, I’m so proud of everyone,” said Reynolds.

“The funny thing is, I had no radio that last lap, so I had no idea.

“I saw that, I was like it was a pretty good time across the line, that’s alright, I had no idea, and then I got halfway around and saw ‘pole position: Dave Reynolds’.

“I’m just really proud of the boys because in Practice 3 I hit the fence and made them work a bit harder. Repaying them back.”

Mostert was also proud after the rain and an engine problem meant he had little meaningful running in Friday practice.

“This year has been super tough for one-lap pace; can honestly put my hand on my heart and say that’s the best qualifying car I’ve had all year.

“A lot’s changed for us this weekend, Friday running absolutely killed us. Stuck to our guns, we’ve done our research.

“I’m just super pumped for Adam (De Borre, engineer), he’s done a lot of hard work; he deserves the pole because of how much he’s changed on the car. Hopefully it’s still a good race car.”

Van Gisbergen was 0.2179s off the pace in the #97 Red Bull HRT ZB Commodore and Will Davison barely a hundredth of a second slower in the #23 Milwaukee Mustang.

Whincup (#88 Triple Eight ZB Commodore) and Lee Holdsworth (#5 The Bottle-O Mustang) were both within three tenths of the pole time in sixth and seventh respectively.

Coulthard was as low as 17th before improving by a bit over a quarter of a second as he set a 1:12.5761s in the #333 DJR Team Penske Mustang, still almost three tenths slower than he went in Practice 3.

“Bit of a shame when you can’t match your Practice 3 time,” he lamented.

“Yeah, pretty disappointed; I had a braking drama into (Turn) 1, I locked the right-front, had to come out of the brake, get back into the brake and missed the apex on my first set of (new) tyres and then wasn’t much better on my second set.

“It’s the way it goes; obviously we’ve got to get a good strategy and get ourselves back in the hunt.”

The Armor All Pole Position for Reynolds is Holden’s third of the season, with the others to van Gisbergen and Winterbottom at Symmons Plains.

Race 17 of the Virgin Australia Supercars Championship, to be run over 70 laps, starts today at 1510 local time/AEST.

Results: Armor All Qualifying for Race 17