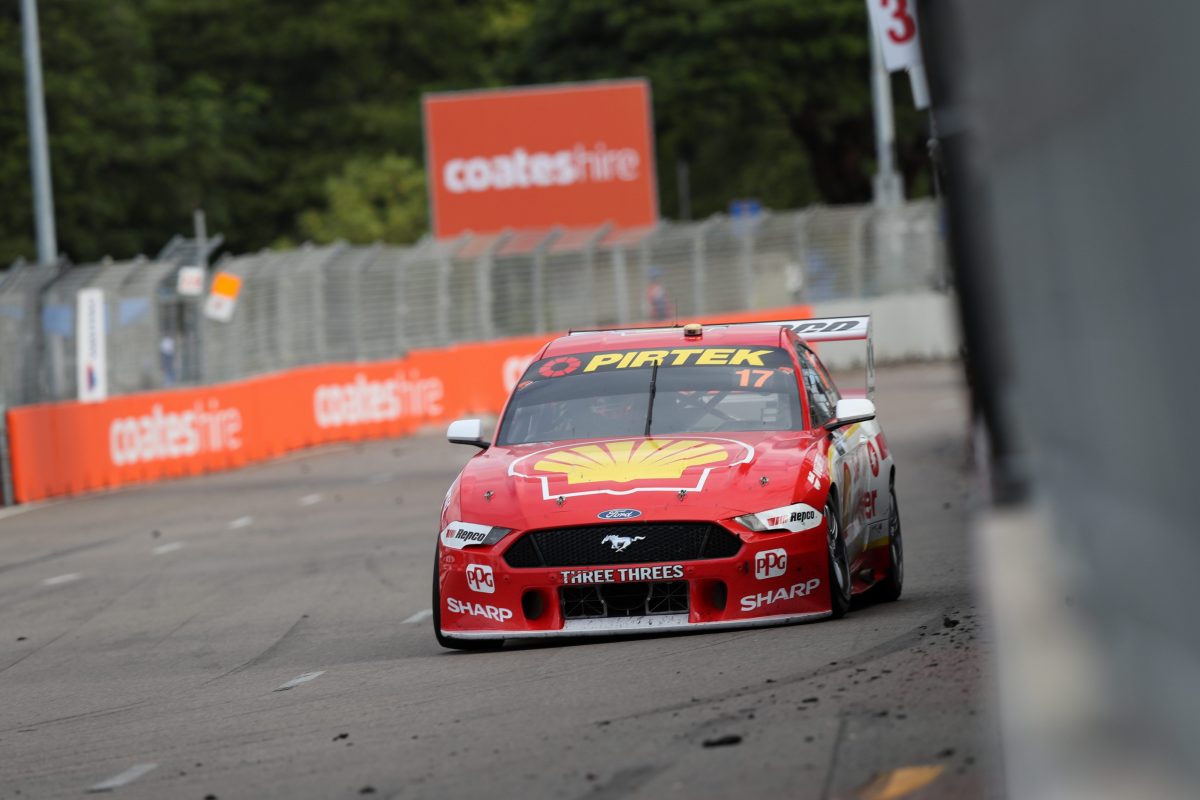 The Red Bull Holden Racing Team did its best to thwart McLaughlin and Reynolds by bringing Whincup into the lane early in each stint.

Pit stop problems took Reynolds out of contention before he could fight for victory in the final stint, while Whincup could do little to disrupt McLaughlin when the #17 Shell V-Power Mustang ranged up on him just after their second pit stops.

Whincup saw off pressure from Mostert with around 15 laps remaining and brought the #88 ZB Commodore home in second position, 4.7025s behind McLaughlin.

Mostert was another 2.6546s further back in the #55 Supercheap Auto Mustang, while Shane van Gisbergen put a late-race move on Reynolds and then an even later one on Fabian Coulthard to finish fourth.

Coulthard brought the second DJR Team Penske entry up from 13th on the grid to fifth, while Reynolds ended up sixth when at least a podium beckoned.

McLaughlin had made the best start of the top three but had nowhere to go when Armor All Pole-sitter Reynolds (#9 Penrite ZB Commodore) and Mostert moved across each other.

The Mustangs briefly fought over second position before Mostert cleared McLaughlin into Turn 3, at which point he challenged Reynolds on the outside but had to tuck back into file.

Van Gisbergen had gone to the outside of McLaughlin and Will Davison (#23 Milwaukee Mustang) at the second corner but ran wide and ceded fifth position to team-mate Jamie Whincup.

The Kiwi dived back down the inside of Whincup before the lap was out, at Turn 11, and compatriot Andre Heimgartner (#7 Plus Fitness Altima) followed him past.

They were still trying to sort themselves out when Cameron Waters (#6 Monster Energy Mustang) gave Whincup a hit in the rear as they started braking for Turn 2, which caused Whincup to cannon into Heimgartner.

Both somehow gathered up their cars but Heimgartner dropped to ninth, behind Waters and Mark Winterbottom (#18 Irwin Tools ZB Commodore).

Van Gisbergen soon reported a steering vibration in the #97 ZB Commodore which Whincup correctly diagnosed from his own seat as a buckled rim.

As they pressed on just behind fourth placed Davison, Mostert closed in on Reynolds before dropping back off the back of the Erebus entry and instead falling into the clutches of McLaughlin.

The championship leader had a lunge at Mostert at Turn 3 on Lap 17 but the Tickford driver fought back on exit, setting off a great battle between the Mustangs.

Mostert prevailed on the exit of Turn 6 but van Gisbergen took the opportunity to nab fourth from Davison at Turn 10.

Reynolds’ lead ballooned from just under three seconds to around 5.5s as that was going on, and grew by another second by the time McLaughlin did indeed pass Mostert at Turn 3 on Lap 19.

Van Gisbergen got by the #55 Mustang through Turn 12 on the same lap to take up third position.

Meanwhile, Whincup had been into the pit lane at the end of Lap 16 and took on 42 litres of fuel, allowing him to undercut those in front.

McLaughlin pitted at the end of Lap 21 and Reynolds a lap later, while van Gisbergen was leading when he stopped another lap later again.

When the cycle shook out at the end of Lap 25, it was Whincup with almost five seconds on Reynolds, from McLaughlin, Mostert, Davison, and Fabian Coulthard, who had started 13th in the #333 Mustang.

With the first stint pace having gone out of Car #9, Reynolds was picked off by McLaughlin on Charters Towers Road on Lap 31, at which time Whincup was a touch over five seconds up the road.

Van Gisbergen passed Percat and then a slightly off-sequence Courtney on the road, while Whincup’s lead had been whittled down to less than two seconds when he pitted a final time at the end of Lap 38.

Reynolds pitted from second position and about seven seconds behind McLaughlin at the end of Lap 43, but lost around half a dozen seconds in the pits when his left-rear wheel man had to change the wheel nut in the tyre which was to go on that corner of the car.

McLaughlin pitted a lap later and rejoined about 2.5s back from Whincup, but he ran down Car #88 and made a relatively straightforward pass at Turn 13 on Lap 49.

From there he pulled away and it appeared that Mostert would also get by Whincup, but he could not do so.

“Me and Chaz had a good battle there, it cost us a lot of time so I was sort of trying to make up the whole race,” said McLaughlin.

Whincup hailed the Triple Eight strategy but conceded he did not have the car pace of McLaughlin.

“I’m really proud of the crew today,” he said.

“We were really aggressive on strategy; you’ve got to be careful doing that because you can hurt yourself trying to race (Car) 17 to the rest of the field.

“They were aggressive, come in early, we put pressure on those guys. Strategy was excellent, the only better strategy is a faster car, that’s the best strategy.

“We’re being real aggressive with set-up trying to catch these guys; we’ve made a step sideways, which I’m happy with and hopefully we can find a bit more gold in the pond we’re fishing in at the moment.”

Van Gisbergen was seventh after he was last to pit a second time at the end of Lap 52, but got Davison and then Reynolds at Turn 11 on Laps 59 and 65 respectively.

He gave Coulthard a touch through Turn 2 on the 70th and final lap but fanned the throttle on exit, before executing a textbook move into the third-last corner.

Davison ended up seventh after some stoushes along the way, the hairiest being when Tickford stablemate Mostert gave him a touch as they crossed Boundary Street on Lap 25 to take fifth position at the time.

Percat, Winterbottom, and Lee Holdsworth (#5 The Bottle-O Mustang) ran eighth through 10th respectively for the final stint, while Anton De Pasquale was 11th in the #99 Erebus ZB Commodore.

Heimgartner was first of the Nissans home in 12th, a spot ahead of Courtney, who was followed by Todd Hazelwood (#35 Matt Stone Racing ZB Commodore) and James Golding (#34 Boost Mobile ZB Commodore).

Waters ended up a lap off the pace and 21st after escaping sanction for the Lap 2 hit but copping a 15-second hold for unloading Rick Kelly (#100 Castrol Altima) when he arrived at Turn 2 on cold tyres after his first pit stop.

Kelly finished 17th, with the top 18 on the lead lap and all 24 cars finishing.

McLaughlin’s championship lead over Coulthard is now 358 points, with Reynolds another 149 further back in third.

Armor All Qualifying for Race 18 takes place tomorrow at 1035 local time/AEST, before the grid for the second race at the Watpac Townsville 400 is finalised with a Top 10 Shootout.