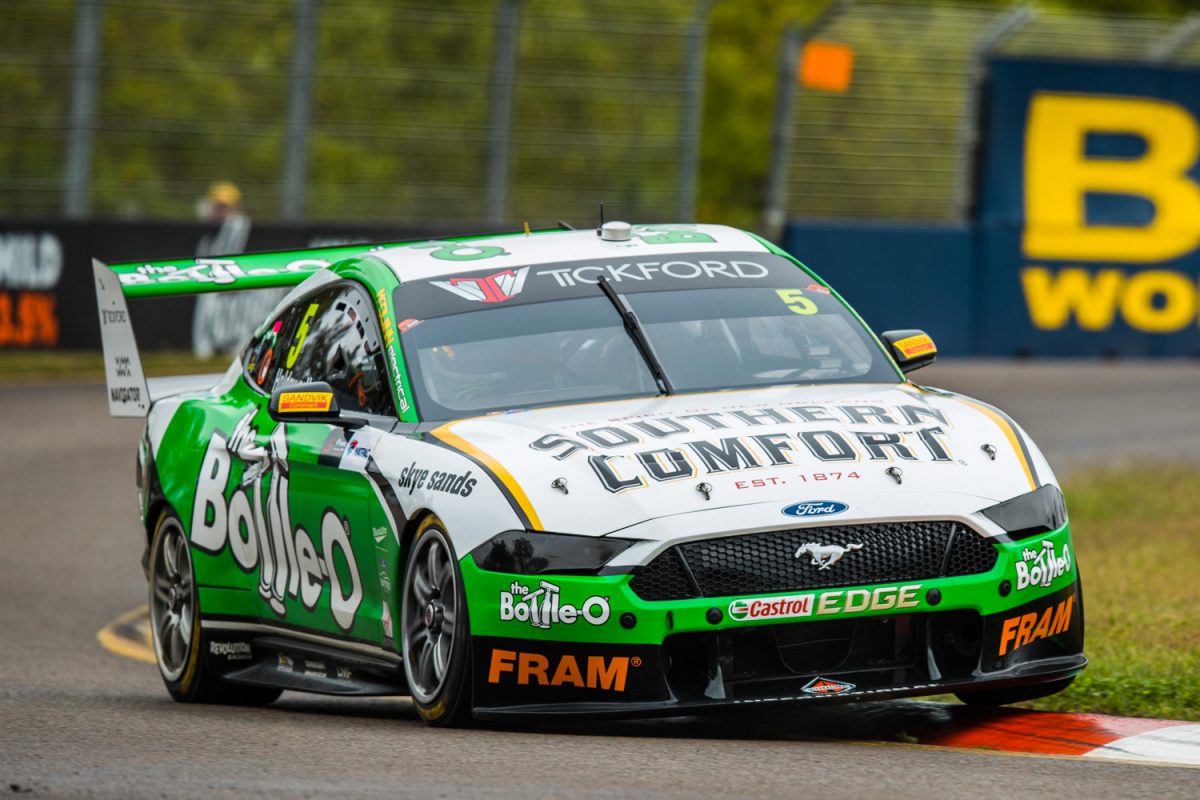 Lee Holdsworth says that he now has the confidence to push harder in his Tickford Mustang having finished fastest in Friday practice for the Watpac Townsville 400.

Holdsworth put the #5 Bottle-O entry on top of a congested timesheet in Practice 2 in Townsville, having been eighth after an early spin in a wet Practice 1.

He joined Tickford this year and has taken time to adjust to his new ride, but has gone from being regularly outdone by his three new team-mates to mixing with them as he has climbed to 10th in the championship.

Prior to the move to the Campbellfield outfit, Holdsworth had two seasons at Erebus Motorsport, into which Stone Brothers transformed in 2013, and then four at Team 18.

While he snared a race win at Erebus, at Winton in 2014, the six-year span was one largely of major frustration, leaving Holdsworth to muse that he had even forgotten how to find his way to a press conference.

“It’s good to be up here,” said the 36-year-old in the post-practice press conference.

“I didn’t know where to go, forgot that these rooms actually exist, so it’s good to be back.

“Fastest on the Friday, obviously it’s only practice, but I’m getting more and more comfortable in the car every time I get in it, so I’m able to push and around here you need really good confidence.

“In the first session we had all sorts of conditions, we were pretty quick in the wet, but then got experience in the dry as well.

“Track seemed to have fairly good grip, we obviously didn’t get to do too many changes, but here we are.

“Friday, we’ve got a good car and hopefully we can continue the form for the weekend.”

Having labelled a season-best race finish of fifth at Winton, two events ago, as “a big relief”, Holdsworth went on to record results of sixth and seventh in the two races at last month’s BetEasy Darwin Triple Crown.

He now believes that he is close to an optimal feeling with the Mustang, having had no prior experience with Tickford-run Fords at the start of the season, unlike his team-mates.

“(We are) chipping away at my car, for me, making it more comfortable,” he explained.

“When you’re more comfortable in the car you can push harder, so I’m happy with the balance at the moment.

“We’re sort of down to the point where it’s very, very fine tuning now.

“We’ve got four quick cars, that always helps, so hopefully we can all push each other, we can learn some stuff overnight and come back; we’ll have to come back quicker tomorrow because everyone’s going to push harder.”

A third half-hour practice session is scheduled for tomorrow at 0955 local time/AEST, before Armor All Qualifying for Race 17 of the Virgin Australia Supercars Championship at 1150.