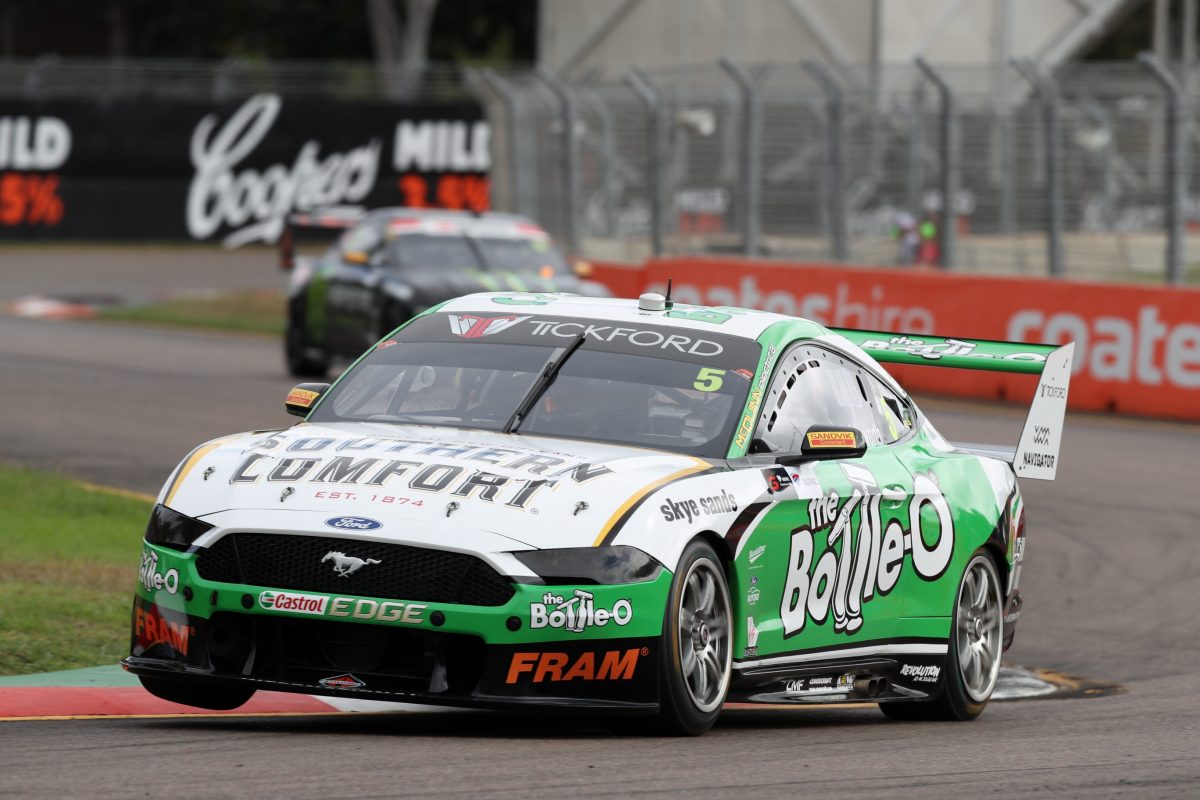 Lee Holdsworth was fastest of four drivers separated by less than a tenth of a second at the top of the Supercars Championship Practice 2 timesheets at Townsville.

The Tickford Racing driver reclaimed the mantle from Scott McLaughlin with the chequered flag out in the dry, 30-minute session before they were split by Shane van Gisbergen, relegating David Reynolds to fourth.

Holdsworth was 10th after the first runs in his #5 The Bottle-O Mustang and ninth after the second runs, before taking the lead for the first time on his fourth run with a 1:12.7657s.

That lap put him almost two tenths ahead of the championship leader before McLaughlin wheeled the #17 Shell V-Power Mustang to a 1:12.6974s in the final two minutes.

However, in his final run at the session, Holdsworth lowered the benchmark again, to a 1:12.6772s.

“It is (good) and especially around here, I love this track, I’ve always enjoyed it around here and it’s been 10 years now since my anniversary pole here which was my first one ever,” said Holdsworth.

“The Bottle-O car is really hooked up; obviously we didn’t get much of a chance to tune it today (due to the wet Practice 1), but we’ve rolled out of the box with a pretty quick beast. Let’s hope we’re in the same position tomorrow after qualifying.”

He did, however, note that he would have liked to have got more from his new tyre set.

“To be honest, I didn’t get the best out of the greens,” admitted Holdsworth.

“The previous set, they were an older set and I was only half a tenth, a tenth quicker on the green run.

Team-mate Waters then came up from outside the top 10 in the #6 Monster Energy Mustang, before van Gisbergen fired in a 1:12.6904s in the #97 Red Bull HRT ZB Commodore.

Anton De Pasquale was sixth at 0.2195s off the pace in the #99 ZB Commodore after both he and Erebus Racing team-mate Reynolds had sat out the rain-affected opening session.

“We would have liked to have made a small change for that last (tyre) set, but 30-minute sessions, it’s just go, go, go; didn’t quite get it in,” explained Coulthard.

“On the whole, pretty good. Both cars have rolled out pretty good. Learn a bit overnight and come back tomorrow.”

Will Davison had a spell at the top at the halfway mark before the #23 Milwaukee Mustang was shuffled back to 11th, while Rick Kelly was best of the Nissans in 13th in the #100 Castrol Altima at 0.5083s behind Holdsworth.

A position further back was Chaz Mostert, who effectively missed the first two thirds of the session due to a gremlin in the #55 Supercheap Auto Mustang, which Tickford seemed to have resolved by replacing the ECU and all ignition packs.

Jamie Whincup (#88 Triple Eight ZB Commodore) ended up 16th having missed out on a chance for one more flying lap by what he estimated to be about half a second.