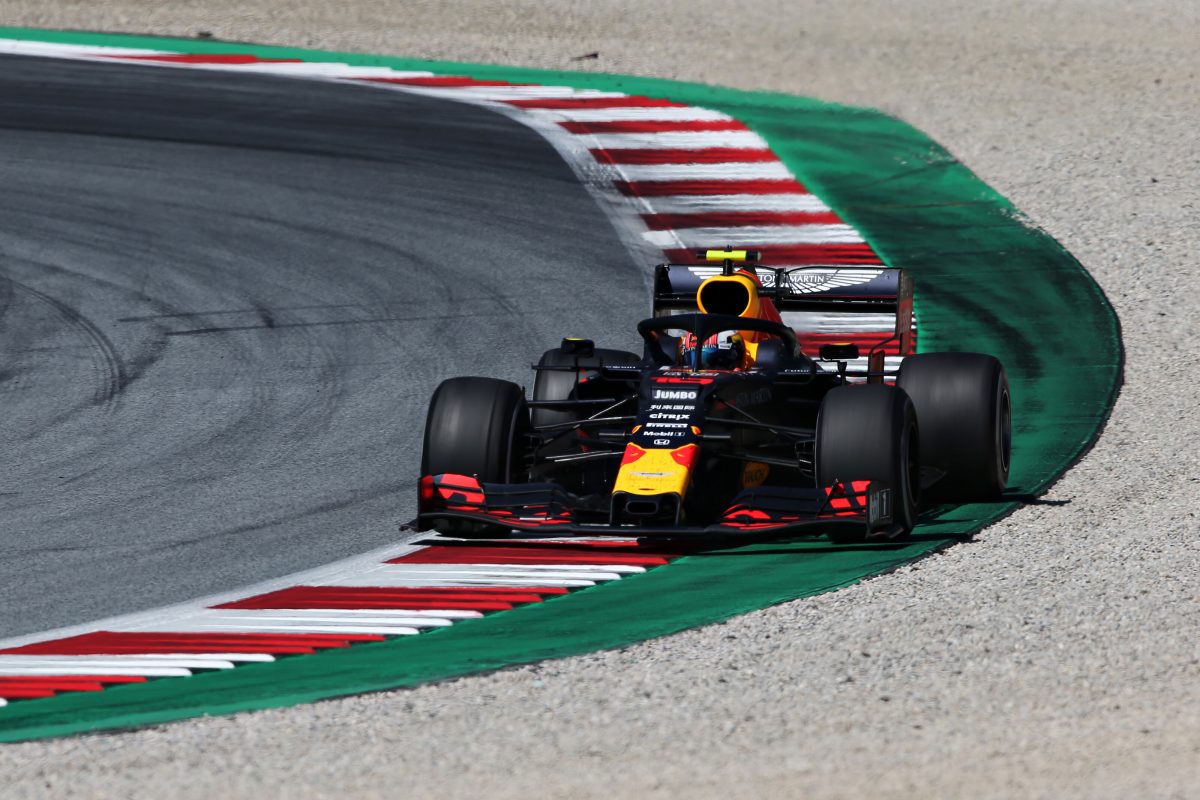 With only two laps to go, Verstappen dived down the inside of Leclerc at Turn 3, making wheel-to-wheel contact on exit which bumped the Ferrari wide.

Leclerc had led for much of the race but couldn’t hold the #33 Red Bull at bay when Verstappen caught him with around five laps remaining.

They took the chequered flag 2.7s apart, while Mercedes’ Valtteri Bottas was a distant third at the Red Bull Ring.

Verstappen dropped from the outside of the front row to seventh by the exit of the first corner after he fell into anti-stall mode when the lights went out.

The latter two swapped positions by Turn 4 due to a strong run up the hill from Hamilton, and Kimi Raikkonen (Alfa Romeo) also rounded up Norris, while Sebastian Vettel sat sixth having cleared Verstappen out of the first corner.

Vettel and Verstappen both got by Norris and then Raikkonen within the first 10 laps, and Vettel was catching Hamilton around the Lap 20 mark.

Bottas and Vettel pitted from second and fourth respectively on Lap 21, but the latter lost a few seconds due to his tyres not being ready.

Leclerc was into the lane a lap later, resuming third, while Hamilton had to take a new front wing when he stopped at the end of Lap 30, having repeatedly climbed the kerb at Turn 1.

Verstappen stretched his medium tyres to a 31-lap first stint and rejoined in fourth, behind Leclerc, Bottas, and Vettel, and in front of Hamilton, with all five onto the hard compound tyre.

With tyres 10 laps younger than his main rivals, Verstappen was able to storm through his second stint.

While Vettel ahead was turning up the wick up to close the gap to Bottas, Verstappen was doing the same on Vettel, getting within a second of the Ferrari driver as the front-runners approached lapped traffic.

It would only take a handful of laps for the Dutchman to make the pass, on the run to Turn 4 on Lap 50.

There was a brief scare when Verstappen reported a “power issue”, which turned out to be an exhaust sensor problem, and he got Bottas 15 laps to go.

The lap times tumbled as Verstappen reached DRS range on Leclerc with five of the 71 laps to go.

Leclerc repelled the Red Bull at Turn 3 on Laps 67 and 68, but Verstappen dived into the gap on Lap 69, precipitating contact on the way out of the corner.

Should he be found to have committed a driving infringement, the split at the finish would demote the Dutchman to second.

Vettel ultimately finished fourth with a two-stop strategy, returning to pit lane just after being passed by Verstappen to switch to the soft compound tyres in a bid to claim the fastest lap.

That move put him behind Hamilton, however, until Vettel passed Hamilton on the penultimate lap.

He quickly closed the gap to the other Mercedes of Bottas, but finished just behind with a wild run onto the main straight for the final time.

Norris finished a lap off the pace in sixth, from Pierre Gasly (Red Bull) and Carlos Sainz, the latter of whom started 19th and ran a long first stint in his McLaren.

Raikkonen and the second Alfa Romeo of Antonio Giovinazzi completed the top 10, a position ahead of Sergio Perez (Racing Point).

Daniel Ricciardo managed to sneak ahead of Renault team-mate Nico Hulkenberg on the final lap to claim 12th.

Ricciardo was the final driver to make his first stop in the race, holding onto the medium compound for 46 laps before finishing on the soft compound rubber.

Verstappen’s win, plus bonus point for fastest lap, sees him jump Vettel to third in the drivers’ championship, while Hamilton’s lead over Bottas is 31 points.

Round 10 is the British Grand Prix at Silverstone on July 12-14.