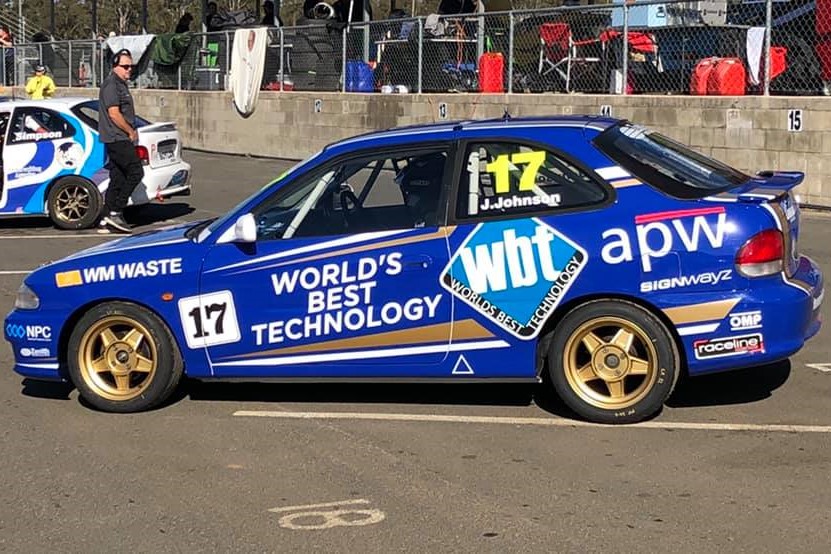 Jett Johnson, grandson of Dick and son of Steve, did not want his car racing debut in Series X3 Queensland over the weekend to end.

Johnson had his first competitive outing in the Hyundai Excel which Team Johnson bought late last year at Morgan Park as part of the CAMS QLD Circuit Racing State Championships.

“Wow, what an unbelievable weekend for my first ever race meeting, I’m certainly never going to forget it, I wish it had never ended,” wrote Johnson on social media.

“I had 2 more really fun races today (Sunday) where I learnt so much.

“I made some big improvements today in my driving (and dad made some demon tweaks to the car) and I improved my times by over a second again today. That makes a total improvement from Friday’s practice of around 4 seconds, putting me only 2 seconds off the top 3 pace.

“I qualified 20th and came 13th by the last race which well exceeded my expectations. Going into this weekend my goal was to stay on the lead lap, so to be as competitive as I was just blew me away.”

While not quite a full retro livery, Johnson’s Excel did mimic old Tru-Blu Falcon looks, complete with the traditional number typeface and gold wheels.

Jett is not the only next generation driver who has stepped into motorsport via Excels, with Nash Morris, son of Paul, contesting a round of the Queensland Excel Cup last month.

Virgin Australia Supercars Championship driver Tim Slade was also in action in a Hyundai normally raced by his father Gil in the Wynn’s Circuit Excel State Championships at The Bend on the weekend.