Gardner convinced luck has to change after crashing at Assen

Gardner convinced luck has to change after crashing at Assen 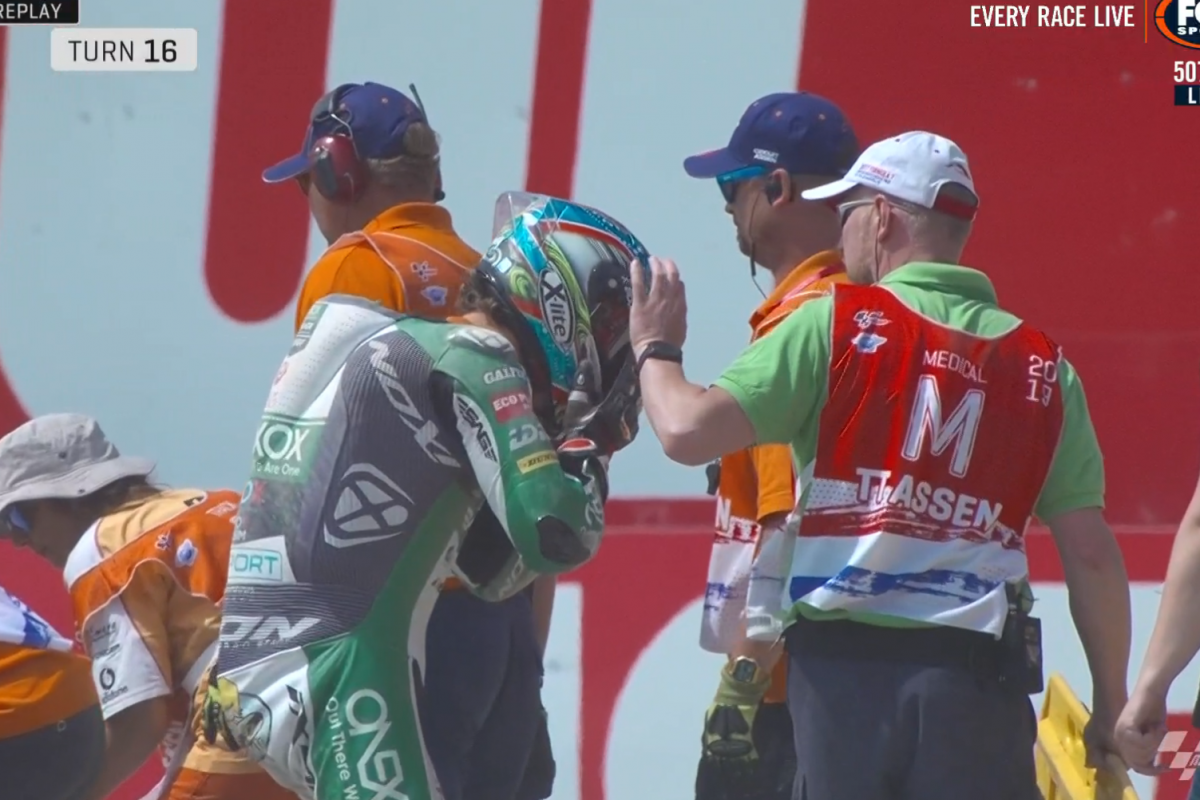 Remy Gardner is convinced that his luck “has to change” after he went from a maiden pole to crashing before half distance in the Assen Moto2 grand prix.

Gardner was competitive in all three practice sessions at the Dutch circuit, topping the combined timesheet by almost six tenths of a second before qualifying on pole for the first time in his grand prix career.

His Sunday afternoon unravelled quickly, however, with the Australian exiting the first corner in third position before being shuffled to the back end of the lead pack which initially numbered seven, then eight, bikes.

He was back up to fifth when he ran all the way out to the gravel trap at Turn 3 on Lap 10, dropping to 12th, then crashed his ONEXOX TKKR SAG entry at the Timmer chicane at the end of that lap.

“I felt good in every session and was made up to get my first pole yesterday. Warm up was also good and, in the race, certainly at the beginning, I felt good and think we could have won today.”

The season to date has been a bittersweet one for Gardner, who missed a maiden grand prix podium by 0.002s in Round 1 in Qatar, then took ‘revenge’ in finishing second in the following race in Argentina.

However, he suffered concussion and later revealed a broken collarbone after a frightening highside near the head of the pack in Jerez, and also crashed out of two of the next three races.

The son of 1987 500cc world champion Wayne also endured two injury-interrupted seasons at Tech3 before his switch to Stop And Go Racing Team and a Kalex in 2019.

Neither Gardner nor SAG addressed a report from the television world feed that his bike had developed a false neutral which might have explained the first off and subsequent spill, but the 21-year-old did refer to continued bad luck.

“It just seems that whatever I do at the moment it goes wrong, but the luck has to change,” he reasoned.

“I am so disappointed for me, the team, all my sponsors and the fans that are being so supportive this year.

“The good thing is that I don’t have to wait too long to ride again so let’s focus on the Sachsenring.”

Gardner wasn’t alone in tumbling out of contention as a hotly contested race was decided in no small part by attrition.

Brad Binder (Red Bull KTM Ajo) led at the end of each of the first 18 laps but that statistic belied the nature of the battle.

The final quarter of the 24-lap race started with a duel between Binder and Marquez, before Vierge went down at the Strubben on Lap 20, and while Luthi somehow stayed up despite hitting Bike #97, Enea Bastianini (Italtrans Kalex) was not so lucky.

On the penultimate lap, Lorenzo Baldassarri shaped for a move on first placed Marquez at Turn 4 but lost the front of his Pons Kalex and took the championship leader down with him.

Fernandez inherited the lead and went on to take a maiden Moto2 win as Binder finished second and Luca Marini (Sky Racing VR46 Kalex) third, while fourth was enough for Luthi to move past Marquez in the title race.

Lowes had already crashed out due to an apparent touch from Martin, who had a stack of his own later in the race.

The next stop is Germany’s Sachsenring, this coming weekend (July 5-7).

The Australian has dropped his Kalex at the Geert Timmer chicane! 🥺#DutchGP 🇳🇱 pic.twitter.com/xWd60Yde0g