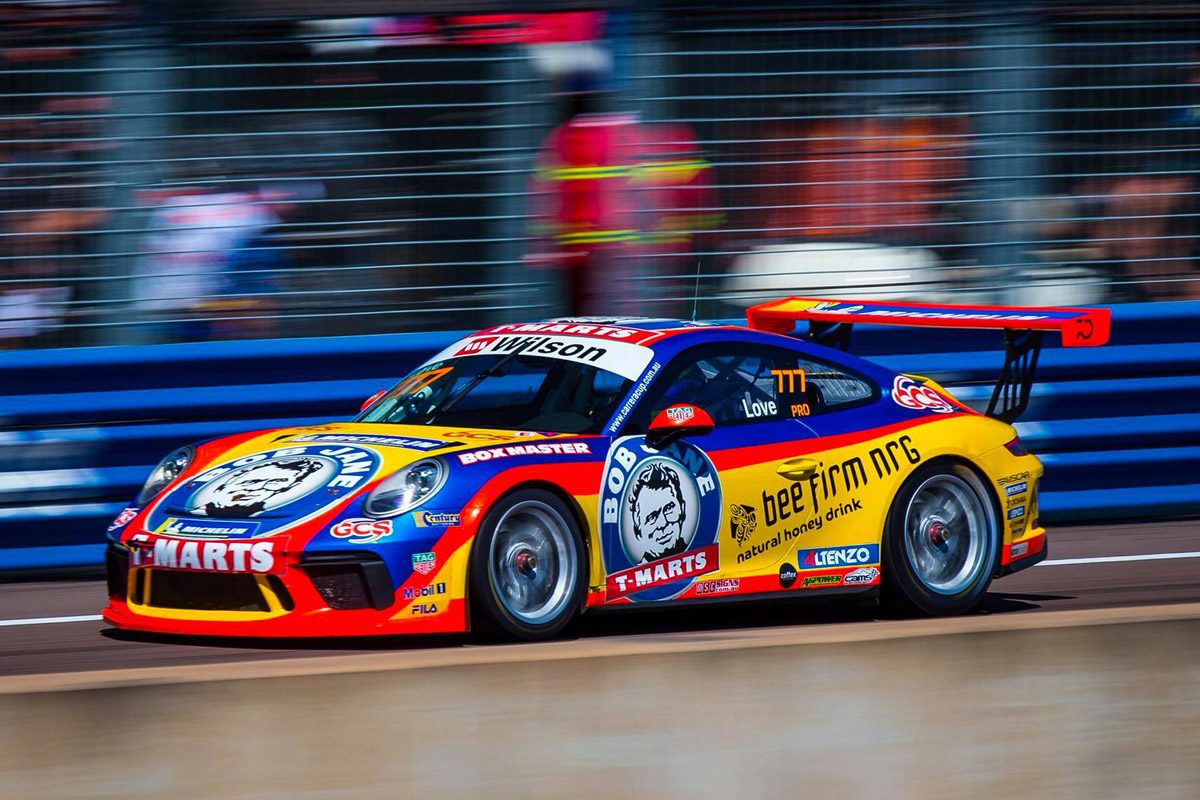 The Sonic driver was the innocent victim of a clash between Dean Cook and Liam Talbot at Hidden Valley, which sent the latter skating across the track before collecting the hapless Love.

The opening lap incident eliminated both from the race, and left Love with a broken fifth metacarpal in his left hand.

“I broke the fifth metacarpal in my hand, which is basically the bone that comes out of my pinky,” Love told Speedcafe.com.

“So snapped that in half and had surgery the Monday after and had a plate and seven screws put in, but considering that was only a week and a half ago it’s feeling pretty good.

“Just going through the process of rehab and getting it ready to go for Townsville.”

Despite the injury, Love expects to be on track in Townsville, a circuit Carrera Cup hasn’t visited since 2015.

“At this stage it’ll just add a degree of difficulty, it obviously won’t stop me from driving; you’ll have to do a fair bit to stop me from going out and having a crack,” he explained.

“I think it will just add a little bit of a degree of difficulty, but I think it’ll be okay.

“Little bit easier obviously with the paddle shift, and the Porsche steering is not exactly heavy in them either, so it’s not too bad.

“To be honest, I haven’t even driven a road car really since the accident happened.

“I’m not too sure what it’s going mean when I jump in the car in Townsville, but in terms of day to day stuff it’s still a bit sore.

“I’m just really trying to stay off it and rest it. I haven’t really experimented with it too much in what I can and can’t do because I’m trying to just get it as best as I can for Townsville.

“Obviously I’ve never driven a Cup car there before, but we’re going in pretty open handed and just like we’ve treated every other event.

“At the end of the day we always aim to be up the front.”

Halfway through the 2019 campaign, it’s a season that has largely lived up to expectations for the Western Australia native.

However, a tough weekend at Darwin saw him leave the Top End with no points while title rival Wood finished on the podium in all three races.

“Until Darwin it was pretty good, I couldn’t complain,” said Love of his year to date.

“Even at Darwin qualifying was fairly average, and that was of no fault of my own, but in Race 1 to convert a poor qualifying, as in position nine to come out with a third place result in Race 1, I put that up there with one of my favourite and one of my best races thus far.

“Some of the guys upstairs thought that there were a few things that weren’t appropriate, so obviously got a few penalties for Race 1, hence why we were down the back to start Race 2.”

Carrera Cup continues at the Watpac Townsville SuperSprint on July 5-7.