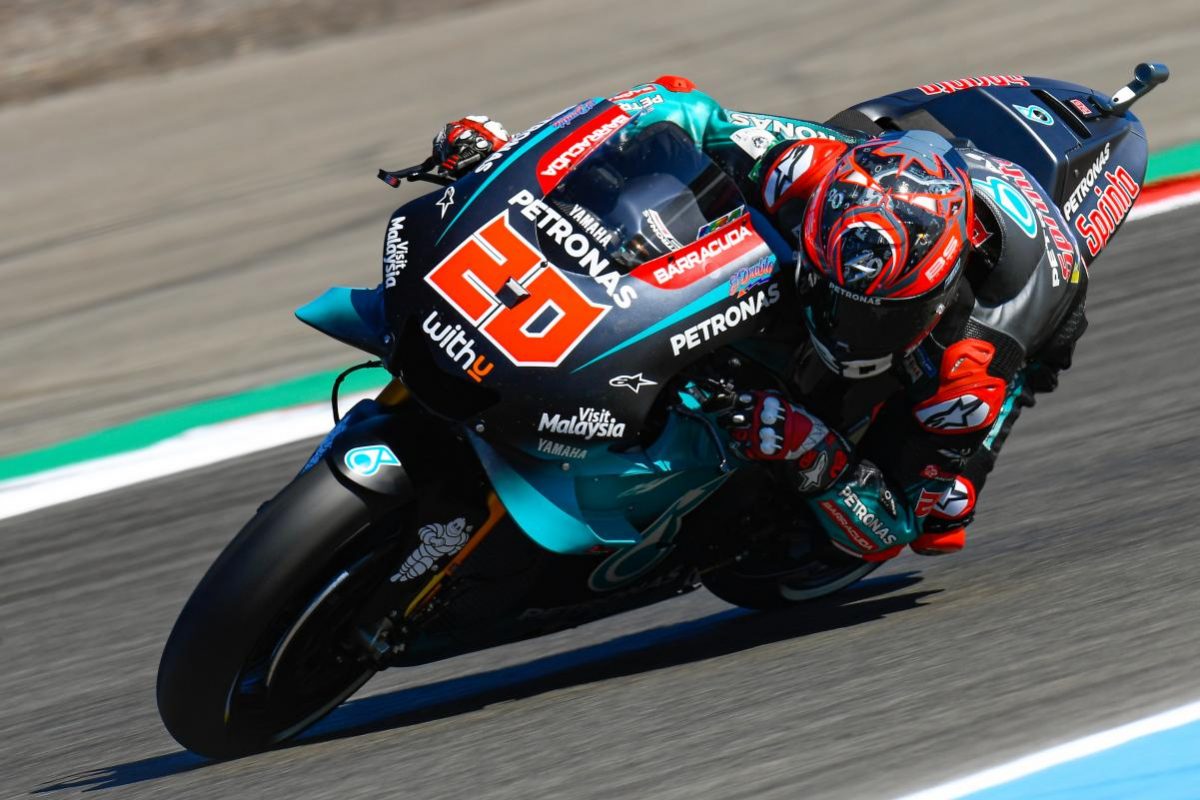 Fabio Quartararo has broken the all time lap record at Assen to qualify on pole position for the Dutch TT.

The Petronas SRT Yamaha rider set a 1:32.017s which denied factory counterpart Maverick Viñales pole by 0.140s, while Suzuki Ecstar’s Alex Rins qualified on the outside of the front row.

Marc Marquez missed the front row for the first time all season in going fourth fastest on his Repsol Honda, while Jack Miller was 10th and Andrea Dovizioso only 11th.

Dovizioso was last after the first runs of the dozen riders who made it to Qualifying 2, while Rins sat atop the timing screen with a then-record 1:32.461s.

Viñales was first to start his second run and took his Monster Energy Yamaha to a 1:32.157s, elevating himself from third position.

Quartararo therefore dropped to third but then set a time on his next flyer which makes the 20-year-old the youngest back-to-back premier class pole-sitter.

The Frenchman got close to the 1:31s bracket with the chequered flag out but the lap went away in the final two sectors.

Rins, who came from Q1, chipped 0.003s out of his personal best on his second run to consolidate third position, while Marquez saved a lowside at Turn 1 on his way to fourth.

Joan Mir made it two Suzukis in the top five and Castrol LCR Honda’s Cal Crutchlow completes the second row.

Dovizioso appeared preoccupied with trying to avoid giving Marquez a tow when the Spaniard cleverly followed the lowly placed Italian on his second run.

While his 1:33.692s was Dovizioso’s best lap by far, the #04 Mission Winnow Ducati remained mired on the fourth row of the grid.

Pol Espargaro, who had an overnight trip to hospital due to pain which lingered from a crash in the Barcelona post-race test, qualified 12th on his Red Bull KTM Factory entry after also going into Q1.

In 14th is Valentino Rossi, who only briefly looked like making it out of Q1 on the #46 Monster Energy Yamaha.

The Italian would have been fifth on combined times from the first three practice sessions but lost his best lap in Free Practice 3 for breaching track limits at the Timmer Chicane, consigning him to the first 15-minute period of qualifying.

Jorge Lorenzo (Repsol Honda) was withdrawn after fracturing vertebrae when he went tumbling through the gravel trap during FP1 on Friday.

The eighth race of the season, scheduled for 26 laps, is set to start on Sunday night at 2200 AEST.