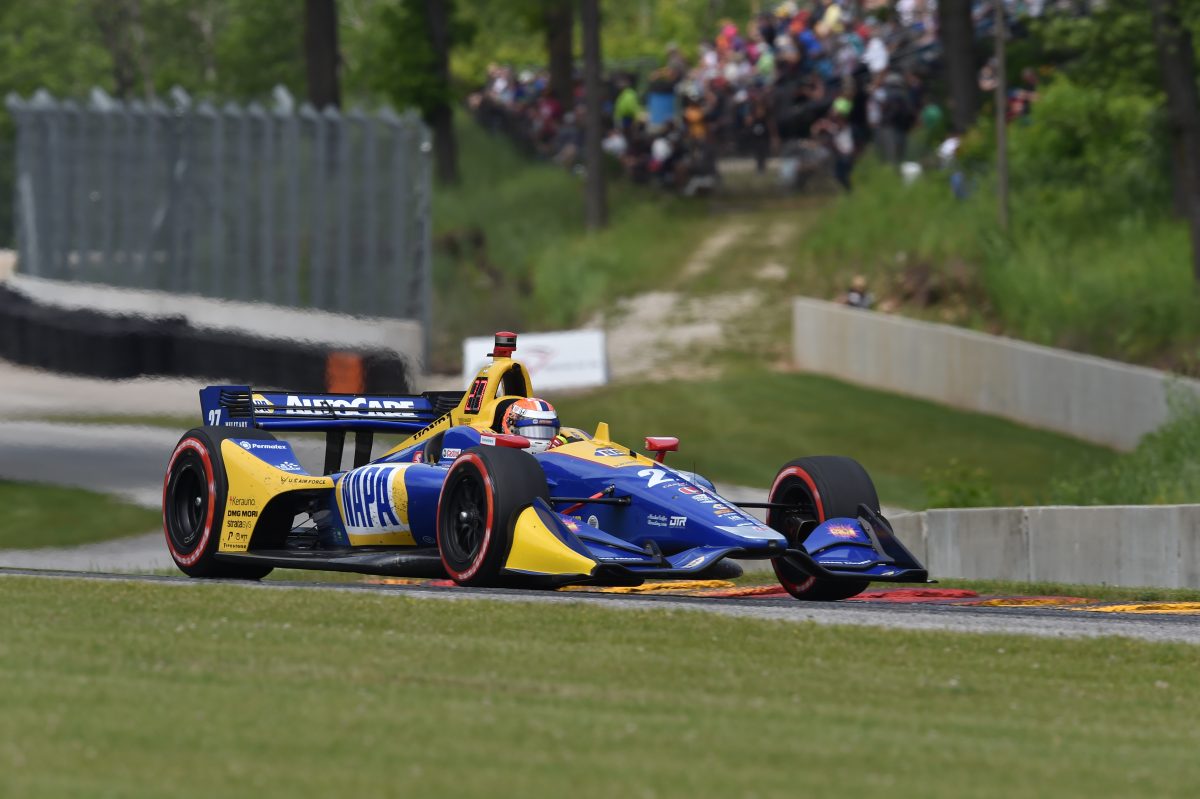 Alexander Rossi won the Road America IndyCar race by almost half a minute while Will Power was the best of the rest.

Rossi led 54 of 55 laps to reduce Josef Newgarden’s series lead to seven points after the Team Penske driver finished on the final step of the podium.

Scott Dixon came from last after a spin on Lap 1 to finish fifth, one position behind Graham Rahal.

Rossi went to the outside Colton Herta (#88 Harding Steinbrenner Racing Honda) at the first corner and stuck with the pole-sitter, exiting Turn 3 in top spot.

Power was third, from Rahal, Takuma Sato (#30 Rahal Letterman Lanigan Honda), and the #2 Chevrolet of Newgarden.

Herta got around four seconds clear of Power before the Queenslander reeled him back in and made a bold outside move at Turn 5 on Lap 13.

The pair touched but the #12 Team Penske Chevrolet took up second position while Herta made what should have been a routine pit stop at the end of the lap, only to lose time due to a refuelling issue.

Rossi and Power, among others, completed the cycle a lap later and they continued to run first and second, although the #27 Andretti Autosport Honda was eight seconds clear.

But for two more pit stop cycles, the top three remained the same until the chequered flag.

Rossi ended the 43rd lap in third position as the last pit stops were taking place, the only time he did not officially lead the race, and he went on to take victory by 28.4391s.

Power was another 3.4052s up on team-mate Newgarden, while Rahal emerged back in front of Hinchcliffe after pitting for the last time on Lap 42.

The contest for fifth was a genuine scrap, ultimately resolved in favour of Dixon when he dragged past Herta at the start of the final lap.

Dixon started 12th after an engine failure at the end of the first part of qualifying and was helped into a spin by Ryan Hunter-Reay (#28 Andretti Autosport Honda) when the Kiwi made an untidy run through the fifth corner.

As a rare starter on primary tyres, Dixon took advantage of the fading rubber of many around him to pass 10 cars on the road in his first stint, and was 10th once the initial pit stops had been done.

He got by Santino Ferrucci (#19 Dale Coyne Racing Honda) on Lap 17 then profited from a stoush between Pagenaud and Herta to go up to seventh on Lap 21.

Herta re-passed the #9 Chip Ganassi Honda on Lap 25, and they were sixth and seventh respectively following the pit stops which fell shortly after, behind Hinchcliffe and Rahal.

They stayed that way through the third stint, before Herta ebbed and flowed in the final stint by being the odd one out on alternate tyres at that end of the field.

When Hinchcliffe and Herta battled over fifth, Dixon was able to pinch sixth from the former at Turn 5 on Lap 54, before putting his final move on the rookie.

In the end it was Dixon’s team-mate, Felix Rosenqvist (#10 Honda) in sixth, from Hinchcliffe, Herta, Pagenaud, and Sato.