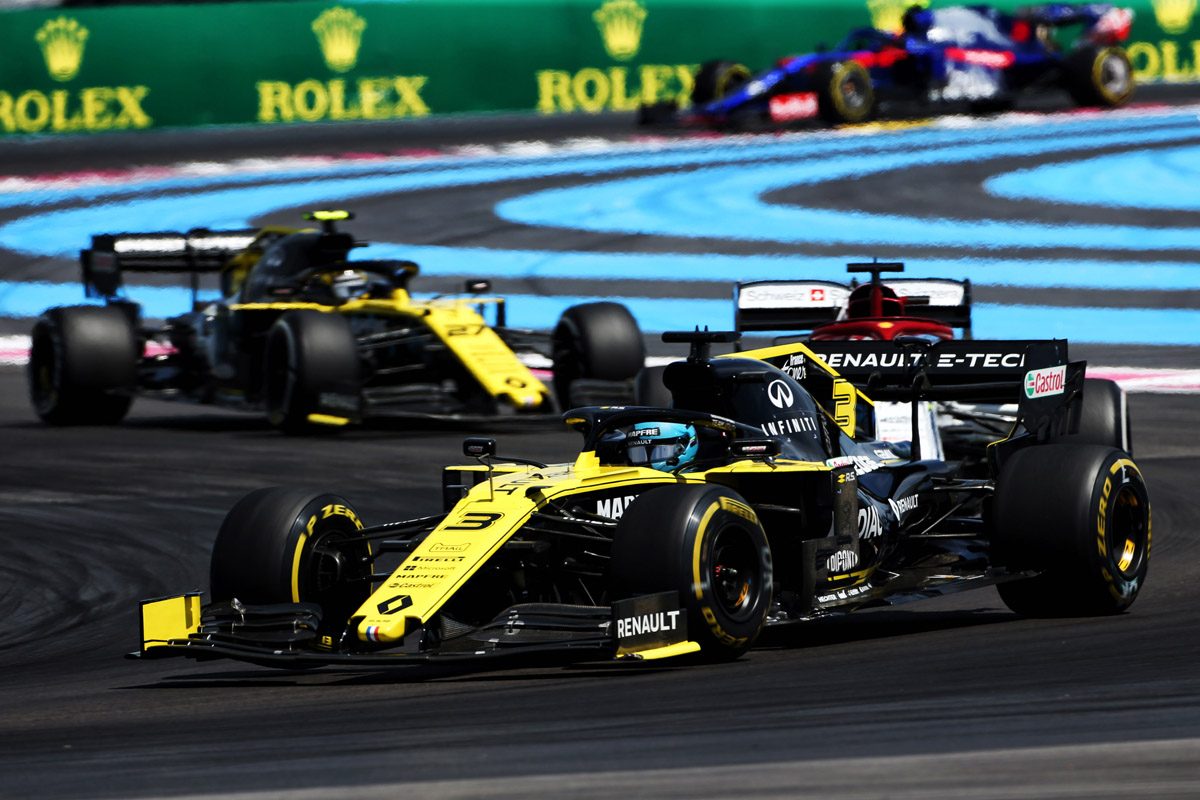 Daniel Ricciardo has criticised the television coverage of the French Grand Prix after it cut away from a four-way battle on the final lap.

Ricciardo was engaged in a battle with Lando Norris, Kimi Raikkonen, and Nico Hulkenberg as the quartet powered onto the Mistral Straight on the final lap.

However, rather than following the battle coverage instead switched to Valtteri Bottas, who had Charles Leclerc chasing hard.

It meant live pictures missed the most exciting moment of the race, a point not missed by Ricciardo.

“I hear they didn’t even show it live on TV,” Ricciardo bemoaned following the race.

“So bit a joke – it was the only battle on track.”

The move ultimately resulted in an investigation after both Ricciardo and Norris ran off the road at points.

Ricciardo braked around the outside of Norris into the Mistral Straight chicane, running deep and dropping all four wheels off the road exiting the initial right hander.

He subsequently forced Norris off the road as he rejoined, before a slipstream battle with Raikkonen and Hulkenberg saw the Australian again dip four wheels over the white line.

“I care but I don’t care in that I’m glad I tried it and had a crack,” he responded when asked if he expects a penalty from the investigation.

“I was certainly trying to pull it up and keep it all on there. It was tight.

“I’m getting more comfortable with the car in a racing conditions, but still not quite where I was with a Red Bull.

“When I do brake on the limit I’m just, I mean I feel I’m always on the limit of pulling the car up. But it was fun, the last few laps really came alive.

Ricciardo got to the line in seventh, two places up on team-mate Hulkenberg, the pair giving Renault its second double points finish in succession.

It’s a positive development following the Canadian Grand Prix, even if the Renault was only the fifth fastest at best in France.

“I don’t feel I had let’s say the fastest car today in terms of what I think it’s capable with that car,” Ricciardo said.

“It wasn’t perfect, but to still get double points and to keep the McLarens in sight was good considering how strong they were all weekend.

“Still a bit of learning to do but if we come away with a seventh and ninth we couldn’t be happier with that.”

Renault sits fifth in the constructors’ championship, three points behind McLaren with 36 points.

Formula 1 next heads to the Red Bull Ring in Austria next weekend, June 28-30.