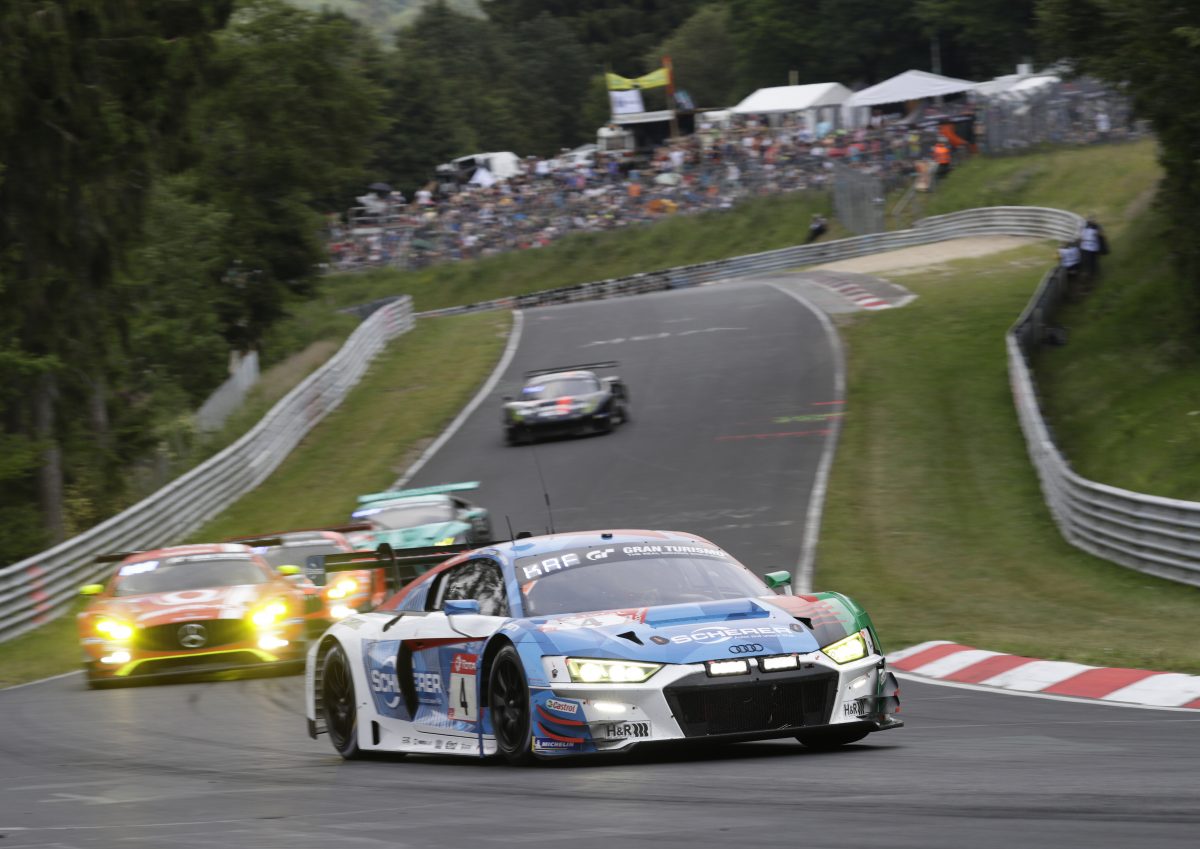 Audi Sport Team Phoenix emerged victorious in an action-packed 24 Hours of Nürburgring that proved to be a race of attrition.

Dries Vanthoor brought the #4 Audi R8 LMS GT3 that he shares with Pierre Kaffer, Frank Stippler, and Frédéric Vervisch to the line in first place with 157 laps to the winning car’s name.

The Manthey Porsche dominated most of the race, leading for more than 12 hours before copping a five-minute, 32 second stop and go penalty in the final quarter of the race for “not respecting speed limit during flag signals”.

Following the #2 Black Falcon Mercedes-AMG GT3’s accident in the eighth hour, the #911 Manthey-Racing Porsche took over the lead and pulled away from the rest of the field through the night.

Its closest challengers remained two minutes further back even as the sun rose on Sunday morning with the #48 Mann Filter Mercedes sitting second.

The battle behind the leader was furious, however, with Mathieu Jaminet moving the #31 Frikadelli Racing Team Porsche into second position shortly after sunrise before a penalty for a pit stop procedure violation saw them drop back to third.

Australian Josh Burdon was involved in a nasty crash in the opening quarter of the race, ending the Tasmanian’s run on the spot.

Raffaele Marciello maintained a cushion in second place aboard the Mann Filter Mercedes but it was the Frikadelli Porsche of Sven Müller which came under attack in third during the 18th hour.

Müller was caught by Christopher Haase (#29 Audi Sport Team Land), Stippler and Nico Bastian (#6 Black Falcon Mercedes), with all three slipstreaming by Müller in close quarters on the Döttinger Höhe.

In the next round of pit stops the Frikadelli car re-gained third and overtook Maxi Götz’s #48 Mercedes for second as the Audis continued to duel.

Mann Filter’s hopes came to an abrupt end when Götz hit the barrier at Hohe Acht and had to be towed back with just over five hours left on the clock.

Gabriele Piana in the #6 Black Falcon Mercedes vaulted ahead of the Rene Rast’s #29 Land car in the pits for fourth, splitting the Audis until contact between Rast and Piana on the Döttinger Höhe saw the latter pit for brief repairs and re-join back in fifth. 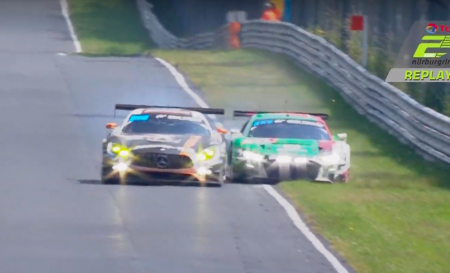 Piana and Rast come together at high speech on the Döttinger Höhe pic: N24

Chaos ensued with a few hours remaining as the leading contenders struck trouble in quick succession.

Matt Campbell suffered a puncture at the wheel of the second-placed Frikadelli Porsche, delaying the car as it limped back to the pits, dropping to fifth in the process.

That was until the car stopped on track at the Hatzenbach in the hands of Jaminet and was pushed behind the barriers.

Confirmation of the leading #911 Manthey-Racing Porsche’s penalty came with three hours to go, the car serving the stop and go in its next pit stop.

Bastian crashed the #6 Mercedes at Brunchen, and then effective leader Kelvin van der Linde picked up a puncture and destroyed the right-rear of his #29 Land Audi, pulling off to the side of the track.

All of this left the Vervisch-driven #4 Phoenix Racing Audi in the lead and once the #911 served its penalty, Laurens Vanthoor in second, 45s behind.

By the final round of stops, Vanthoor had brought the gap down to 35s, with the Belgian handing over to Kevin Estre for the finish and Vervisch making way for Dries Vanthoor.

The gap inflated to 53s after the stops in favour of the Audi as a result of a one-lap difference in strategy, though Estre was not able to close within striking distance of the win before the chequered flag.