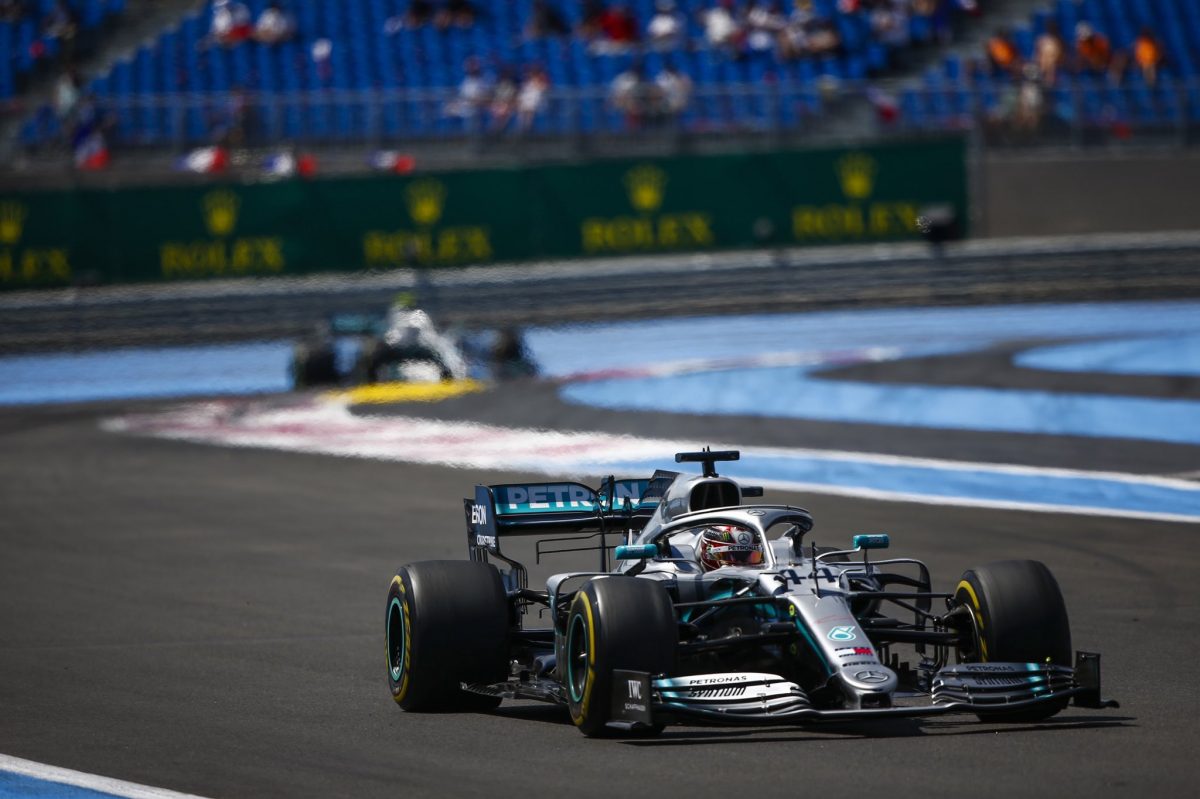 Hamilton headed the field into the opening corner and was never challenged, taking his sixth win of the season from team-mate Valtteri Bottas.

The two Mercedes dominated proceedings, comfortably extending an advantage in the opening laps before managing the race over third placed Charles Leclerc.

Hamilton moved into a clear lead and opened a small advantage over second placed Bottas in a start that otherwise saw the leaders all maintain position on the opening lap.

A move by Sergio Perez, which saw the Racing Point driver take to the escape route at Turn 3, was subsequently investigated for leaving the track and gaining an advantage.

It resulted in a five second time penalty, served at the Mexican’s first pit stop.

Vettel moved through on Norris to take sixth place midway through the fifth lap, the Ferrari driver late on the brakes into the chicane midway up the Mistral Straight.

Vettel continued his march forward, passing Sainz on Lap 7 in the same manner as he had dispatched the other McLaren two laps earlier.

Having dropped two positions on a single lap, Giovinazzi was the first into the lane to exchange his soft compound tyres for a set of the white-walled hards with just seven laps under his belt.

Ricciardo stopped at the end of Lap 17 as he battled Pierre Gasly, Renault seeking to undercut the Red Bull.

Predictably, Gasly swapped his soft compound tyres for a set of the hards at the next opportunity, rejoining ahead of Ricciardo to maintain his place.

The advantage lasted only half a lap, Ricciardo sweeping by courtesy of DRS into the Mistral Straight chicane.

Covering off both Ricciardo and Gasly, McLaren stopped Norris at the end of Lap 18, and Sainz the following lap.

Max Verstappen was the first of the front-runners to stop, taking to the lane on Lap 21 after running fourth.

That triggered Ferrari into action, leaving Vettel out for a long opening stint and calling Leclerc in the lap after Verstappen had stopped.

Bottas stopped from second at the end of the 23rd lap, rejoining in third behind Vettel who was yet to stop.

Hamilton followed on the next lap, rejoining without dropping a place even to Vettel, who locked up at the first corner and pitted at the end of the lap.

It left Vettel fifth on the round, but with tyres five laps newer than Verstappen’s ahead, though the German was unable to use them to challenge the Red Bull.

In the closing stages Norris was told not to use DRS, and subsequently complained of harsh upshifts for the seventh placed runner.

He was subsequently told of a series of problems that would manifest in the car, including a problem with the differential and steering.

Ninth placed Kimi Raikkonen came under late pressure from Nico Hulkenberg, the Renault no match for the Alfa Romeo in a straight line.

It left the German powerless to pass Raikkonen, who narrowly maintained the position to the flag.

A late stop from Ferrari saw Vettel stop in an effort to claim the point for fastest lap, which he stole from Hamilton on the final lap.

With two laps remaining, Ricciardo closed in on the back of Norris’ ailing McLaren with Raikkonen and Hulkenberg joining the fray on the final lap.

Norris lost out on the Mistral Straight, dropping three positions on the final lap to sink to 10th.

The battle got fraught as Ricciardo ran off the track twice while passing Norris and then battling with Raikkonen.

It saw the two Renaults and the Alfa Romeo run three-wide on the approach to Signes, a skirmish investigated by officials after the race.

Bottas came under late pressure from Leclerc, the Mercedes driver holding on from Leclerc by just over a second at the flag.

Out front, Hamilton carried on his serene way to the chequered flag, leading every lap to take his 79th career win.

The result moved his points advantage to 36 over Bottas at the head of the championship standings, and continued Mercedes’ winning streak.

The Anglo-German squad has claimed all eight races in 2019, while its streak stands at 10 races stretching to the end of 2018.

It opens the prospect of Mercedes equaling the 31-year-old record for most consecutive race wins in Formula 1 history; a record set by McLaren in 1988 with 11.

The sport now moves on to the Red Bull Ring for the Austrian Grand Prix on June 28-30.