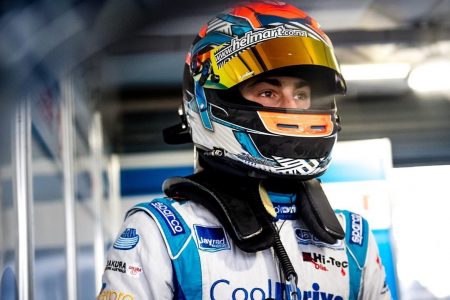 The 24-year-old has posted a new benchmark for chest-to-ground burpees after completing 870 in an hour, surpassing the previous record by 19.

Jones has been training to break the record for some time before attempting the feat at Crossfit Wodonga gym on Saturday night, with the assistance of his race engineer Julian Stannard and mechanics.

Information will now be sent to Guinness for processing before Jones will officially become a Guinness World Record holder.

“I think going for the record was something I wanted to do to challenge myself and tie in the training for my racing,” Jones told Speedcafe.com.

“It really pushed me outside my comfort zone and requiring me to dig deep to just keep going.

“Racing cars is mentally taxing and for me the burpees are no different, it’s about staying focused, get your head down, hustle.

“It was great to have a few of the BJR mechanics and engineers there, with Julian Stannard on the strategy with an Excel sheet ready for pacing, encouragement and some radio chat per se.

“It’s a long procedure for all the information to be processed by Guinness World Records but I’m very excited for the result and something sort of fun in a way to do outside of racing.”

Jones, racing in his rookie season in the Supercars Championship, is currently 22nd in the standings.

Well a big day! Got a new Burpee world record – mental battle for sure, thanks to the @bjrsupercars for the support! Thanks to @alphafit_aus for their support over the years, helping me get fit for this challenge 🙂 Still have the approval process to do but very happy with the result 😁#burpee #supercars #vasc #bjr #mj21 #fitness #paleo #guinessworldrecord #funtimes #bignightnarbigday