Australian Josh Burdon has walked away from a nasty crash at the 24 Hours of Nürburgring. 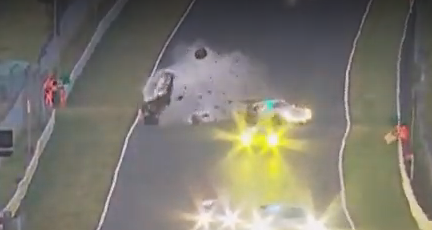 The moment of impact pic: N24

Burdon was running 18th at the time of the incident behind the wheel of the #38 Nissan GT-R Nismo GT3 in Hour 7 of the race.

The Tasmanian slowed approaching a Code 60 zone on the Nordschleife’s Döttinger Höhe and was collected by the #135 Porsche Cayman S which failed to react to the slow zone and slammed into the back of Burdon.

It sent the Roberto Falcon-driven Porsche into the air at high speed before crashing back down and barrel rolling a number of times, while the Nissan was punted into the barrier on driver’s left.

Such was the impact that it tore the right rear corner off the Nissan and destroyed the Cayman, leaving a large debris field across the track.

Both drivers climbed from their stricken cars under their own power and were attended to by the marshals and medical crews at the scene.

Moments earlier there was also drama for the other Australian in the field, Matt Campbell, who had a wild moment while battling for third in the #31 Frikadelli Racing Porsche 911 GT3-R.

With an intervention vehicle on the road at Schwedenkreuz, Campbell was forced to take to the grass on driver’s right of the outside of the fast, sweeping corner.

Campbell’s Porsche slapped the armco but the Warwick-native kept on going unhindered, with the car running fourth at the end of Hour 9.

The first quarter of the race had been filled with incidents from the start, including the Octane 126 Ferrari 488 GT3 going up in flames at the start of the third hour.

Driver Alexander Prinz escaped from the car and eventually extinguished the fire on his own. 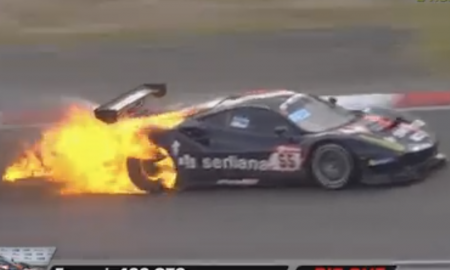 Four of the five Pro-class BMW entries dropped out of contention early in the race after a raft of problems.

Compounding the BMW camp’s troubles, the #42 Team Schnitzer entry crashed at Brünnchen in the hands of Timo Scheider, leaving the #33 Falken Motorsports M6 in 14th position as BMW’s only contender.

The leading #2 Black Falcon Mercedes-AMG GT3 was forced into the garage after Adam Christodoulou made contact with a Toyota Supra GR at the first corner.

This leaves the #911 Manthey-Racing Porsche at the head of the field with Michael Christensen steering with 15 hours remaining as the night part of the race begins.