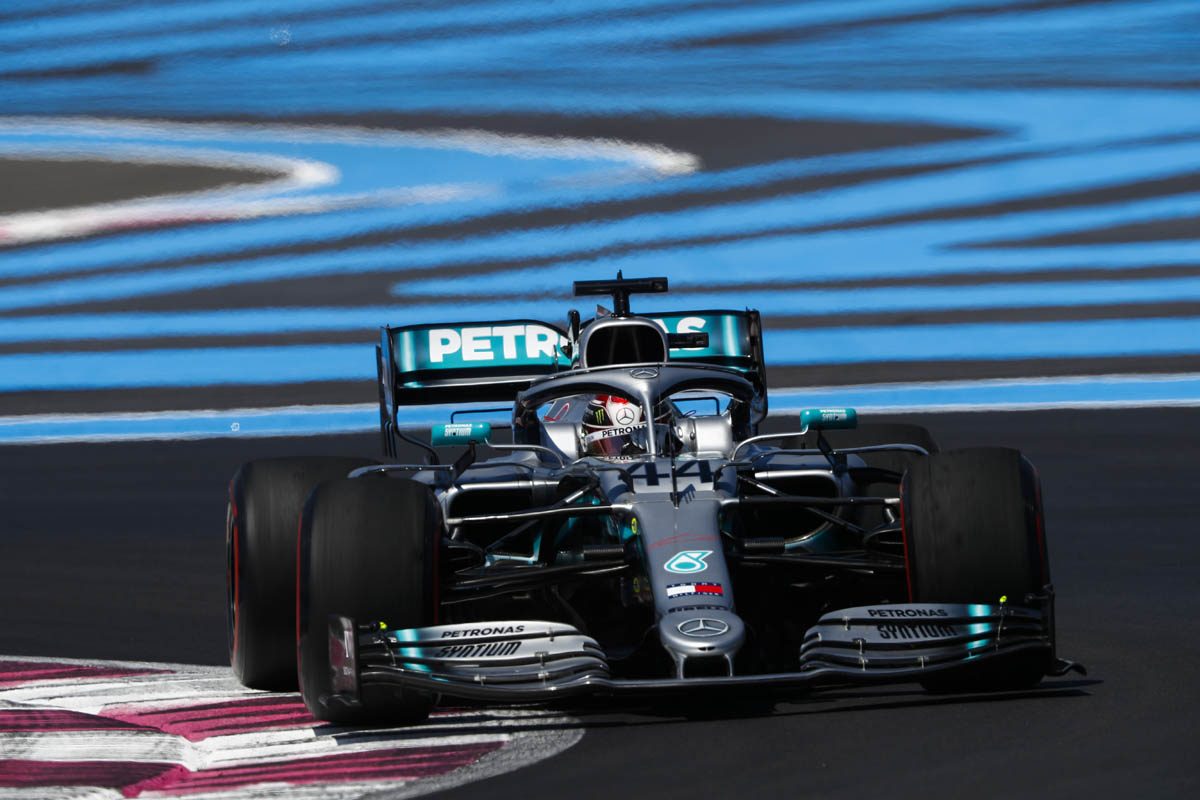 Lewis Hamilton has set a new track record as he headed a Mercedes one-two over Valtteri Bottas in qualifying for the Formula 1 French Grand Prix.

The Mercedes duo were never troubled throughout the session, easing their way into the final phase of the session without needing to bolt on the fastest, soft compound tyres.

Once they did, Hamilton went six tenths faster than the nearest non-Mercedes challenger, Charles Leclerc, and more than a quarter of a second quicker than Bottas.

Sebastian Vettel struggled to seventh, completing just a single timed lap in Qualifying 3, while Daniel Ricciardo will line up eighth.

An impressive performance from McLaren saw the English team claim the third row as its own, with Lando Norris just over a tenth clear of Carlos Sainz.

An incident between Kimi Raikkonen and Romain Grosjean proved the biggest talking point from the opening phase of the three-part qualifying session.

Raikkonen left the track at Beausset, the long right hander following the flat out Signes corner at the end of the back straight.

The Finn rejoined the track as Romain Grosjean rounded the corner, forcing the Frenchman to second guess Raikkonen’s next move.

The trigger appeared to be Ricciardo, Raikkonen narrowly rounding the outside of the Renault on corner entry before he lost the back end and slid off the road.

It was as Raikkonen rejoined that he caused Grosjean to hesitate, ruining the lap and thereby triggering a post-session investigation.

Hamilton set the early pace in Qualifying 2, recording a lap half a second faster than Bottas.

Leclerc slotted in third ahead of Max Verstappen, Vettel only capable of the fifth best time after his first run.

Nico Hulkenberg followed, the first of the runners to use the soft compound tyres.

The first to bank a second flying lap, Bottas improved to go fastest by just under a tenth of a second with a 1:29.437s.

By contrast Hamilton had returned to the pit, rather than take another lap worth of life out of the tyre on which he will start Sunday’s race.

The Silver Arrows were comfortably clear of the field, by more than six tenths in fact, with the fastest Ferrari over a second behind Bottas midway through the session.

That margin didn’t last, with Leclerc moving to within half a second of the provisional pole time, and bumping Verstappen to fourth.

With no time on the board, Ricciardo headed out on a set of medium compound tyres with just under six minutes remaining in the session.

Verstappen had a lap deleted for exceeding track limits at Turn 6, though it proved a moot point as he improved on the lap he lost to book his place in Qualifying 3.

A wild moment from Sainz at the opening corner as he begun his final flying lap saw the Spaniard abort the effort, his earlier time leaving him comparatively safe in sixth.

Shortly after Sainz crossed the line, Norris moved up to fourth to confirm McLaren’s impressive pace from practice, while Red Bull’s Pierre Gasly made had to use a set of soft compound tyres to ensure he progressed.

Ricciardo made the cut in eighth place while both Mercedes drivers rehearsed their Qualifying 3 runs, only to slow down in the final moments of the lap to ensure their fastest time wasn’t set (and therefore would not have to start the race) on the soft compound tyres.

A game of cat and mouse developed as teams sent their drivers out at the start of Qualifying 3.

Norris headed the field while Sainz followed him down the lane, only to pull over and wait for the rest of the field to trundle by.

The intent seemed to be to give Sainz the benefit of a slipstream down the long Mistral Straight.

Early efforts again favoured Mercedes, with Hamilton’s 1:28.448s more than a tenth clear of Bottas, and half a second clear of Leclerc.

A missed gear and wild slide for Vettel saw the German abort his first lap leaving he and Antonio Giovinazzi as the only drivers not to set a time in the opening minutes of the session.

The entirety of the 10 car field then took to the circuit with just over two minutes to run, Bottas the first to start a timed lap, followed by Hamilton.

Neither were able to improve in the opening sector, though Hamilton was able to dig deep and go fastest of anyone through the middle third of the lap.

At the end of the lap Bottas failed to improve while Hamilton edged out to a 1:28.319s lap.

Sainz went fourth fastest, only to be immediately demoted by Norris as he crossed the line.

The pair were shuffled down a further place by Verstappen while Vettel could muster only seventh on his one and only qualifying lap.

Eighth fastest was Ricciardo, ahead of Gasly and Giovinazzi.

A penalty for Kvyat will see the grid order change, the Toro Rosso driver having taken on a swathe of new engine components.

George Russell will also take a penalty, though with the Williams driver consigned to the back row of the grid it hardly matters.

The French Grand Prix is scheduled to begin at 2310 AEST.