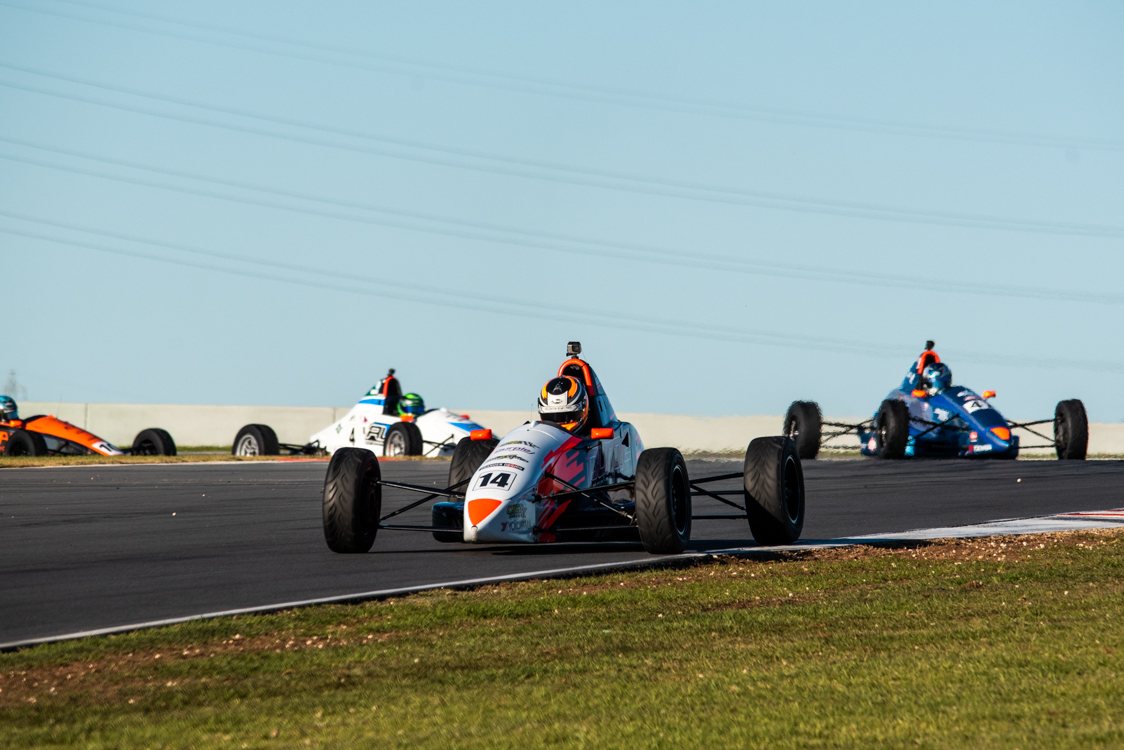 Lachlan Mineeff has claimed his first race and round win in Australian Formula Ford Championship, at The Bend Motorsport Park.

Angelo Mouzouris took victory in Race 2 ahead of Mineeff, after Callum Hedge and Tom Sargent tangled in the final corner.

In Race 3, Mineeff jumped Mouzouris off the start line and was never headed, leaving Sargent, Hedge, Mouzouris and Zac Soutar to fight over the minor places.

In the end, Mineeff took the round win by just a single point from Tom Sargent, who secured a one-two round result for CHE Racing, with Mouzouris (Sonic Motor Racing) finishing third overall. George Miedecke claimed his maiden round win in TA2 after the winner of the first three races, Nathan Herne, was struck down by a differential failure in Race 4.

Miedecke took the lead after Herne slowed with his issue, but had to hold out an attacking Aaron Seton in the closing stages.

The consistent Ashley Jarvis finished third for the round, just ahead of Herne and Andrew Miedecke.

After spinning off the track in Race 3, Hugh McAlister mounted an exciting charge in Race 4, storming from 26th on the grid to sixth. The R-Tek Motorsport driver further lowered The Bend International Circuit record in both Races 2 and 3, and was never seriously challenged in either.

Josh Buchan was best of the rest ahead of Rielly Brook.

Roman Krumins took the National Class win in Race 2, but in Race 3 it was James Wilkins who claimed National honours in his category debut, aboard the Gilmour Racing F307.

After qualifying on pole position, the Shahins achieved second place finishes in the two races, despite lengthy pit stop handicap times burying them in the field in each.

Sam Shahin finished on the tail of Matt Stoupas in Race 1, after Ross Lilley spun away a comfortable lead in the closing stages.

Yasser Shahin took control of the car in Race 2, finishing behind John Morriss.

Stoupas’ consistency enabled him to finish second overall for the round ahead of fellow Audi R8 driver Rod Salmon.

The main casualties were Lamborghini driver Peter Corbett and Porsche racer Rick Mensa, who were eliminated from proceedings in a clash at the start of Race 1, while mechanical problems prevented Kevin Weeks turning a race lap in his Ford GT.

In a cameo return to the category, Ric Shaw took his sixth overall round victory in Mazda RX8 Cup after title contenders Aaron Prosser and Will Harris controversially clashed in Race 3, and Stephen McLaine was ruled out of the final two races with illness.

Harris was penalised for the incident with Prosser in Race 3, but both drivers recovered to finish second (Prosser) and third (Harris) for the weekend overall.

Jason Miller was just behind for the round having held out Prosser and Harris for a well-earned second place in Race 4.

Race 1, 2 and 3 outright (and Class A) winner Joel Heinrich (AU Falcon V8 Supercar) was forced into the pits with dramas in the final affair.

The most controversial moment of the weekend happened in Race 3, when Merrick Malouf (Falcon Ute) made contact with the rear of Scott McGuiness’s Mazda MX5 at Turn 10.

Despite the Race 3 damage, Gillett still salvaged valuable points with third overall in Class B behind Tracey and Brett Mitchell (OzTruck).

Greg Keene took a pair of unchallenged victories in his IROC Porsche after Andrew Whiteside failed to start today’s races.

Glenn Hancox completed a clean sweep of Utes victories to win the round from Charlie Kovacs and Colin Sieders.

Jeremy Payne’s perfect weekend continued in the BMW E30s, winning both races despite a close contest with Jesse Bryan in Race 3.

He therefore secured another round win in the category ahead of Bryan, with Brian Bourke third overall.