Tom Sargent has prevailed in a thrilling opening race for Round 4 of Australian Formula Ford at The Bend Motorsport Park.

Sargent came out on top after a nose-to-tail dice with Sonic Motor Racing team-mates Callum Hedge and Angelo Mouzouris, along with Lachlan Mineeff and Zac Soutar.

A Safety Car was called on the opening lap after an incident involving Harrison Goodman and Paul Di Biase in the first corner.

After the restart, Mouzouris, Sargent and Soutar all swapped the lead several times, Sargent resisting some spirited attacks on the final lap to seal his second race win of the season. 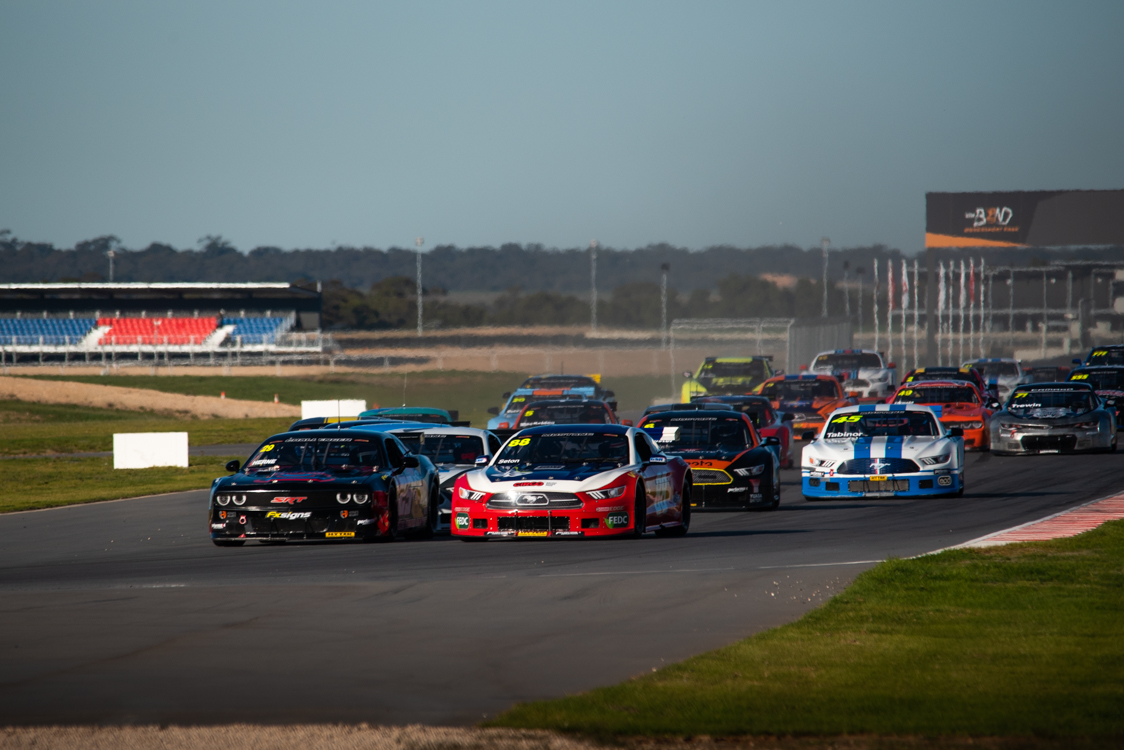 Nathan Herne continued his winning form in TA2, claiming Races 1 and 2 after overcoming challenges from George Miedecke and Aaron Seton.

The Lismore teenager swept into the lead from third on the grid, overtaking Miedecke and Seton on the first lap. From there, he was never headed and powered to a pair of race victories.

Seton was second in Race 1, but Miedecke overtook him in Race 2.

Last year’s series winner, Ashley Jarvis, was fourth in both races ahead of the consistent Hugh McAlister, who survived rear-end contact from Russell Wright in the first race. John Magro has set another lap record on his way to a seventh straight race win in Australian Formula 3 aboard his R-Tek Motorsport Dallara.

Josh Buchan followed Magro closely in the early laps before the Gilmour Racing driver’s challenge faded and he eventually retired with mechanical problems.

Following on from his clean sweep in the previous Mazda RX8 Cup round at Morgan Park, Aaron Prosser added another two victories to his tally with lights-to-flag performances in the first two races of the weekend.

Prosser won Race 1 by a comfortable margin, but was closely challenged by reigning champion Ric Shaw in Race 2.

Stephen McLaine was third in Race 1 ahead of Will Harris, but the positions were reversed in the second race.

For spectators, the highlight was an intense battle just outside the top five, with Ben Silvestro, Nick Dunkley, Paul Grant-Mitchell and Jake Lougher repeatedly swapping places.

The Shahins each set the pace in their 50-minute qualifying sessions in a Lamborghini Gallardo, securing top spot ahead of John Morriss (Porsche 911) and Matt Stoupas (Audi R8).

Joel Heinrich took the outright and Class A victories in the first two Thunder Sports races in his AU Falcon V8 Supercar, but had to work hard for his wins.

In each, the Super2 driver lost the start to Rick Newman and Myles Bond and had to overtake both of them.

Mark Tracey (BMW E36) won Class B in both races ahead of his title rival Cory Gillett.

The hard luck story of the day belonged to Matt Chahda in his Mitsubishi Magna Future Tourer.

Chahda retired from a top-three position in Race 1, and made rapid progress through the field in Race 2, only to be forced out with another mechanical problem.

Greg Keene claimed comfortable wins in the IROC Challenge class in Races 1 and 2.

The Utes competition was much closer, Glenn Hancox and Charlie Kovacs swapping the lead in the two races with Wayne Williams and Colin Sieders not far behind.

Hancox ultimately won both races in his Sieders Racing entry.

Jeremy Payne took out both BMW E30s races ahead of Jesse Bryan and Brian Bourke; Cameron Hudson and Tim Freeman sustained damage due to contact in the first corner.